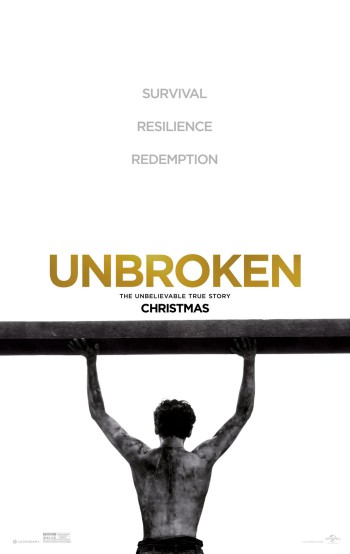 SYNOPSIS: After a near-fatal plane crash during WWII, Olympian Louis Zamperini spends a harrowing 47 days in a raft with two fellow crewmen before he’s caught by the Japanese navy and sent to a prisoner-of-war camp.

REVIEW: I’m a fan of Angelina Jolie for her humanitarian work across the globe, but it’s so awesome to see a female director take on a war story — and do it well. She didn’t shy away from the challenge.

During a press conference for the film that one of my New York writers attended, Jolie said she never would have envisioned making a film that included shark attacks and plane crashes.

“I would never have thought of myself handling that kind of cinematic filmmaking,” she said. “But I cared about the story, so I had to suddenly learn how to do all those things and, and to be honest, it was such an exciting challenge.”

And “Unbroken” is SO well done. The attention to detail, along with the lush cinematography and soundtrack, reminds me of a Clint Eastwood film. It’s that good. But brutal — as it should be, to mirror the actual real-life story.

Based on Laura Hillenbrand’s book “Unbroken,” the film tells the true story of Louis Zamperini (Jack O’Connell), an Olympic athlete who wow’d onlookers during the 1936 Olympics by running the final lap of the 5,000-meter event in a record-breaking 56 seconds.

He later went off to fight during WWII, and after his plane crashed in the Pacific Ocean, survived 47 days adrift in a raft, battling sharks, dehydration and heat. He and his remaining crew member were picked up by a Japanese naval ship, and Zamperini spent two years in a POW camp under brutal conditions. He was continuously beaten and tortured by a sadistic Japanese officer named Watanabe (Takamasa Ishihara), nicknamed “The Bird” because the prisoners couldn’t call him what they wanted to.

“Unbroken” is a remarkable story of strength, grace and forgiveness. Having a bad day? Just think about what Zamperini endured, partly through resourcefulness and grit, partly by holding onto the lessons his brother taught him as a kid when he seemed to be heading in the wrong direction.

The childhood scenes are told in flashbacks, and the film lingers on the raft scenes, which while giving us a sense of the guys’ extended desperation, could have been shortened and replaced with more scenes in the past and future. I would have loved to know a little more about that time, especially how he managed to get through his horrific PTSD after the war.

But look, “Unbroken” is an amazing film about an incredible man that illustrates the power of the human spirit to survive and triumph in the face of unspeakable horror. Be sure to stay through the end credits to see footage of Zamperini, who died shortly before the film was released.

Sex/Nudity: Prisoners of war are forced to strip down so the Japanese can beat them.

Violence/Gore: Lots of war-related violence and horror, including aerial combat, with planes and crewmen firing at other planes, getting shot at, and exploding. After a plane crash, men are lost at sea adrift in a small raft, struggling to survive by eating birds, fish and sharks. A Japanese POW camp is run by a brutal sadist. Prisoners are beaten with sticks, threatened with swords, thrown into isolation cages, and forced into slave labor.

Which Kids Will Like It? Kids 14 and older who like war stories and aren’t disturbed by war violence and brutality.

Will Grownups Like It? Parts of “Unbroken” are difficult to watch, but this film is definitely worth seeing.

Images in this review used courtesy of Universal Pictures and Paula Schwartz.