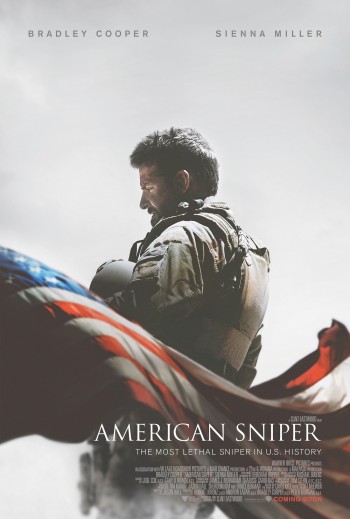 SYNOPSIS: Navy SEAL sniper Chris Kyle’s pinpoint accuracy saves countless lives on the battlefield and turns him into a legend. Back home with his wife and kids after four tours of duty, however, Chris finds that he can’t leave the war behind.

REVIEW: Most directors have a style that is all their own, but there are only a handful who have such a specific style that you know right away if a film you’re watching is theirs. Steven Spielberg, Wes Anderson, Peter Jackson, Darren Aronofsky, David O. Russell and Clint Eastwood are just a few who fall into that category.

Eastwood delivers yet another winner (in more ways than one; it’s nominated for six Oscars, including Best Picture) with “American Sniper,” a quiet, powerful, touching story about the real-life Chris Kyle, known as the most lethal sniper in military history.

Based on Chris’ memoir by the same name, “American Sniper” follows his story from the time he was bullied as a child and his dad told him that “people are either sheep, wolves, or sheepdogs.” Chris ultimately chooses to be a sheepdog and signs up to become a Navy SEAL.

After ditching a doomed relationship, he meets and marries Taya (Sienna Miller). After the 9/11 attacks, he’s sent to Iraq where his mission is to protect his fellow SEALs, but his sniper skills are so lethal that he eventually breaks the record for the most confirmed kills in military history.

Chris earns the nickname “Legend” in Iraq and, much to the chagrin of Taya and, eventually, their two kids, he keeps signing up for more tours of duty until he completes four total. Whenever he’s home, he feels like he should be overseas protecting the soldiers.

When he finally decides to come home for good, Chris finds that he can’t get the war out of his head. He misses the brotherhood of his fellow SEALS, but soon discovers that helping other veterans and victims of PTSD helps to ease his re-entry onto American soil.

Photos of Bradley Cooper and Sienna Miller at NYC “American Sniper” press event; taken by and used with permission of Paula Schwartz.

Eastwood’s imprint is all over this film. It’s a war story, but more than that, it’s a story of the intense push and pull of emotions felt by soldiers like Chris. The scenes morph between brutal war footage to quiet moments when Chris eyes a target through a rifle’s telescopic sight. And yet, those scenes are perhaps the most chilling, especially when his gun is aimed at a child who may or may not have a weapon in his hands that will kill countless American soldiers.

Bradley Cooper — one of the best actors working today, in my view — bulked up to play Chris and adapted his Texas drawl. Cooper immerses himself so deeply into the role that he’s practically unrecognizable. If I was to use one word to describe his performance as Chris, it would be “subtle” — which is exactly what’s needed here. Whether he’s on the other side of the planet protecting soldiers or back home meeting a soldier whose life he saved, Cooper’s acting is always subtle, never over the top.

Sex/Nudity: A woman cheats on her boyfriend, who finds them in the midst of the act. A man picks up a woman in a bar. Some kissing, flirting and foreplay; the woman wears skimpy underwear and the man is shirtless (sex is implied). A woman plays footsie with a man’s crotch under a table.

Violence/Gore: Several scenes of intense war footage, including shooting and  explosions; wounded, bloodied and dead bodies; severed heads and kids in danger. An electric drill is used on a boy’s leg. A woman and a boy appear to be planning to set off a bomb. A sniper kills people throughout the movie.

Drugs/Alcohol: A bar scene includes heavy drinking. A woman drinks too much and throws up.

Which Kids Will Like It? Kids 17 and older who like war stories and aren’t disturbed by war violence and brutality.

Will Grownups Like It? “American Sniper” is a thoughtful look at one man’s involvement in the Iraq war, and his efforts to juggle both war life and home life.

Poster and movie stills in this review used courtesy of Warner Bros.