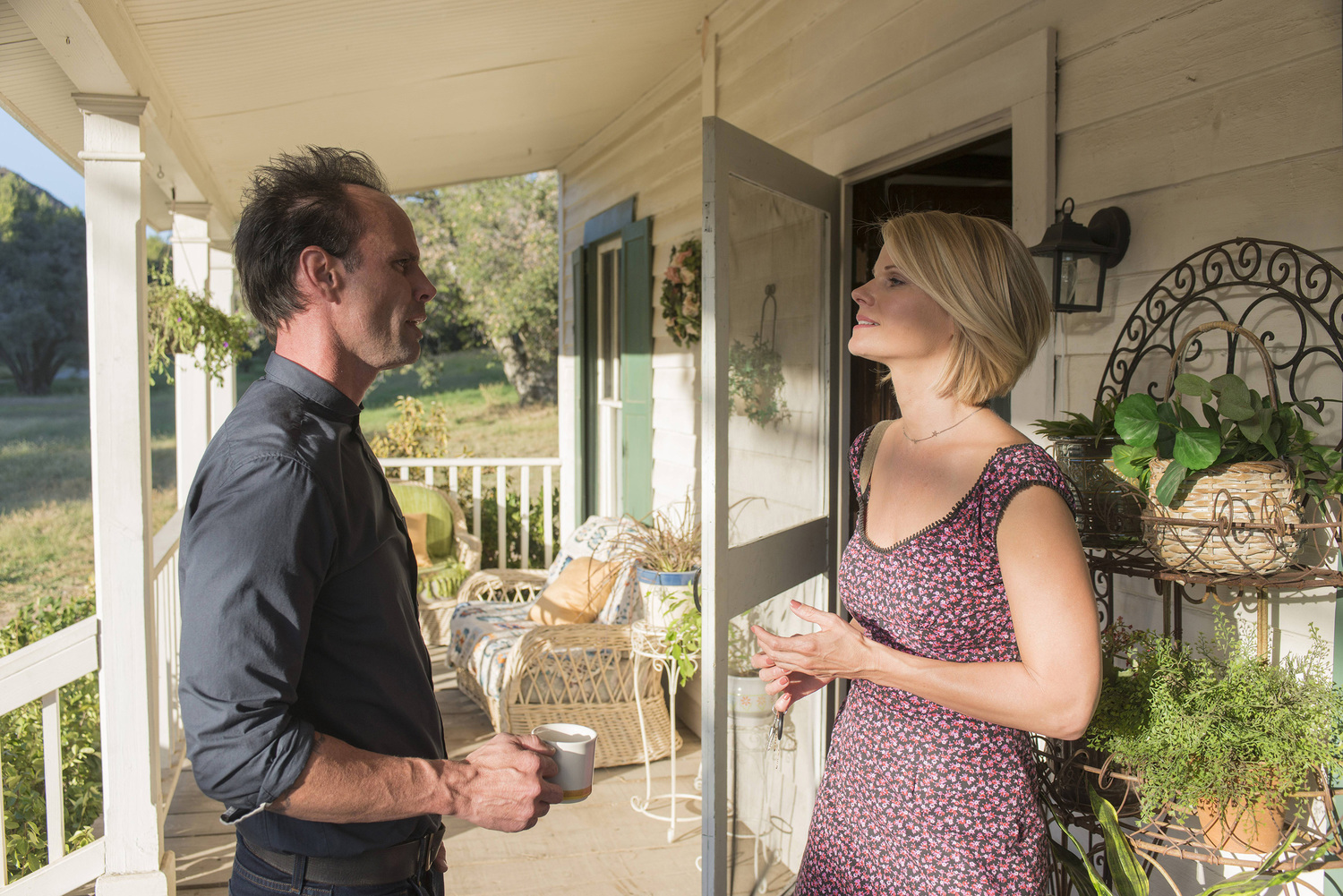 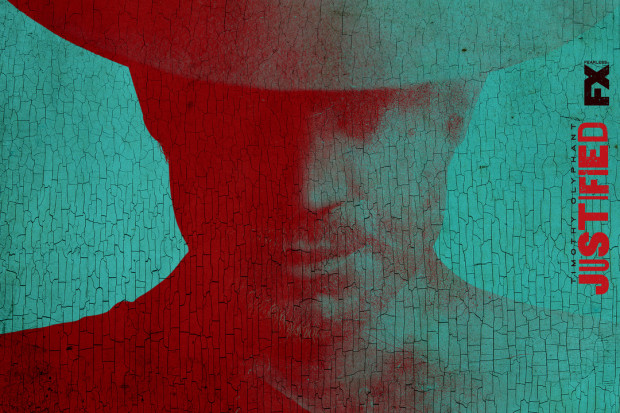 Let me just put this out there: “Justified” is one of my favorite shows, so I’m looking forward to recapping the final season. Yes, the most recent season wasn’t great, nor did it make much sense (I don’t know if I can ever forgive you, Michael Rapaport). But the show soldiered on, as did I, and my devotion was rewarded with a top-notch season six premiere.

“Fate’s Right Hand” was a return to form for the show; it left behind the Crowes and returned the drama to its rightful place, smack-dab between U.S. Marshal Raylan Givens (Timothy Olyphant) and second-rate criminal mastermind Boyd Crowder (Walton Goggins). We start off by checking in with the dream life that awaits Raylan in Florida. His wife Winona (Natalie Zea) watches their daughter fall asleep and wonders what he could possibly be doing that would be worth “missing this.” 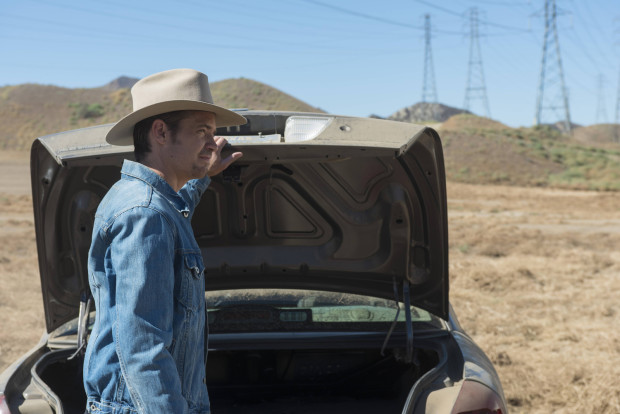 Raylan is, of course, doing Raylan—which means crashing into, then dragging, a Mexican Federale back into his jurisdiction in order to get him to testify about a murder he’s sure Boyd committed. Then he’s back at the Marshals’ office with his boss, Deputy U.S. Marshal Rachel Brooks (Erica Tazel), and ADA David Vasquez (Rick Gomez); the three are building a RICO case against little old Boyd (seriously, the RICO Act is usually more of an organized crime bludgeon). Brooks and Vasquez implore Raylan to do things by the book, or at least near it, but he remains noncommittal.

Boyd is also pondering his home life now that he’s back with his newly paroled fiancée, Ava (Joelle Carter). He putters around her farmhouse, sanding things (I don’t know anything about home repairs). He asks her to join him in having a beer, and she demurs because it’s morning. Then she sits down to a mug of vodka.

Something’s rotten in the house of Crowder; Boyd doesn’t trust Ava, and Ava’s paranoid because she’s informing on Boyd. That’s what her release from prison hinges on—she must bring the Marshals’ office, a/k/a Raylan, something with which to convict Boyd. So Ava’s anxious and Boyd’s anxious, but they remain affianced. 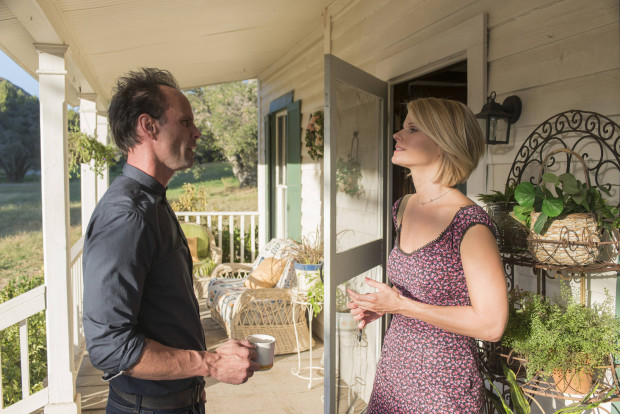 A shady stranger (Garrett Dillahunt) shows up at the Givens’ place with a cash offer on Raylan’s home. Raylan tells the stranger that there might be some people who are impressed with a suitcase full of cash, but he’s not one of them. So the stranger leaves, but we get the distinct impression it’s not the last we’ll see of him.

I spoke too soon about the Crowes—Dewey (Damon Herriman) has just been released from prison on a technicality for his Kentucky stuff. But Raylan’s right there to intone the episode’s title, calling Dewey a pawn in “fate’s right hand.” He tries to intimidate him into turning state’s evidence, but Dewey knows a little something about his rights these days, and skips off to board the bus back to town.

Boyd quotes Thomas Jefferson while doing some recon work at a bank, so we see he’s right back where he started. Back at the bar, he’s unhappy to see Dewey, who’s there to beg back into the gang. Boyd is skeptical, but assigns Dewey a task anyway—to  lead Raylan and his partner Tim Gutterson (Jacob Pitts) on a wild goose chase. Dewey has served Boyd’s purpose (a distraction from the bank robbery in progress), but he’s heartbroken at the knowledge that he hasn’t been entrusted with a real responsibility.

The heist goes off without a hitch, until Boyd and his gang see that all they’ve gotten for their trouble is a ledger and some deeds. But Boyd’s not licked yet.

Raylan’s mad at Boyd and Dewey, so he goes to yell at Ava about her lack of intelligence (both her own and the evidence kind) and threaten her with even more prison time if she doesn’t produce something soon. Poor Ava’s stuck between a crook and a lawman; it’s no wonder she’s daydrinking. 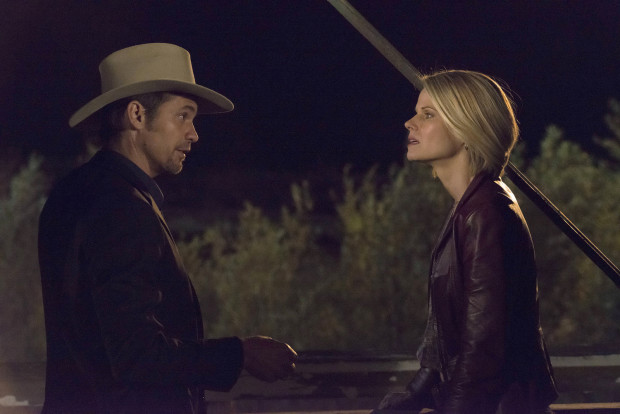 Still fuming, Raylan goes to visit his old boss and mentor, Art (Nick Searcy). Raylan can’t decide whether to talk about the future (his family life in Florida) or the present (the case against Boyd), which is really the past. Art remains characteristically unsympathetic, for the most part. But then he flat out asks Raylan how he sees things playing out, and Raylan can really only picture an ending that leaves him standing. So Art asks the question that will be on everyone’s minds: “What if it goes the other way?”

Dewey confronts Boyd about the high-speed car chase he unwittingly entered into, but that devolves into reminiscing about their old skinhead days. Boyd doesn’t really want to look back, though, even when he instructs Dewey to look at a picture of his [Boyd’s] ancestors. And in a scene right out of Steinbeck, Dewey gazes at Boyd’s past just as Boyd ends his future.

Next week: the shady stranger returns! And Ava’s still trying to make good on her promise to the feds. And Raylan and Boyd are still locked in a dance from which only one of them will come out alive. Seriously—welcome back, “Justified”!

Though Garrett Dillahunt makes a great wild-eyed bad guy, he’s more buttoned-down this time. Well, except for the tumbleweed beard.

Raylan and Boyd don’t get a lot of face time with each other this episode but man, oh man, is a storm a-coming.

What did you think of the “Justified” premiere? Were you shocked by Dewey’s demise? And is a suitcase full of cash an offer you CAN refuse? Tell us in the comments!