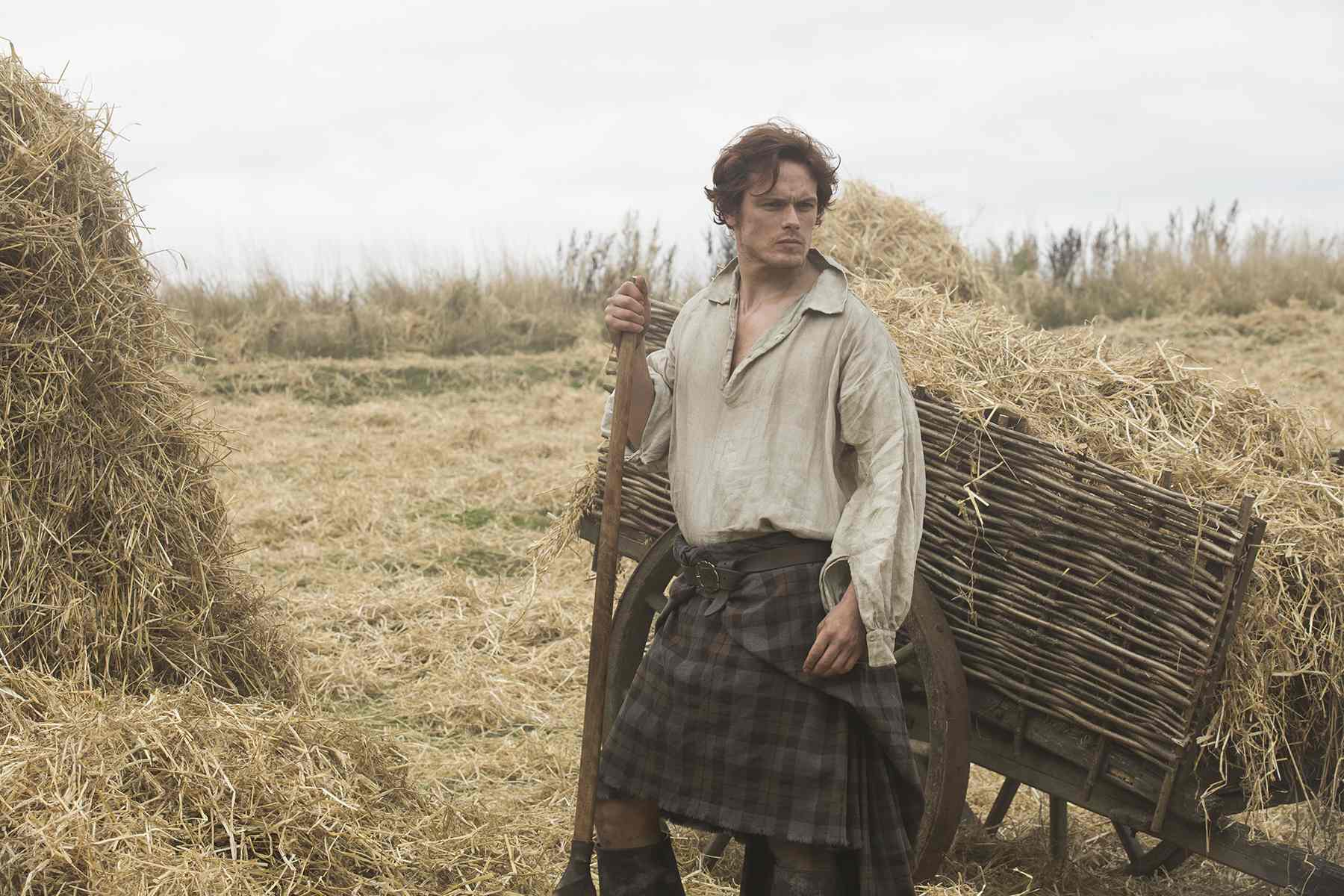 While “Outlander” won’t return with the second half of Season One on Starz until April 4, 2015, I recently had the opportunity to sit down and chat with Sam Heughan, who plays Jamie Fraser opposite Caitriona Balfe’s Claire Randall.

The runaway hit series is based on the popular novels written by Diana Gabaldon. The first season covers the first book in the series of the same name. When asked if she could separate the actors from their characters, Gabaldon responded, “Oh, well, Caitriona and Claire, I’ve always been able to keep fairly separate. He (Sam Heughan) kind of flickers in and out for me.”

Read on for Heughan’s thoughts on steamy love scenes, on-set pranks, and a fitness challenge he started.

Connie Wang: For fans who actually haven’t read the series, what can they expect in the second half of Season One?

Sam Heughan: “For fans who haven’t read the book? What are they doing?! They should read them! Wow!”

Or what can you reveal, I should say.

“It starts off very, very strong. Honestly, it gets more and more intense and more and more dark. We start with Jamie’s point of view, so you see what he went through to rescue Claire from Black Jack. Their relationship is ultimately tested and challenged throughout the whole of next several episodes. It really goes to some very dark places. They come to head a lot of the time. They’re constantly challenging each other. The sort of wonderful, romantic relationship we built up in Episode 7 … they’re fighting to get back to that, but there are different challenges there that arise.”

You two seem to have very good camaraderie.

“We constantly bicker. We don’t get along at all. No, she’s wonderful. She’s a great girl.”

Who’s the prankster on set?

“Umm, we don’t really have time to prank around? It’s a very busy schedule, but having said that, the Highlander boys are so fun. Duncan Lacroix, who plays Murtagh, is a real character. Everyone enjoys it when he comes to set. We want to hear what he’s been up to now because he’s pretty crazy. He’s a lovely man. Yeah, we’re always laughing and joking around. Graham MacTavish, too, who plays Dougal, is just a wonderful character. We go out a lot together as a group, you know. We go to the pub or to dinner and things. It’s wonderful.”

When do you start filming Season 2?

“We start around May … Spring.”

Would you say this is the most challenging role of yours to date?

“Yes, yes … and no. Every role has its own challenges. The last episodes of the show were probably the most intense, emotional, physical things I’ve ever filmed. Every job is different. Every play, every TV job has it own challenges.”

[During the “Outlander” panel at the Television Critics Association winter press tour, Heughan was asked about the extensive prosthetic scarring he sports on his back as Jamie Fraser.]

“It’s remarkable. It really is. We get it made in London. We have, like, a full body cast. Then, on our shooting day, it probably takes about two hours maybe, an hour and a half. It did take upward of about three hours. We’ve got a fantastic makeup team, and they have got it down pretty quickly. And it does, it moves with the body. We do spend a lot of time rolling around on the floor, don’t we, Caitriona? So it does get a little damaged, but so far, you know, it’s held up well. And I think they’ve done a really fantastic job. And in the second part of the show, Jamie goes through quite a lot of injuries, especially the last couple of episodes. And we have almost full body prosthetics. It’s pretty crazy. And I think it’s going to look remarkable and be pretty shocking, as well.”

A friend and fellow “Outlander” fan told me about a fitness challenge you started. (Heughan’s face lights up at the mention of this.)

Would you like to talk more about it and how fans can participate?

“I would love to! It’s called My Peak Fitness. It’s a collaboration with Fight Camp Glasgow, which is a personal training company in Glasgow, Bear Strength Clothing, which is a clothing company in Wales, and Leukaemia & Lymphoma Research, the charity for blood cancer.

“Basically, I wanted to share my love for the outdoors. Living and working in Scotland, I love climbing, the walking … I wanted something everyone could basically get involved and do, no matter where you are in the world, and raise money for charity and also create a community, as well. So we created My Peak Fitness Challenge. Basically, you sign up and you choose your goal – whether that’s a walk in the park, or taking the stairs every day at work, or climbing a mountain, or cycling down the river – whatever, wherever you are, you pick your goal.

“We’re posting workout videos, but they’re all scalable, so no matter what your level of fitness, you’ll be able to do it, you’ll just scale it up or down. We’re doing health advice and creating some sort of community on Twitter, Facebook and hopefully raise money for charity, as well.”

“If you sign up, you get a t-shirt and access to YouTube videos. It’s very organic. We’re trying to work with the charity about the ways we can encourage people just to be more active and get outdoors, to support each other. They’ve embraced it so far, the fans. They’ve been really great. We’re releasing some more things, as well. I want do some little surprises, yeah.

“On March 14 – 15, that’s the Challenge weekend. That’s where you sort of complete your challenge, share your results with everyone else. You post (a pic) at the top of the mountain, on your bicycle, top of the stairs. It should be fun!”

Will it be a year-round thing or end in March?

“Well, we’ll see! What we would like to do is maybe after you’ve reached My Peak Challenge is to try to continue it some other way. We might do some challenges in the future. I’ve got a couple of ideas for group challenges where people can get together in the UK or America, whether it’s climbing a mountain in Edinburgh, or in Los Angeles, it would be like a walk up Runyon Canyon together. It’s a nice way for people to get together and support each other.”

Are you enjoying the warm weather out here?

“I can’t wait to get out there! It’s beautiful.”

Any other projects you’re currently working on?

“I’m actually shooting a movie here (in Los Angeles) in February. Independent movie called, “When the Starlight Ends” written and directed by Adam Sigal. It’s a lovely little modern movie about the end of a relationship – it’s a beautiful play, sort of soulful piece. I’m quite excited.”

Are you playing an American or a Scot?

Have you worked on your American accent?

“Yeah, I kind of need to do some work on that.”

“Wow! If you go on my Twitter, you’ll see I’m a huge fan of We Were Promised Jetpacks. Saw them in San Francisco a couple months ago, just before Christmas. They’re a Scotch band and they’re terrific. Favorite song? (He pauses and I suggest perhaps the “Outlander” theme song might be his favorite?) I do love Scottish music, so yeah, anything traditional.”

(He chuckles.) “Dragonfly in Amber!”

Book 2 has been greenlit by Starz and will begin filming in the spring. Starz will show a full minute of the next episode in the series in front of the “Black Sails” premiere on January 24.

Are you a ‘Heughligan’? What would you like to see happen in the second half of season one of “Outlander”? Leave comments below!