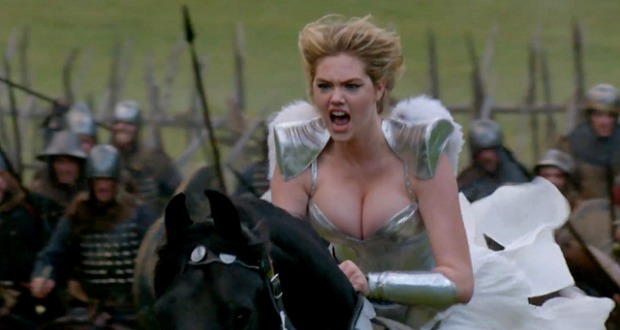 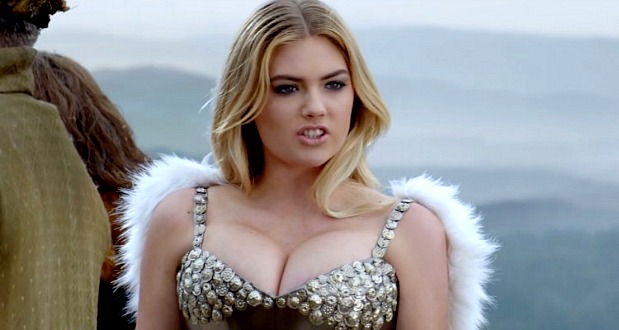 When I first saw the commercial for “Game of War: Fire Age,” I couldn’t even wrap my head around what was happening, because the girl’s ginormous bazoombas were so distracting. Like, really distracting. It takes you a second to realize that this is a commercial for a game.

The girl is American model and actress Kate Upton, by the way, who I guess is known for her cleavage, since she was the cover model for the Sports Illustrated Swimsuit Issue in 2012 and 2013 and has appeared in movies like last year’s “The Other Woman.” In which she played … the other woman. Or at least one of them.

I’ll qualify this post by noting that I’m not a gamer and know nothing about “Game of War: Fire Age,” other than what I’ve read over here. I mean, it seems like a cool game of strategy (a modern cyber-version of the old Stratego board game we used to play as kids).

As I understand it, “Game of War” is a mobile app game where you join millions of other players around the world in real time to form alliances, make friends, build empires, craft weapons, train armies, and so on and so forth. It sounds fun. And best of all, it’s free!

But I’m curious how female gamers feel about the sexed-up girl in the commercial. She seems to be in charge, so there’s that (you go, sexed-up girl!). But I’m worried for her. There’s a good possibility of some real injuries as she’s bouncing around on that horse. She could hurt herself!

But are girls with ginormous bazoombas typical in the gaming world? Does it bug you, or don’t you care? Sound off in the comments below.