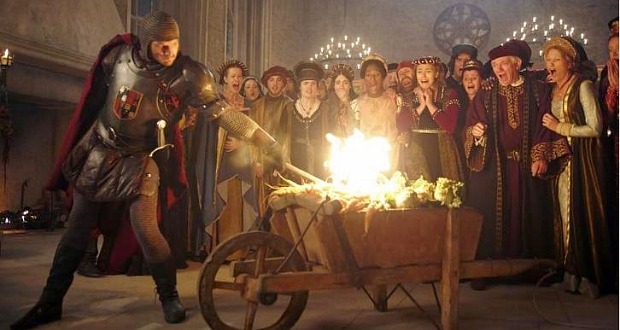 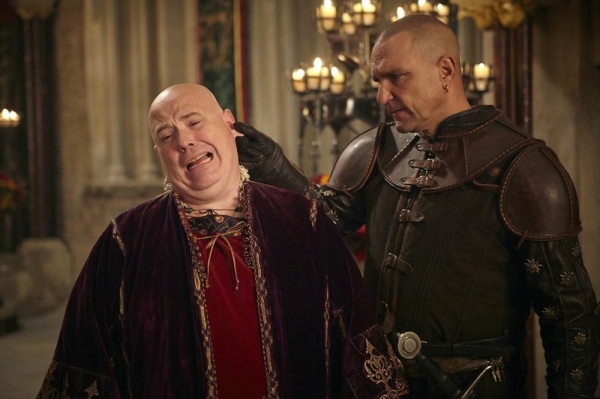 And so we return to the world of “Galavant,” where Sid poses as a knight, the group gets kidnapped by pirates, and Gareth curses far more than any ABC show could ever need.

Upon needing a place to rest for the night, our trio runs into Sid’s (Luke Youngblood) village, where the squire has made up stories as to his Galavant-like heroics. To stop his parents from finding out, his friends play along, Galavant (Joshua Sasse) reluctantly and Isabella (Karen David) with joy.

On the other side of the country, King Richard (Timothy Omundson) has decided that he needs to amuse the people he captured and plans a very ill-timed ball. Everything he does is to win the affection of Madelena (Mallory Jansen), who continues to be utterly bored with his antics and wanting only to spend time with her sexy jester – and who can blame him?

We have amusing musical numbers that look inspired by “Fiddler on the Roof” – fun and silly, though I long for singers of slightly better training than what “Galavant” keeps throwing at me. Galavant begins to realize that being a squire might not be all he imagines it to be, and that he could treat Sid a bit better than he is.

Of course, in the opening of the episode that immediately follows, the trio is back to arguing again, over everything – how Galavant eats the raisins from the trail mix, how Isabella snores, and how Sid … does his job pretty well, actually, except for when he drops a bucket full of water back into the river. (Poor Sid. Always getting the short end of the stick.)

They’re so busy arguing that they don’t notice when a group of pirate bandits sneaks up and takes them captive. Hugh Bonneville of “Downton Abbey” fame makes a guest appearance as Peter Pillager, the pirate king – which was timed with the best musical number of the show, a pirate shanty that I’ve been humming since hearing.

After sitting around and waiting for something to happen, the group gets up and decides to work together, forgiving each other for their flaws – and, in the case of Galavant, actively standing up on behalf of Isabella. Who then nearly tells Galavant her secret: that she’s working for the king. But Galavant’s not listening – though he promises to become better at that, as well – and she changes her mind on sharing that secret.

While the trio is learning to work together, Richard is continuing to try to woo Isabella – who learned, at the end of his ill-planned ball, that she’s been sleeping with her sexy jester (Ben Presley). Richard goes to the Jester and convinces the Jester to teach him to be funny to woo Madelena. After a fantastic number where the Jester utterly fails to get Richard to understand the basics of comedy, the king puts on an absolute fail of a comedic performance, at least until he slaps Gareth in the face with a pie.

Madelena laughs, and everybody seems to get what they wanted – except for the Jester, who now feels guilty about their relationship after befriending the king, so Madelena sends him to the dungeons. The scary ones. With the mice.

When Madelena is at her most evil, the show is at its best. She and princess “I trained in monologues, not poetry” Isabella continue to be the best parts of the show, though watching Galavant find a heart and begin to learn how to work with Isabella and Sid is a lot of fun and mildly adorable.

Those adorable moments are when I think the show is wonderful. And there are moments when I sit and stare and wonder how, exactly, that got into the final script.

While I love King Richard, who continues to be the best acted on the show and the most interesting of the male characters, I could do without the raunchier jokes and foul language. It’s not that I dislike them on a general scale – but compared to the rest of the show, it seems out of place.

I don’t mind the Jester and Madelena, or the dramatic shots of Galavant coming out of a bathtub, but the “kick the eunuch” game and the constant cursing from Gareth (Vinnie Jones) is a bit too much for me. It’s not funny, it’s not clever; it’s going for a sort of obvious shock humor that doesn’t fit the rest of the show.

But hey, in the last few shots of the episode, they gave a subtle shout-out to their Monty Python roots, and I can appreciate that.

What do you think? Is Gareth’s brand of humor too much? And when will Galavant realize that he’s falling for Isabella? Sound off in the comments below!