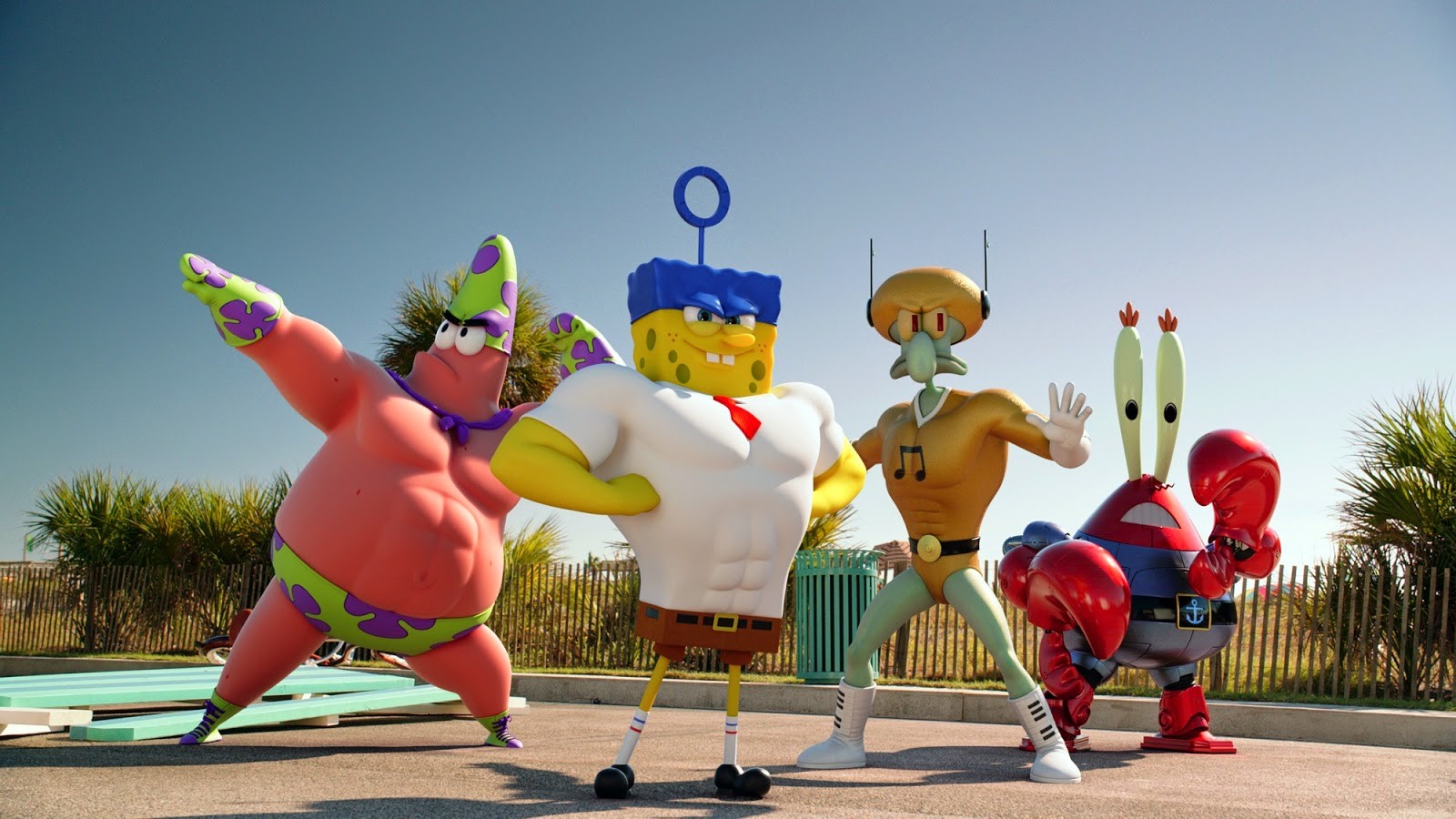 New on the big screen in February is everyone’s favorite sponge (hint: he lives in a pineapple under the sea), Kevin Costner in an inspirational sports movie from Disney, and Mila Kunis as an interplanetary leader. Here’s a sneak peek at what’s new in theaters and on DVD and Blu-ray this month. Note that release dates are subject to change.

In a time of enchantments when legends and magic collide, the sole remaining warrior of a mystical order (Oscar winner Jeff Bridges, putting his gnarly voice to good use) travels to find a prophesized hero born with incredible powers, the last Seventh Son (Ben Barnes). Torn from his quiet life as a farmhand, the unlikely hero embarks on a daring adventure with his battle-worn mentor to vanquish a dark queen (Julianne Moore) and her army of supernatural assassins. Based on the book “The Spook’s Apprentice” by Joseph Delaney.

Under the artistic direction of Ballet Master in Chief Peter Martins, New York City Ballet boasts more than 90 elite dancers and a repertory of works by the best choreographers. When 25-year-old NYCB dancer Justin Peck begins to emerge as a promising young choreographer, he’s commissioned to create a new ballet for the Company’s 2013 Winter Season. The film follows Peck as he collaborates with musicians, lighting designers, costume designers and dancers to create Paz de la Jolla, NYCB’s 422nd new ballet. A fascinating look behind the curtain of the ballet world.

THE SPONGEBOB MOVIE: SPONGE OUT OF WATER

Our favorite sponge (voiced by Tom Kenny) goes on a quest to discover a stolen recipe that takes him to our world, where he tangles with a pirate named Burger-Beard (Antonio Banderas), who’s searching for the final page of a magical book that makes any evil plan he writes in it come true. In this case, it happens to be the Krabby Patty secret formula. When the formula goes missing and Bikini Bottom is in danger, SpongeBob, Patrick (Bill Fagerbakke) and the gang journey to the surface to retrieve the recipe and save their city. They get to be superheroes along the way.

Jupiter Jones (Mila Kunis) was born under a night sky, with signs predicting a great destiny. Now grown, Jupiter dreams of the stars, but wakes up to the cold reality of a job cleaning other people’s houses and an endless run of bad breaks. Only when Caine (Channing Tatum), a genetically engineered ex-military hunter, arrives on Earth to track her down does Jupiter begin to see the truth. Her genetic signature marks her as next in line for an extraordinary inheritance that could alter the balance of the cosmos. This original sci-fi — and epic! — adventure is written, produced and directed by Lana and Andy Wachowski.

Based on the acclaimed comic book and directed by Matthew Vaughn (“X-Men: First Class”), this movie tells the story of a secret spy organization that recruits an unrefined but promising street kid into the agency’s competitive training program just as a global threat emerges from a twisted tech genius. Samuel L. Jackson, Michael Caine, Colin Firth and Taron Egerton star in this action-thriller, which features a new track from Iggy Azalea and Ellie Goulding.

Bianca (Mae Whitman) is a high school senior whose world is shattered when she learns the student body knows her as “The DUFF” (Designated Ugly Fat Friend) to her prettier, more popular friends (Skyler Samuels and Bianca Santos). Despite words of caution from her favorite teacher (Ken Jeong), she puts aside the potential distraction of her crush, Toby (Nick Eversman), and enlists Wesley (Robbie Amell), a slick but charming jock, to help reinvent herself. Bianca must find the confidence to overthrow the school’s ruthless label maker Madison (Bella Thorne) and remind everyone that we are all someone’s DUFF.

Inspired by the 1987 true story, this movie follows novice runners from the economically challenged town of McFarland in California’s farm-rich Central Valley, as they give their all to build a cross-country team under the direction of Coach Jim White (Kevin Costner), a newcomer to their predominantly Latino high school. With grit and determination, the unlikely band of runners eventually overcome the odds to forge not only a championship cross-country team, but an enduring legacy as well. Along the way, Coach White realizes that his family finally found a place to call home. A sweet and similar follow-up to Disney’s “Million Dollar Arm.”

THUNDER AND THE HOUSE OF MAGIC

The animated film from Shout Factory! is directed by Ben Stassen and Jeremy Degruson. The story follows a small orange cat named Thunder, who is abandoned by his owners. While wandering the neighborhood, he stumbles into a strange house owned by an old magician and inhabited by a dazzling array of automatons and gizmos. This movie is unique, inventive and fun, but because of a few scary scenes, including Thunder getting chased by a dog, nearly hit by cars and falling out of a tree, I recommend it for kids 7 and older.

This animated adventure from Studio Ghibli is directed by Goro Miyazaki and features the voices of Timothy Dalton, Willem Dafoe, Cheech Marin and Mariska Hargitay. Based on the classic fantasy book series by Ursula K. Le Guin, the story is set in a mythical world filled with magic and bewitchment. In the land of Earthsea, crops are dwindling, dragons have reappeared, and humanity is giving way to chaos. Journey with Lord Archmage Sparrowhawk, a master wizard, and Arren, a troubled young prince, on a tale of redemption and self-discovery as they search for the force behind the mysterious imbalance that threatens to destroy their world. Available for the first time on Disney Blu-ray.

Now on Disney Blu-ray for the first time, this film from Studio Ghibli and director Isao Takahata explores the clash between modern civilization and the natural world. The raccoons of the Tama Hills are being forced from their homes by the development of houses and shopping malls. When it becomes harder to find food and shelter, they decide to fight back, practicing the ancient art of transformation to appear as humans. In often hilarious ways, the raccoons use their powers to try to scare off the advance of civilization, but will it be enough? Or will the raccoons learn how to live in balance with the modern world?

This DVD is excellent for helping little ones welcome new babies into the family. And four-year-old Daniel Tiger invites young viewers directly into his world, giving them a kid’s eye view of his life and making them feel like one of his neighbors. Episodes include “The Tiger Family Grows,” “Daniel Learns About Being a Big Brother,” “The Baby is Here (Special Double Episode),” “Baby Margaret Comes Home: Time for Daniel,” “There’s Time for Daniel, and Margaret Too,” “Playtime is Different,” and “The Playground is Different with Baby.”

After the Bears catch the Feeling Flu, all their usual feelings are switched, until Harmony leads them to a cure. Then it’s Share Bear to the rescue when twin sisters need help with their friendship issues, and when Funshine is overcome by fears, Grumpy inspires him by bringing happiness to a boy in need. These sweet tales encourage little ones to open their heart and journey to Care-a-Lot for a celebration of caring and sharing.