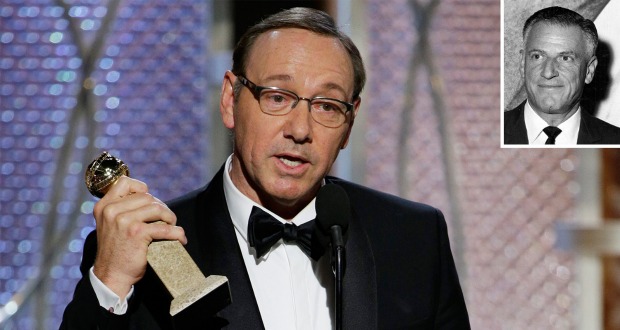 At this year’s Golden Globes, Kevin Spacey earned an award for Best Performance by an Actor in a Television Series – Drama for his role in Netflix’ drama “House of Cards.” During his acceptance speech, he shared a poignant moment he had with friend and producer/director Stanley Kramer.

His films earned 10 Academy Awards. But many watching Spacey share his memories of Kramer wanted to know more about the man who had such an impact on him.

I had the opportunity to talk with Stanley’s widow, Karen Sharpe Kramer, about Stanley and his amazing career, what Kevin Spacey’s comments meant to her, and about the award that honors her husband’s legacy. An award-winning actress in her own right, Karen was married to Stanley from 1966 until his death in 2001. She maintains the Stanley Kramer Library, and also established the Stanley Kramer Award at the Producer’s Guild and the Stanley Kramer Fellowship Award in Directing through the University of California, Los Angeles.

This Saturday, January 24, at the Producer’s Guild Awards, she will give this year’s Stanley Kramer Award to HBO’s television motion picture “The Normal Heart,” which stars Mark Ruffalo, Matt Bomer, Julia Roberts and Jim Parsons and focuses on the AIDS crisis.

Kevin Spacey at the Golden Globes: (Excerpt) “I said to him, ‘The film you made, the subjects you tackled, the performances you got out of some of the greatest actors that have ever walked the face of the earth, the Oscars you won, your films will stand the test of time and will influence filmmaker for all time…’ And he said as clearly to me as anything he’d ever said: ‘Thank you so much for saying that. That means so much so me. I just wish my films had been better.'”

Lisa Iannucci: How did you feel about Kevin’s comments about Stanley?

Karen Sharpe Kramer: “It was an awesome moment. I don’t think Kevin knew I was going to be at the Golden Globes, but I go every year. I remember how much it meant to me when I won. Now those people who admire the work that Kevin has done are now looking up Stanley Kramer and want to know more about him.”

Why do you think Stanley told Kevin that he wished he’d made better movies?

“When you aspire in your work, you also have to make compromises. Maybe an actor can’t say your favorite line, or the sun went down on the shoot and you didn’t get the shot you really wanted. Whatever you do today, you look back on five years later and think, “I could’ve done such-and-such.” And, as you grow, you’re evolving and want to know more. Stanley aspired to so much, and he was never completely happy with his films. It’s a good lesson. We are aspiring to be better every day.

“Sadly, some of these issues that he presented to us we’re still grappling with today. There’s still anti-Semitism and everything that’s going on with the African Americans and the police and, of course, genocide. When Stanley made “Judgment at Nuremberg” 14 years after the war (1961), it wasn’t a war movie, it was about the judicial system and the men who stood for something.”

Stanley’s movies were very deep and serious. What was he like away from the cameras?

“Stanley Kramer was a family man first and a filmmaker second. When I married him in 1966, he was preparing ‘Guess Who’s Coming to Dinner?’ and was home for dinner at six and never talked about film. He was a very devoted father and very funny and had great integrity and honesty. If he said he was going to do something, he did it. You knew that everything is always going to be alright, because Stanley was here.

“The New York Times critic Bosley Crowther once said to him that when the critics get together they discussed filmmakers. He told Stanley they thought he was the most influential filmmaker of the 20th century, but they agreed he could not make a comedy. Stanley had to prove them wrong, so he made “It’s a Mad, Mad, Mad, Mad World” (1963), and it remains a favorite. In 2013, we celebrated the movie’s 50th anniversary at Stanley’s Centennial celebration.”

Why did “The Normal Heart”  receive this year’s Producer’s Award?

“The first year of the Producer’s Guild Award, there were no social issue films to give it to. You have to be courageous and comfortable to make films with a social theme. Little by little, films started popping up and we gave awards to ‘I Am Sam’ (mentally challenged), ‘Antwone Fisher’ (child abuse), ‘Hotel Rwanda’ (genocide), ‘Milk’ (gay rights), ‘Goodnight, and Good Luck’ (media responsibility), and ‘An Inconvenient Truth’ (global warming).

‘The Normal Heart’ was beautifully made. It never got its due for the Emmys, and it has a great message. I think what’s important is the need to fight for a cause and go to the mat for something that’s really important. This award sheds lights on the issue of AIDS and was produced by Plan B (Brad Pitt’s company) and Ryan Murphy (creator of ‘Glee’).”

There are so many more documentaries today that focus on social issues. Do you think that film festivals have helped with that?

“Absolutely. There are so many films that don’t get seen unless it’s at film festival, but unfortunately, the producers and directors have to use their own money. More than ever, the world is in chaos and overwhelmed by it, and it’s a very rich time for filmmakers with so many subjects they can cover. It’s a field day for the independent producer, and Stanley put them on the map.

“Charlie Chaplin and Mary Pickford started independent film making, but it dried up in the 1940s. Stanley knew the stories he wanted to tell. However, the conglomerates weren’t going to subsidize a non-popular topic, so he had to raise his own money. Columbia approached him to make more films, but he didn’t want to do it. However, his partners had children and wanted to go where their salaries were paid each week. They went and made good films, but when he left and became a producer/director on his own, he made his greatest list of films, including ‘The Defiant Ones,’ ‘Inherit the Wind’ and more. In 1971, he even made a movie on animal rights, ‘Bless the Beasts and Children.’ Today his daughter, Catherine, is very involved in social issues, too.”

Stanley had a rough childhood; do you think that is what motivated him to create documentaries?

“Yes, I think being born in Hell’s Kitchen, the armpit of America and a dangerous community, had an impact. You had three choices – become a prize fighter, become a priest to survive, or go to prison. Stanley was born to a woman whose husband left her the first year. He was raised by a single mother, which was a big stigma in 1913. He went to NYU and fell in love with writing. He entered a New York Times contest when he was 13 and won the prize for the best writer.

“His mentor was Eleanor Roosevelt. He wrote to her because he was impressed with the Daughters of the Revolution. She was impressed and wrote him back and became his mentor. He had an understanding of social events and said that this was going to be his niche. When a story came along or something he didn’t understand, he wanted to make a movie about it and understand it better. He had one hell of a mother and he became one hell of a great father. I wish he lived longer making films today. He would be the godfather of social issues and film.”

How would you sum up Stanley Kramer?

“You can sum him up with a line that Spencer Tracy’s character Judge Dan Haywood said in ‘Judgment at Nuremberg’: ‘Let it now be noted in our decision here that this is what we stand for: justice, truth … and the value of a single human being!’ That was Stanley Kramer.”