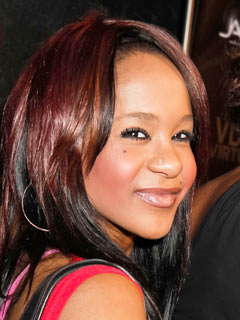 UPDATE, Feb. 1, 2015: TMZ is reporting that Bobbi Kristina has “significantly diminished” brain function and doctors have told her family it does not look good … this according to sources connected with the family.

She was placed in a medically-induced coma last night, and she’s currently on a ventilator. Tests indicate that her brain function is alarmingly low. Bobbi Kristina’s dad, Bobby Brown, is at her bedside.

Jan. 31, 2015: Whitney Houston and Bobby Brown’s daughter, Bobbi Kristina Brown, was found unconscious in a bathtub in her home this morning. TMZ is reporting that she was taken to a hospital, where she was revived and is now breathing.

According to police in Roswell, Georgia, Bobbi’s husband Nick Gordon and a friend found her in the tub, at which time the friend immediately started CPR on her until paramedics and police arrived.

Police took over life-saving measures on the scene, and she was transported by ambulance to a hospital, where doctors stabilized her breathing.

This is just so sad on so many levels. It’s unclear at this time what happened, but remember that her mom Whitney died in a bathtub at the Beverly Hilton on Feb. 11, 2012 – nearly three years to the day.

Love and prayers to Bobbi and her family.