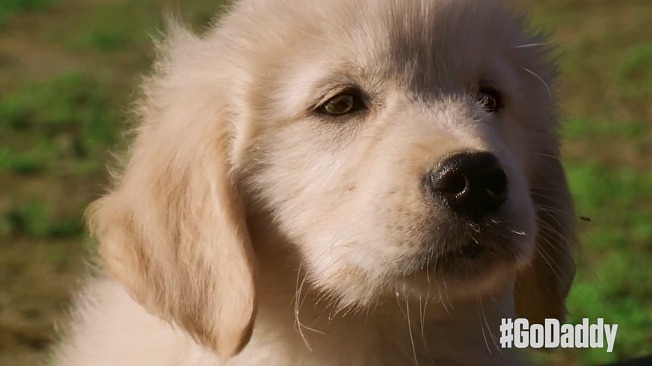 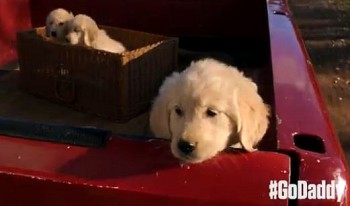 UPDATE 1/27/15, 8 pm: GoDaddy CEO Blake Irving has apologized and is pulling the ad (which is now unavailable to view at the bottom of this post).

“At the end of the day, our purpose at GoDaddy is to help small businesses around the world build a successful online presence,” said Irving. “We hoped our ad would increase awareness of that cause. However, we underestimated the emotional response. And we heard that loud and clear.”

Thank you @animalrescuers for the candid feedback. What should have been a fun and funny ad clearly missed the mark and we will not air it.

Power of the people!

So this year, they’re taking a different tact with their Super Bowl commercial, but they’re totally barking up the wrong tree. To start, it features a puppy being accidentally thrown out of the back of a pick-up truck. Bad Idea #1. Then the poor puppy makes its way back home through dangerous traffic and nasty weather. Bad Idea #2.

But instead of open arms, when the pooch gets back home, it’s revealed that he’ll now be sold online — through a website built on GoDaddy, of course. Bad Idea #3.

Look, I guess this commercial is meant to be satirical and poke fun at puppies — Bad Idea #4 — but it fails miserably. Instead of the warm feeling surrounding puppies that Budweiser has done so well, GoDaddy is encouraging private breeding and puppy mills — Bad Idea #5 — while shelter animals who are patiently waiting for their forever homes are euthanized.

GoDaddy is also encouraging people to buy puppies online, and who knows where those puppies might end up? A fighting ring, an animal abuser or someone who can’t adequately care for the animal. Bad Idea #6.

In short, this clueless GoDaddy commercial totally misses the mark. To portray animal rights in a comical way is no laughing matter.

If this GoDaddy commercial bothers you, hop over to Change.org and sign the petition to keep it from further seeing the light of day.