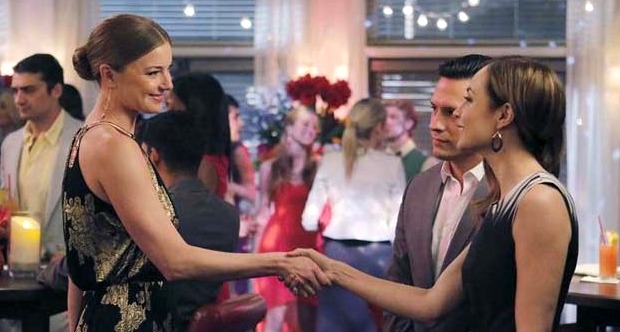 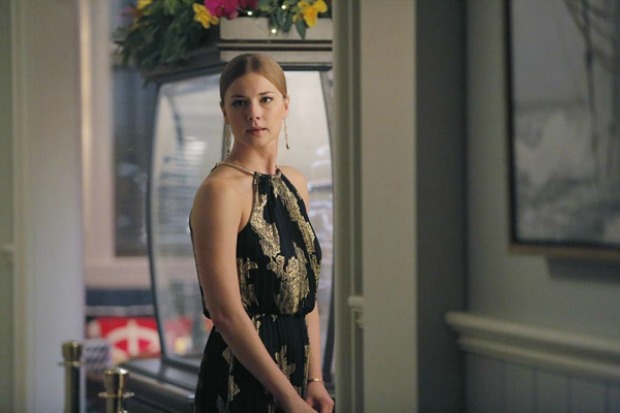 After being on hiatus for a week (unintentionally), I’m back to recap “Revenge,” and I can’t believe what happened! Daniel was killed off. We knew someone was going to die, but I was hoping it wasn’t a main character. Oh Daniel … more later.

Nolan got back to good graces with nut-ball Louise. He worked hard to get her back, and it paid off. I guess the writers have something in store for us with her still hanging around. We know it won’t be good, whatever it is. Too bad she wasn’t the one killed off.

David has a talk with Victoria and tells her he needs to deal with Malcolm Black. He gets a drug from an old friend he had in prison that could kill a person while making it look like a heart attack. Kate visits Victoria and asks about the photo of Emily she had sent her. Vicki (I hate that name – so fitting for Victoria) tells Kate she will expose her if she doesn’t leave her and David alone.

David, David, David … what did you think when he put the drug in Victoria’s wine? Were you hoping she would drink it? We knew she wouldn’t, didn’t we? I was impressed, though – they do have a weird relationship. Are they both being fake? I don’t even know.

Our “smarter than everyone else Emily” can sense that Kate is bad. Nolan is doubtful, but he should know Emily is usually right, and I was hoping she would get “rid” of Kate once and for all. I guess our wish came true.

Daniel and Margaux – I felt bad for Daniel that Margaux didn’t want him back, and accused him of being like his dad. That’s the last thing he wanted to hear. He did  love Margaux and wanted to be a dad and have a life with her. Even Victoria believed that they loved each other. She wanted the baby to have a father. That’s a good one, coming from her.

I did love the speech that Daniel gave to Victoria. He did it in such a calm way, and told her that their family (the Graysons) were a bunch of cowards … even defending Emily. It seemed that Victoria took notice of what he said to her. Little did she know it was the last time she would ever see him alive. Ugh.

Later on the beach, Daniel held a letter in his hand. A letter he had written to Conrad telling him he was going to do the right thing (when he was going to testify for Sara). But in a flashback, Conrad showed up at the courthouse and convinced Daniel to save the family legacy and not the lowlife girl. Daniel, to his regret, took Conrad’s advice. Daniel regretted the bad things in his life. We knew that he always really did have a good side, but was suppressed by his devious and power hungry parents.

I was so happy when Margaux called and told him to come home – that she loved him. He smiled and was finally going to be in a happy relationship with a positive future ahead – enter Kate. Boo hoo.

As planned, Kate meets Emily at the mansion. Emily pinned her against the wall and found a gun on her. They had quite the fight scene, which Daniel happened to hear because he was at the beach. As Emily lays on the floor injured, Kate picks up the gun to shoot her. Daniel jumps in front of Emily  and shields her. Emily tells him to run, but he doesn’t and pays the price. He is shot.

Jack arrives and kills Kate. Daniel lies dying on Emily’s lap. “Why didn’t you run like I told you,” Emily says in a distraught voice. She was clearly upset, as was Jack. She tells him he’s going to be okay and he (knowing he was going to die) says, “You aren’t still lying to me, are you?” Emily tells him it wasn’t always a lie, she and him. It was a nice to see them in a good place before he died (as silly as that sounds). Emily was truly upset, knowing Daniel was a victim of his family – and of her actions.

I will miss Daniel, but Josh Bowman wanted to be killed off. He has said in interviews that his character flip-flops too much, and that he would love it if he could just be really bad. LOL – I guess that isn’t happening. I do find comfort knowing that he and Emily Van Camp are still a couple and who knows, maybe in real life they will tie the knot someday. That would be a happy ending.

What did you think about Daniel getting killed off? Are you ready for the mid-season finale of “Revenge”? Will David really try and kill Victoria? Sound off in the comments below!