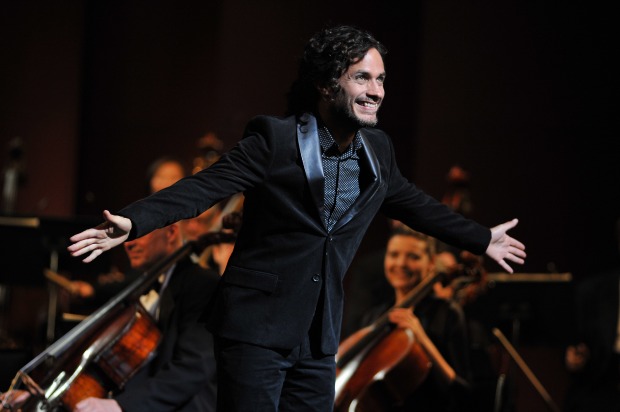 Amazon celebrated the premiere of their  new web series “Mozart in the Jungle,” starring Gael García Bernal, with a splashy premiere last week at Alice Tully Hall. Jason Schwartzman and Roman Coppola – Hollywood royalty — created and wrote the new Amazon web series about the backstage secret debaucheries of the classical musicians of a fictional New York orchestra referred to as the Philharmonic. The show was also co-created by the Tony nominee Alex Timbers, and the first two episodes directed by Paul Weitz (“About a Boy,” “Little Fockers”).

Gael García Bernal plays superstar South American conductor Rodrigo D’Souza, who has both a rocker’s charisma and his outsized ego. Bernal plays the role for comedy and camp, but also some heart. Malcolm McDowell portrays the cranky maestro conductor who is not so happy about being replaced. Then there is the sluttish first cello (Saffron Burrows), and the ingénue oboist (Lola Kirke) working and drinking hard while trying to make it to first chair. (The current first chair, Debra Monk, fights her tooth and nail.) Bernadette Peters is the ditzy chairperson who tries to run the company but is clueless and besotted with the new young hip maestro. Meanwhile there’s plenty of sex, drugs and classical music.

The first two episodes were screened to a full audience, and an 80-piece orchestra performed several compositions, including Mahler’s 8th Symphony, which is part of a key story line. Before the screening Schwartzman said he couldn’t resist, and leaned over into the pit and hit the bass drum as hard as he could with a drumstick. “I’ve always wanted to do this,” he said.

Roman Coppola also told the audience, “Jason and I grew up in a family that’s always had a large appreciation of music. In fact, our great uncle Anton Coppola is still conducting at the age of 93 this year, today,” he said. “As much as we’re attracted to something that seems mysterious and unknown, it was when Jason discovered this wonderful memoir that it drew back the curtain and shed some light on the wonderful stories and something we were curious about and hope you are curious, as well.

The series is inspired by Blair Tindall’s memoir of the same name, and the author was there in a white dress that showed off her hennaed tattoo running along one arm. Her book is about her experiences as an oboist in New York in the 1980’s, she told me. “The show is trying to make people realize that classical musicians are not dull and that we have very interesting, kind of on-the-edge lives,” she said. “I wrote it in the style I thought would attract Hollywood people, but I never imagined I’d have this kind of dream team putting it together.”

Lola Kirke stars as Hailey – the author’s alter ego – a young oboist who hustles at jobs, including giving oboe lessons to spoiled Upper East Side teenagers, but what she dreams of is becoming a member of the Philharmonic. If Kirke looks familiar, it is because she looks a lot like her older sister Jemima Kirke, who appears in “Girls” (Kirke also has a role in David Fincher’s “Gone Girl.”)

Kirke told me about her character’s evolution. “You see Hailey become slightly more undone and more impassioned about what she’s doing and more driven. I think she starts like the ingénue and grows.” As for the wild partying, sex and drugs, “I guess it makes sense,” Kirke said. “I mean they’re people too and they’re artists, so artists are known for being degenerates, so it makes sense that classical musicians would be that way too.”

Gael García Bernal gets to show off his comic chops in a way I’ve never seen before. As Rodrigo, he steals every scene he’s in with his outrageous costumes and masses of curly hair. He and Bernadette Peters must share the same hairdresser. One of my favorite moments on the red carpet was when a man flew out behind me as I was interviewing Ms. Peters and began to plump up the curls on top of her head. She has masses.

Later, Bernal laughed when I mentioned that Rodrigo was a much different role than that of the imprisoned and tortured journalist he plays in Jon Stewart’s “Rosewater.” “Very different,” he laughed.

This is his first U.S. series, and he said the draw was both the story and shooting in New York. His character comes off as a womanizer and playboy but, Bernal said, “he’s really a tortured soul.”

The major challenge of the role was to stand up in front of real musicians and conduct them, he said. “It was overwhelming, the feeling of ‘this is ridiculous. What am I doing? I’m conducting people that do this for a living.’ They were very kind, but I knew I was conducting horribly,” he laughed.

“I had to study a lot the music. I had to learn it properly and try to follow it as well. It’s complicated,” he noted. “At the end of the season, there was a point where I felt I kind of got it a little bit, you know? Got more or less the feeling of it.” He added, “It’s just the game. You’re playing with them and they allow you to be director, so it’s a beautiful feeling.”

Also in on the red carpet was Joel Grey, who was there as Bernadette Peters’s guest, and Ralph Macchio (“The Karate Kid”), who starred in “The Outsiders,” Francis Ford Coppola’s 1983 film.

In the crowd I spied one of my favorite writers, Salman Rushdie, who told me he was there to support Saffron Burrows, one of his oldest friends. Rushdie said he watches a lot of television dramas. “’Game of Thrones’ is my wicked pleasure,” he told me. “I binge watch. Also ‘Homeland,’ season one, amazing, then enough.”

“Mozart in the Jungle” will be available to Amazon Prime customers on Dec. 23. Right now, you can catch the first two episodes of this addictive web series.