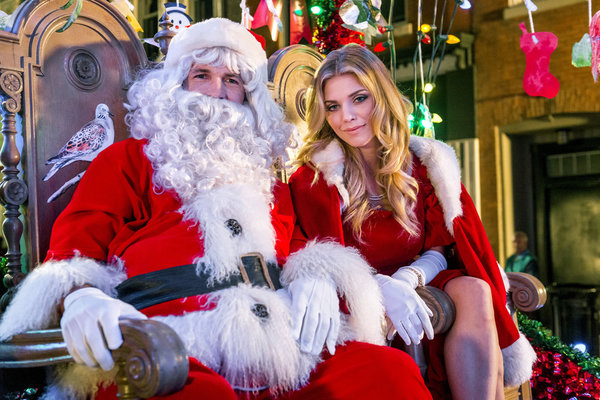 Hallmark Channel is premiering “The Christmas Parade” tonight at 8/7c! With AnnaLynne McCord and Drew Scott — yes, one of the twins from “Property Brothers.” I always thought he’d be great as an actor.

A network morning host, already short on Christmas spirit and then publicly humiliated, finds a way to reconnect with both real romance and the true spirit of the holiday by helping out with a small town’s Christmas festivities in “The Christmas Parade,” a Hallmark Channel Original Movie World Premiere Sunday, December 14 (8 p.m. ET/PT, 7C).

“During the holidays there is a genuine affection for those close to us and for our communities,” said Michelle Vicary, Executive Vice President of Programming, Crown Media Family Networks. “‘The Christmas Parade’ really connects with that feeling of community and we’re pleased to share this special holiday film with our viewers.”

Hailee Anderson (McCord), a well-known entertainment reporter for a network morning show, is humiliated when her oft absent investment banker fiancé, Jason (Scott) is revealed to be linked to a Beverly Hills socialite coming her way to the Big Apple. Hailee takes off in her car to find peace, abandoning a Christmas special she is due to host for her producer, Monica
(Gibson).

After running over a small town judge’s Christmas display, she instead finds herself stuck in the town of Carver Bend with a $100 fine and sentenced to 25 hours of community service. While there, she’s befriended by Beck Thomas (Brown), a budding artist. He asks for her help to save the local community art center he runs for the town’s kids, by helping them build their float for the annual Christmas Parade – the winner will receive enough money to save the center from a pending sale. Short on Christmas spirit, due to an experience in her past, Hailee has to find a way to inspire both the kids and Beck – as well as herself – to bring back the spirit of what Christmas is all about, love.

“The Christmas Parade” is a Chesler/Perlmutter Production. Lewis Chesler, David Perlmutter, Rob Vaughn and Dominique Telson are the executive producers.