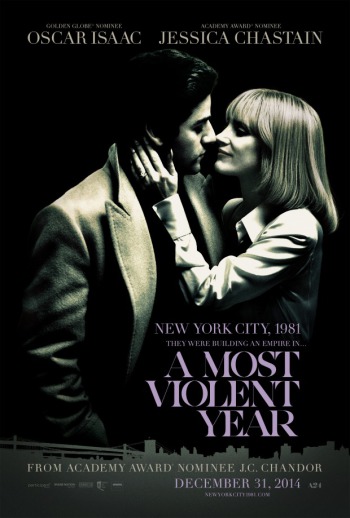 The National Board of Review announced their picks for best actors and films, and anyone looking for clarity as to what films or actors are locks for Oscars is out of luck.

“A Most Violent Year” was named the best film of the year by the NBOR.

“A Most Violent Year is an exhilarating crime drama with a compelling story, outstanding performances, and an elegant cinematic style,” said Annie Schulhof, NBR President. “J.C. Chandor has given us a new and provocative perspective on the American Dream.”

The august group – who are not Academy voters – consists of “knowledgeable film enthusiasts and professionals, academics, young filmmakers and students.” They “viewed over 272 films this year including studio, independent, foreign-language, animated and documentary selections,” according to their website.

The group manages to nab the biggest, A-list stars for their yearly soiree, to which only a handful of press are invited. The event is not televised so that stars like Brad Pitt, George Clooney and Meryl Streep, can give hilariously funny and raunchy speeches to a roomful of other A-listers without feeling the inhibition of being on TV. It’s a great party, but you need stamina; the gala and speeches usually go on for four or five hours.

The organization particularly loves George Clooney and Clint Eastwood, and it seems one or the other is nominated for best actor or film every year, not that we’re complaining.

Hosted by Lara Spencer, this year’s gala will take place on January 6, 2015 at Cipriani 42nd Street in New York City.

Best Film:  A Most Violent Year

Best Animated Feature:  How to Train Your Dragon 2