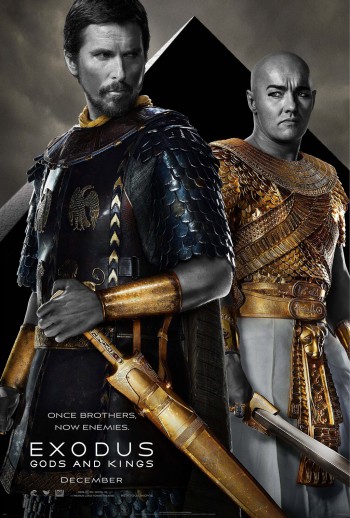 SYNOPSIS: Christian Bale plays the Biblical leader Moses, who rises up against the Egyptian Pharaoh Ramses, setting 400,000 slaves on a monumental journey of escape from Egypt and its terrifying cycle of deadly plagues.

REVIEW: “Exodus: Gods and Kings” is taking some flak from Biblical scholars and film critics. I think because it portrays Moses as a warrior figure and includes other elements that stray from the book upon which it’s based — that would be the Bible. There’s also the fact that God, who pops up at the burning bush and throughout the movie, is played by 11-year-old British actor Isaac Andrews. And played very well, I might add. I like this departure from, say, bringing in the more cliché casting of Morgan Freeman to voice the Almighty.

Anyway, here’s what I have to say about all that: It’s a movie. I don’t really expect movie adaptations, Biblical or otherwise, to follow their books to the letter. I’m as Christian as the next girl, but it doesn’t bother me to see dark tales about Biblical figures in desperate situations. It didn’t bother me when Russell Crowe played Noah that way either.

I wouldn’t say I’m necessarily a fan of what I like to call “sword-and-sandal movies.” They’re usually much the same and don’t vary too far from the typical scenes of warriors battling it out and leaders shouting at their followers to “Fight!” and “We shall prevail!” and the like.

“Exodus: Gods and Kings” has those scenes, too, but it’s also got the most excellent Christian Bale as the aforementioned Moses, Joel Edgerton as Ramses, John Turturro as Seti, an unrecognizable Aaron Paul as Joshua, and Ben Kingsley as Nun. Sigourney Weaver makes a few appearances as Tuya, but she’s mostly relegated to strolling into rooms in a mighty way and staring disdainfully at Moses, whom she wants dead. I love her, but it’s an odd bit of casting for someone who’s carried entire movies battling aliens. But she’s Sigourney Weaver and can do as she pleases, including starring in the next three “Avatar” movies coming out in 2016, 2017 and 2018. So there.

As for the storyline, “Exodus: Gods and Kings” follows the book adaptation — that would be, again, the Bible — fairly well, other than Moses being a dark warrior type, but look, it’s the Old Testament and that’s how they did things back then.

We begin with Moses and Ramses growing up together in the palace of Ramses’ father, Seti. Fast forward to adulthood and Ramses rules Egypt, with Moses as his trusted counsel. While inspecting a division of Jewish slaves, the wise elder Nun tells Moses that he, too, is Jewish. Of course, when Ramses finds out, he banishes Moses to the rugged terrain, where Moses meets and marries Sefora (Maria Valverde) and settles into a quiet life of shepherding.

Until, that is, one day when Moses is rounding up some stray sheep, is knocked flat by falling rocks, and has a one-on-one with the boy-God, who instructs him to free the 400,000 people enslaved by the pharaoh by leading them across the Red Sea and into the promised land. God helps out by sending seven impressive deadly plagues – locusts, blood-red rivers, frogs, boils, diseased livestock and so on and so forth.

“Exodus: Gods and Kings” isn’t really a spiritual movie in a way that makes you want to run out and join the nearest religious establishment. But I don’t think it’s meant to be. It’s still a good movie with great special effects, impressive action sequences, and even a little romance here and there.

Sex/Nudity: A husband and wife kiss, and sex is implied.

Violence/Gore: Action violence includes fighting and battle scenes, on foot, horses and chariots. The seven plagues are gruesome and include blood, death, destruction and chaos. Bird entrails are used in one scene to predict the future. Slaves are whipped, several people (including children) are hanged, and a massive group of people drown. A large group of warriors fall from a cliff and die. It appears that horses die (though I’m sure none were harmed in the filming of this movie).

Drugs/Alcohol: The pharaoh drinks what appears to be wine with meals.

Will Grownups Like It? If you don’t mind a different interpretation of the Bible and aren’t grossed out by plagues and battle scenes, “Exodus: Gods and Kings” is worth a look.