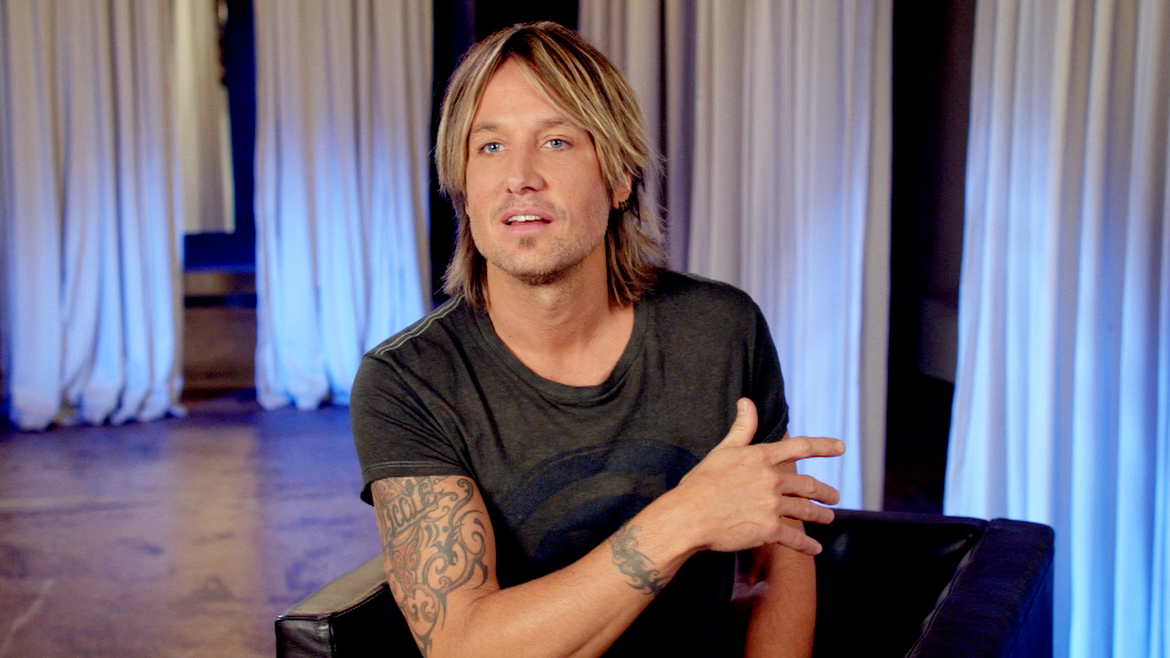 Keith Urban joins Jennifer Lopez and Harry Connick, Jr. as judge on the next season of “American Idol” premiering on FOX January 7, 2015. Keith spoke to journalists by phone this week about the show’s new twists and what he enjoys most about his job.

On changes in the upcoming season of American Idol:

We sent over 200 people through to Hollywood and then we narrowed it down, of course, and then even further down to get to our top 48. Those 48 guys and girls we took into the House of Blues in Los Angeles to put them into a live club setting where the band was set up. They got up on stage and did a song each in front of the audience in that club. We’ve never done that before….

I really wanted to see what they were like in front of a club setting. Can they perform? Do they know how to perform live? Do they know how to move and connect with an audience? So, that was a really telling environment to have them in. I’m glad that we got to do that.

On what the addition of Nashville music mogul Scott Borchetta will bring to the show:

He just brings a different kind of eye and ear and view, I think, an overall view. The best way to put it, I think, is having a sense of the relativity of an artist in today’s marketplace and what sort of audience are they going to find, what kind of record would they make? I just feel like he’s brought something very, very fresh into the family.

On the fun of doing the auditions in various cities:

Getting to be on the set with Harry makes it a really fun day. Half the stuff that we talk about and engage in with Jen and all of us ends up on the cutting room floor. Those audition cities are a blast. I can’t single anything out, but that whole part of the journey is really enjoyable for me….

They’re really long days. We’re often hearing 70 to 80 people in one day, one after the other. But they’re also the cities where stuff really unexpected and magical happens, and it’s always great that the cameras are rolling. We got plenty of that this year.

On the city with the most talent this season:

I would say San Francisco delivered in spades. We finished up there, and it was extraordinary. We sent an enormous amount of people through. But certainly, having said that, every town delivered some very strong people.

We went to six different cities mostly spending two days in every city. I’m sure we saw 500 to 600 people probably in the whole audition process, and we sent well over 200 through to Hollywood.

On whether we’ll see past contestants come back for another shot this season:

There’s been a few people that have come back to try out again. For me, it’s always interesting to see what’s happened in the time since. What have they learned from not making it further in the previous seasons, and have they changed? They were cut at a certain point. How did that make them feel, and how did they channel that?

For me, personally, I’ve almost gotten more inspiration from the naysayers in my life than the people who believed in me. They’ve been a strong motivational force at times when I’ve seemingly failed or not gotten what I was trying to do. Those moments have ended up being huge motivational moments for me. So, I’m interested if it’s the same for them [past contestants].

On being a contestant on competition TV shows when he was a kid:

I think one of the things I’ve always loved about doing this show is that I did a few of them as a contestant when I was very young in Australia. When I was nine years old, I went on a show called “Pot of Gold.” Then, there was another show called “Have a Go Show.” There was another show called “Stairway to the Stars.” For whatever reason, my parents thought these shows were a good place for me to go to maybe not only hopefully get a leg-up career-wise, but also get some advice and feedback, which I certainly did.

Some of it’s pretty scathing. So, I know what it’s like to be humiliated in front of everybody on TV. I was thinking this morning, unfortunately, I haven’t been able to find any of those performances. Then, I thought it may not be unfortunate. It may be a good thing I can’t find any of those. The only one that exists is when I was 16, and it was just a pretty average performance. But I have a lot of empathy for these guys and girls on the other side of the desk singing, and I do feel what they’re going through.

On bad experiences while playing small clubs in Australia early in his career:

Oh, infinite, infinite bad experiences. I’ve been fired from a gig before. I’ve had every kind of insult and abuse hurled at me on stage. Some of it verbal. Some of it physical, literally things thrown at me. Especially growing up in Australia, you play at really rough places there. But it’s where you learn everything. I learned everything playing in tiny clubs and slowly building that way up.

On coming to America for the first time with nothing:

I was 24 when I moved to Nashville. I really didn’t know anybody and just showed up because I believed I was supposed to be there. I was afraid it would take a long time…. Someone said to me one time after being there five years and still nothing really happening, “Did you ever think about going home?” I said, “No. Never.”

On whether his wife, Nicole Kidman, and their kids watch “American Idol”:

Yes, and I love them watching because I like the way they respond to people. It’s very interesting. They watch like everybody else does and either respond to someone or they don’t, and I’m interested in that because we can get sort of myopic with it sometimes being in the middle of it all. It’s great to get just a totally fresh perspective. I often ask Nic what she thinks of various people and who she likes and why.

On the recent death of his father-in-law:

The loss of Nic’s dad was just a huge, huge – I can’t even describe what that moment was like for our family. I was very, very close to Nic’s dad. It’s very fresh. It’s very recent. I was obviously scheduled to go to Brooklyn and do two days shooting “Idol,” and it was an amazing thing that a TV network would step in and say, “Don’t you worry. You be with your family. You’ve got to be there. We’ll figure out a way to cover all this. Don’t worry about it.”

I don’t take those things for granted. You would think people would have a heart, but you often don’t see it. So, when I saw it in action with all of the network at FOX and all of the people involved in “Idol,” and then, of course, my fan base because of a couple of shows I had to miss, it was an extraordinary thing. Adam Lambert stepped up and filled in for me in Brooklyn. It was an amazing thing to see that support. I was very, very grateful.