Marissa Jaret Winokur is best known for winning a Tony Award for her performance as Tracy Turnblad in the musical version of “Hairspray” with leading man Matthew Morrison of “Glee” fame. Before that, she was in “Grease” on Broadway and has since appeared in a long list of movies and television series, such as “American Beauty,” “Scary Movie,” and “Curb Your Enthusiasm.” She’s also a cancer survivor who became a season 6 contestant on “Dancing With the Stars.”

When I interviewed Marissa by phone, we started our fun conversation commiserating on the painful realities of Spanx and then moved on to her latest professional projects. She appears in a new independent film and is gearing up to try her hand at a late night version of “The View” in which the hosts will interview guests about sex. She’s also writing, including a recent essay for xoJane that got a lot of online buzz.

Her indie movie is called “Muffin Top: A Love Story.” It’s a hilarious take on what women go through to try to live up to today’s ridiculous standards of attractiveness. Directed and co-written by the star of the film, Cathryn Michon, “Muffin Top” is filled with some of our best comediennes, including Melissa Peterman, Dot Jones, and the late Marcia Wallace from “The Bob Newhart Show,” as well as David Arquette in an unusual role for him.

“Normally, I read a script, and I know exactly what character they want me to be – the funny sidekick or girlfriend,” Marissa says. “But this one, I was like, ‘Oh, I could be her sister, I could be the doctor, I could be her friend.’ Except for [one character], I could pretty much have played any woman in this movie. So, I said, ‘I want to be a part of it just solely because of that because that is so rare.’” Ultimately, Marissa’s role was as a very naive friend of the main character.

“Muffin Top” turned out to be Marcia Wallace’s last film. Marissa calls working with her “an honor.” “I’d met her, but I’d never worked with her. She was so perfect and ‘on.’ She was such a classy, classy woman – what I aspire to be. I hope to be working up until my end, and I hope to be funny and working with great people. She was exceptional,” Marissa says. 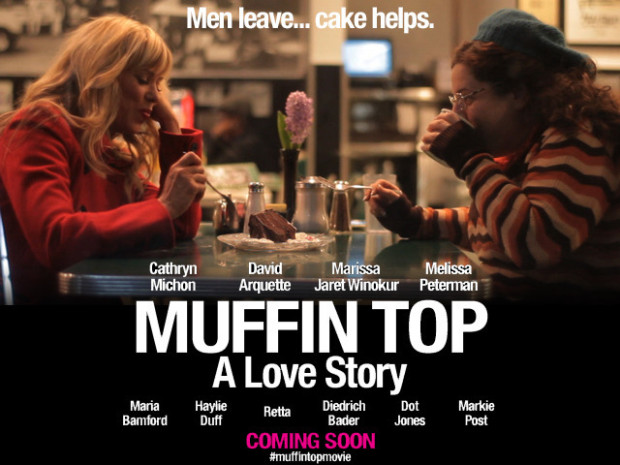 The first episode of the talk show, “All About Sex,” will air on The Learning Channel (TLC) Jan. 10, 2015 at 11pm Eastern, and besides Marissa, it will include Margaret Cho, Heather McDonald, and sex therapist Dr. Tiffanie Davis Henry as hosts.

“People say, ‘You won a Tony Award; why are you doing a talk show?’ I’m like, ‘Because there’s not a Broadway show for me to be in right now,’” Marissa explains.

“I love being a part of the entertainment business. I don’t do stand-up. I don’t do cabaret just because I like being with casts. I like the whole thing of working off of other people. The only thing I do alone really is write, and even that, I have a writing partner. I like the collaboration, and to do a late night comedy talk show about sex with women I respect and who are really funny women is just fun,” she says.

Even though the show hasn’t begun shooting yet (they will shoot the day before the shows air), the project has already caused Marissa to make a shocking discovery about herself. “We’ve been doing a lot of chemistry stuff together, hanging out and promo shoots and interviews,” Marissa says. “It’s crazy! What I learned from the process, which I never would have thought, is that I’m so much more conservative than I thought I was. ‘Wait a minute, I’m the Charlotte?’ In my circle of friends and my world, I’m not the Charlotte!” (She’s referring, of course, to the most conservative character on “Sex and the City” played by Kristin Davis.)

“When Margaret Cho talks about sex, you feel like you’re a person who has never done anything…. My craziest sex experience isn’t even a blip on Margaret’s radar,” Marissa says. “Then, Heather is super outspoken and funny, and Dr. Henry – she is a sexual therapist/relationship doctor. So, she’ll talk about things in such a clinical way.”

Marissa thinks the show will work because each of the hosts has a different opinion. “Margaret is like, ‘You should experiment with new things like maybe bring new partners in,’” Marissa says. “I’m like, ‘No, that makes it even more exhausting and more people to share my popcorn with!’” As the mother of a six-year-old, she says that sex often ends up very low on the to-do list, and this fact has brought some good-natured chiding from her co-hosts.

Besides the film and TV projects, Marissa is increasingly turning her attention to writing these days. Her essay for xoJane this month was widely shared. In it, she talks about how interviewers and even the “Dancing With the Stars” people have focused on her weight, and she describes her epiphany that becoming thin is not necessarily the recipe for happiness.

For years, she thought that her weight was what was wrong with her life. “No, that wasn’t what was wrong with my life. The way I was treating myself, things that I didn’t deal with…. It’s so obvious when you take a step out of it, but until you figure that out yourself, no one can tell you that,” she says.

Now, at 41, she contends, “I’m very happy with what I’ve figured out on this journey,” and she expects that her next 40 years will be more content because of it. She was also very gratified to see the xoJane article strike a nerve with so many people, especially people she respects like Marc Shaiman, the composer of “Hairspray,” who shared it on his Facebook page and helped to spread it around.

Writing is therapeutic for her because for a long time, she felt she couldn’t do it due to dyslexia. “Now that I’ve got a couple of scripts written, and people have said, ‘Yeah, this is good; I enjoy this,’ it gives me the courage to keep going,” she says.

Her writing partner is Nina Millen, who has created her own buzz online with the Beyoncélogues – videos in which she performs the lyrics to Beyoncé songs as dramatic monologues. Nina and Marissa are working on a web series that they will shoot early in 2015.

One of Marissa’s role models is Cathryn Michon, who created “Muffin Top.” “She wrote the movie, produced the movie, directed the movie,” Marissa says. “Watching her in the last couple of months roll this movie out, get it on demand, and go to each screening … she inspired me so much.” Cathryn also encouraged her to write, and that’s what Marissa most wants to do at this point in her life.

“If the wand was over my head saying, ‘You can do anything; you can go back to Broadway,’ I would want to write an amazing romantic comedy script for either a series or movie. That’s what’s going to happen. That’s my next chapter, for sure,” she says. And while she’s going to act in the web series with Nina, she isn’t always thinking about writing projects for herself.

“I have an idea for something that I want to write, but it’s more about who I was in my 20’s and my 30’s, so that would not be for me to act in because I’m in my 40’s now. There’s something interesting about a 29-year-old moving forward in her life,” she says.

“Muffin Top: A Love Story” is currently available on VOD, and watch for Marissa on “All About Sex” starting Jan. 10 on TLC and for her web series next year.