A highly decorated Navy Seal who served four tours in the Iraq War, Kyle was shot and killed at a gun range in February 2013 by a fellow veteran who suffered from post-traumatic stress disorder. The film is based on Kyle’s autobiography by the same name.

“The importance of my scenes are showing the audience why Chris Kyle was the man he was,” Ben says. Wayne taught Chris how to hunt, which set the stage for Chris’ skill as a sniper.

“[In the scenes], you see how I’m enforcing discipline and also values,” Ben explains. “There’s a scene where I’m teaching Chris that there’s three different kinds of people in the world. There’s sheep, there’s wolves, and there’s sheepdogs…. Wolves prey on the weak, and I try to instill in him to be a sheepdog because they protect the flock. They look out for the weak, and that’s pretty much what a sniper does when he’s sitting on top of a building and protects the soldiers.”

Ben didn’t have a chance to meet Chris’ parents, who decided not to be involved with the film, although Chris’ wife was involved. He did have a great deal in his own life that he could use to help him create his real-life character, however.

“From what I’ve read and the research I did, my father is a lot like Mr. Kyle – and just the way I was raised. My father taught me and my brothers how to hunt. And the same sort of values and discipline and hard work,” Ben says.

“When my kids want to do this or that for fun, I say, ‘You want to know what my dad and I did for fun? Our special time together? We did chores!’ That was our play time together. And my brothers – one’s a state trooper and the other is a professional soldier,” he says.

Ben did shoot one scene with Bradley Cooper and Sienna Miller, who plays Kyle’s wife, but the scene didn’t make it into the film. Nevertheless, he did get to interact with Bradley during filming. “Bradley was always around because he’s also a producer on the film. So, he was always on set. Bradley was great, welcomed me to his team. He pretty much stayed in character the whole time, so he was always in the Chris Kyle mode, which I respect,” Ben says.

What was it like to work with Clint Eastwood? First and foremost, Ben calls it an “honor.” “It was quite a milestone for me to get to work with him, and he was very succinct in what he wanted from his actors. He knew exactly what he wanted. He’s very sharp. Being his age and making the kinds of films that he’s making and having the drive he has – and he has that energy on set – is amazing to me. He thanked me for being there. He was just very kind,” Ben says.

Ben has been doing a lot of press for the movie, but he didn’t go to New York for the premiere. That’s primarily because he has five children! “My middle son, who’s 23, is a singer/songwriter/musician, and he had a concert that night,” Ben explains. “Also, my 12-year-old boy had his first basketball game of the season. I chose to go family as opposed to career.”

Ben has been working steadily in the industry for more than 20 years, but he has only now ventured beyond acting to become a producer of an indie love story called “Starcrossed.” He also stars in the movie alongside Mischa Barton, Grant Harvey, and Eric Roberts.

“My oldest son is 26, and one of his really good friends is an LMU [Loyola Marymount University] grad in the masters film program,” Ben says. “I’ve known this kid since he was like 10, and he comes to me with this script. His name is Chase Mohseni.”

Ben thought the script was very good, so he shopped it around and found investors. Then, Chase directed it.

“It was the most fun I’ve had in 20 years in my career,” says Ben. “Creatively, it was so much fun – the casting, the producing aspects – because I had my hand in everything, which is kind of neat. As you know, being an actor, you have no control over anything except your performance.”

“Starcrossed” screened at the San Diego Film Festival, where it was very well-received, and it is now being submitted to other festivals, as well as potential distributors. 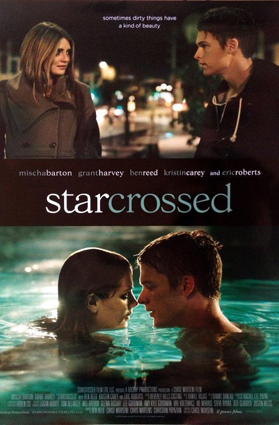 Ben admits that producing has been stressful but worth it. In fact, he’s all set to do it again. “It’s kind of like starting over because it’s a new part of my career,” he says. “I’ve already got two other projects, and we’re trying to finish up on the scripts right now. We would like mid-year to be starting on one of the two. Now that I know what I’m doing – sort of – it’s not going to take as long.” One of the scripts is a thriller, while the other is a cop mystery drama.

“I so much love the business, and I’m very passionate about the entire process,” Ben says. He even enjoys auditioning. His two youngest children had a different experience, though.

They thought they wanted to be actors until they got a commercial and discovered how tedious the process can be. “They hated it,” he says. After having to shoot the commercial over and over and over, the kids wanted to go home. “You’ve gotta finish the day, and then, you never have to do it again,” he told them.

Working on a project like “American Sniper” has definitely upped Ben’s profile as an actor, although he admits that he’s still getting the hang of promoting projects on social media. (You can encourage him by following him on Twitter @The_Ben_Reed). While working on his own film projects, he’s currently waiting to hear if he’s going to get cast in a couple of film projects and a cable television show.

Mostly, though, Ben is just grateful to get to do what he loves best, and getting to act in an Oscar-contender with the likes of Clint Eastwood is just gravy.