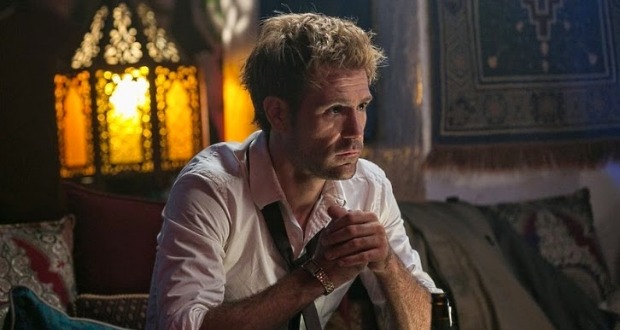 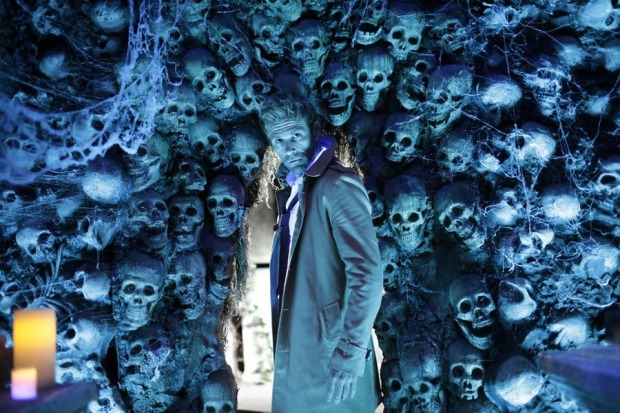 This week, a family in crisis reminds Constantine of his own troubled upbringing, as well as offers him a chance to improve on his child-saving game. And although Zed’s not dead, she’s not a part of one of the more successful episodes of this truncated season (more on that later).

The camera pans over a foggy lawn and peers into the beautiful Cooper home, where we see some blood spatter and then a man hanging out … on the ceiling. Badly beaten, he whispers, “Please, no more” to an unseen assailant. He’s then mercifully dropped to the ground, right in front of a cowering little girl. Soon Birmingham police arrive to investigate the double homicide and question the only survivor and eyewitness, young Emily. They don’t get much more than some infighting and a shattered coffee mug for their trouble. 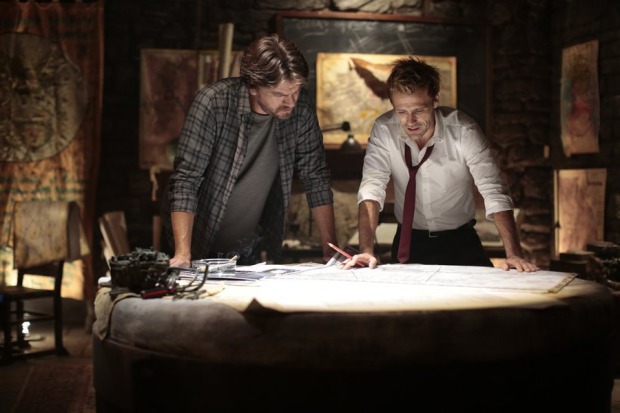 Back at occult investigator headquarters, Constantine and Chas are having breakfast alone because Zed is in art class. You read that correctly: despite having a map’s worth of blood spots of possible demonic activity to pore over, Zed is fine-tuning her cross-hatching. So Chas presses Constantine to take a look at the stigmata map, and then they’re on their way to Birmingham to investigate the Cooper homicides.

With Chas acting as a lookout, Constantine enters the crime scene and licks a wall (presumably to determine what caused the burning smell he detects). Disgusted, he turns away in time to be startled by Manny the Angel flexing his wings. Constantine scolds Manny for scaring him, and then they wax philosophical about good (and Chaotic Good) versus evil aka The Rising Darkness.

And solid scares aside, this is one of the more riveting scenes in the episode. Manny’s role in the impending battle is finally sort of defined: because he cannot directly influence events in the mortal realm (a little side effect of free will), he is limited to guidance in the form of cryptic counsel. Still, he tries to impress upon Constantine the significance of his participation: “You’re going to stem the tide of its [Rising Darkness] attacks.” But when John does a “who, little ol’ me?” routine, Manny cuts him off, telling him he’s no St. Peter or Joan of Arc. Rather, he’s a “desperation move” (here I wondered if the writers were worried that calling John a “Hail Mary” would be blasphemous). Manny then offers what little help he can, advising John to remember what it was like to be a boy with an abusive father. 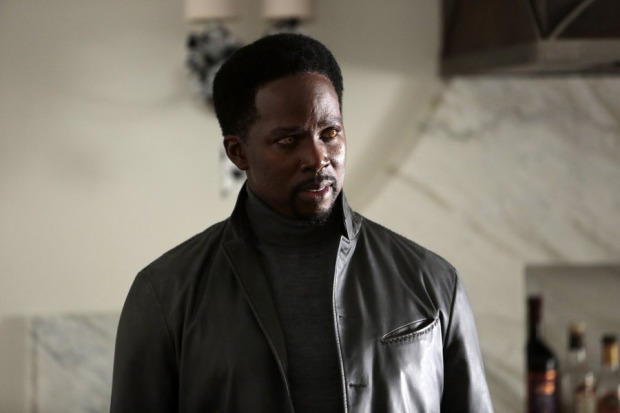 During this pep talk, John finds out that the attacker was the survivor or rather, the demonic spirit that possessed her. Apparently, Emily was a pit stop on a “psychic railroad” made up of Ley lines. Ley lines possess an electromagnetic energy that somehow aids supernatural travel, with a boost from the Rising Darkness™. The demon quickly finds a new host in Henry, a young boy who’s bullied at school. Henry’s parents have different approaches to helping him deal with the bullying: his mother coddles while his father wants him to fight back. We later learn that this domestic turmoil is precisely the sort of thing that beckons a traveling evil spirit. That all this occurs around Halloween only sweetens the deal.

Although there are some false starts, Constantine identifies the evil spirit as that of Marcello Panneti, a man who was horribly abused as a child by his father. The twist is that Marcello’s not dead, but a catatonic patient at a nearby hospital for the criminally insane. Seems Marcello killed his father (with the same ax that was used to cut off his fingers), and the trauma of the incident sent his spirit on a vengeance quest. When John confronts Marcello-as-Henry, he follows Manny’s advice and appeals to the young Marcello, who was just another scared boy. So Marcello’s spirit leaves Henry and returns to his body, which is no longer catatonic and now spitting and struggling against the hospital aides.

Creepy/evil children tropes aside, this was a good episode. For all of Constantine’s swagger and quickness with a Mayan incantation, in some ways he is still that little boy fighting off a monster. Although I don’t think we need much reminding that Constantine is human, it doesn’t hurt to have a backstory that makes us sympathetic of the protagonist.

And now for the cons: the show’s writers have excised some of Constantine’s best-known characteristics (the smoking, the bisexuality), but so far, he remains the most consistently written character. Obviously that’s important, given that he’s the lead. But they really need to figure out what’s going on with Zed and Chas. So far, it feels like we’re watching Zed and Chas play a game of musical chairs for the part of Constantine’s Companion. We’re six episodes into the season, so we should have a better feel for both characters. Sure, Chas let it slip this week (with a little help from the Sword of Night) that his wife left him, but we still don’t know how and why he teamed up with John. Although we’ve seen more of Zed than Chas, her mysterious past was introduced only to be waved away by a secondary character last episode. NBC has stopped production on new episodes of “Constantine”, meaning that there are only seven episodes left to give viewers an audience to watch and/or care. But I’m here till the bitter end (or hopeful hiatus).

Throughout the episode, I pondered the relevance of the Caliban reference in the title, given its mostly negative connotations and allusions.

My heart broke a little when John described his abuse at the hands of his father, and how it made him consider suicide.

What did you think of this Halloween-themed episode? How did you feel about Manny’s explanation of his part in the upcoming battle? And were you just as baffled by Zed’s “art class” disappearance? Tell us in the comments!