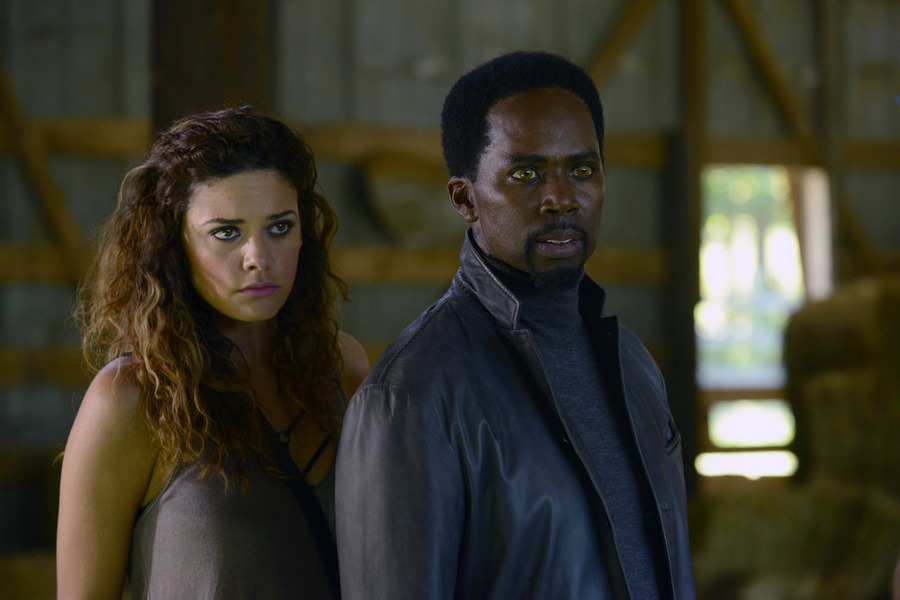 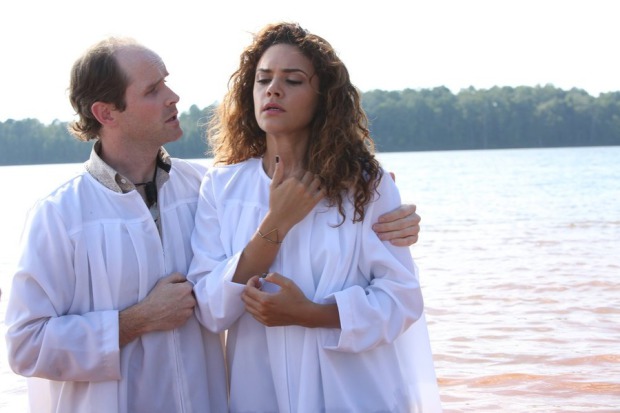 They say the greatest trick the Devil ever pulled was convincing the world he didn’t exist. So I guess one of his possible minions hoodwinking a servant of God is just par for the course.

This week’s “Constantine” mystery concerns a Briarwood, Kentucky pastor, Zachary (Patrick Carroll), who survives a rattlesnake bite to heal members of his congregation. One man gets his leg back, another his sight, and we don’t need John Constantine to tell us that there will be hell to pay for these “miracles.”

In Atlanta, Zed’s in art class again, but we actually get to join her as she and her fellow students sketch (paint?) a nude male model. She has a vision of snakes coiling around her ankles and hightails it back to Occult HQ, but not before making a date with said nude model.

John matches her vision with a bleeding spot on the scry map, and then they head to Kentucky without Chas because he’s busy making up with his daughter, which I guess means we’ll only see the whole crew together every fourth or fifth episode.

Once in Briarwood, John and Zed argue about religion and faith before witnessing some of Zachary’s miracles. Zed admits that she likes to believe that there’s a guiding hand, and Constantine tells her that the hand she’s describing is actually more of the “judging and damning” variety. He sulks about not being one of God’s favorites when he hears Zachary chanting in Enochian, the language of the angels.

So Manny the Angel is summoned with dried myrtle and a “please,” and he recites a line of bad poetry that helps John and Zed find a wounded angel. The angel, Imogen (Megan West), tells them that she was taking a mortal to heaven, but the dying jerk snatched a feather from her wing. This is very bad news, as a damaged wing will keep Imogen in a physical form on earth, which means she will eventually die. 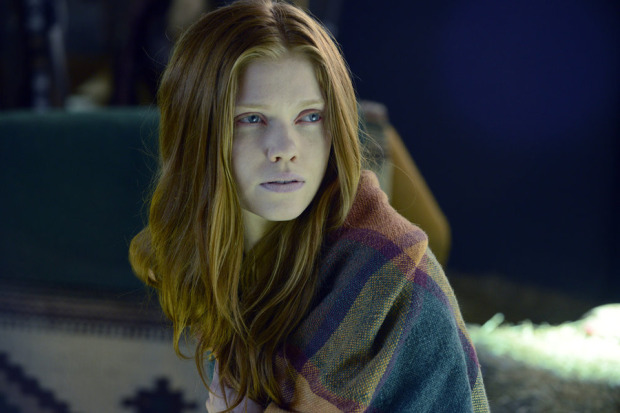 Constantine rails at Manny for not being upfront about the earthbound angel, but Manny says that he really didn’t know about Imogen because the angelic order is “compartmentalized” to prevent interference with humanity’s free will. Who’d have thought that Heaven functions a lot like a bureaucracy? Manny adds that the Rising Darkness has weakened the barrier between this world and the next, so they can expect more unsavory things to slip past.

And speaking of the Rising Darkness: Nate, the first guy Zachary healed, has become a “ghoul” and is running around town killing people. When confronted, Zachary refuses to believe that he performed anything but a miracle. He even banishes his sister when she questions the source of his newfound power.

Zed goes undercover and underwater at a mass baptism to retrieve the feather, only to be chased by the rest of the people who Zachary healed. It turns out they also want to return the feather to Imogen, because she’s actually a Fallen angel. And Zachary didn’t snatch the feather on his way to Heaven—Imogen gave it to him on his way to Hell.

There’s a standoff: Imogen threatens to kill Zed unless John undoes the protection spell that’s keeping her from flying away, and John demands that Manny finally take a stand in this fight. And so Manny does; he takes Zed’s form and rips out Imogen’s heart. He’s not happy about it, and tells Constantine there will be consequences for his actions.

Harold Perrineau did some great work this episode, portraying Manny as both exasperated and devoted. He grouses with Imogen about God essentially betting on the wrong horse, but pulls back when he realizes the spell he’s falling under. So when he has to pick humanity over a fellow angel, he seems heartbroken, even if she is Fallen.

Unfortunately, Zed remains a weak link in the overall proceedings. She waxes philosophical with John about needing something to believe in, but since we still don’t know what she’s running from, we don’t know the reason for her crisis of faith. She’s still just an enigma for mystery and plot’s sake. The episode ends with her bailing on her date with the model, who’s not dejected so much as scheming in a car with a guy who has a crucifix similar to hers.

But at least the show is starting to fill in the blanks on what’s at stake and who’s at war here. I hope it’s able to maintain this momentum, because the story is far more interesting than its individual players. “Constantine” suffers when it falls back on teasing future plot points rather than dealing with what’s already been established. We need more of a reason to care about what’s going on than the promise of things to come.

Angels have a physiology pretty similar to ours, complete with a beating heart. Makes you wonder if they’re the prototype, and if so, why we’re not nearly as powerful.

I think Chas was left out because he couldn’t have been so easily disposed of by Imogen, which again, is a problem with the show’s writing.

Did you also feel that the stakes were raised with this episode? Were you happy to see Manny finally take a stand? Sound off in the comments below!