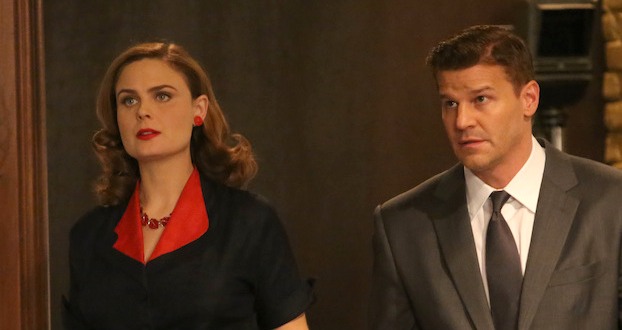 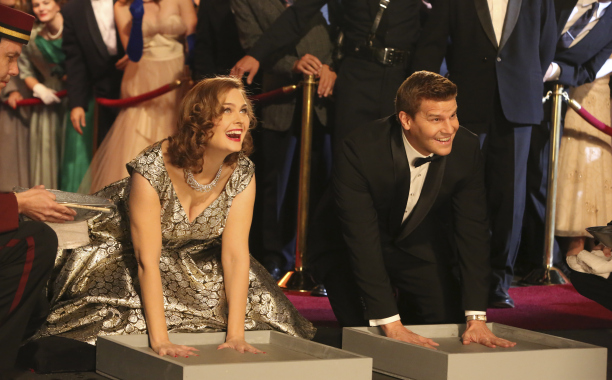 “Bones” hit its 200th episode this week! Starting out in black and white with an ode to Hollywood Glamour and David and Emily was classic. I wonder if they will get stars on the Walk of Fame?

Can you say awesome! Oh my gosh, I LOVED this 200th episode! It was so fun and so visually appealing. I am a lover of the old classics, and this was such a great take on movies such as Alfred Hitchcock’s “To Catch a Thief” and “North by Northwest” – from the opening scene with the two driving on a winding road in their old convertibles, to the plane scene where Cary Grant (David) gallops down the runway in hot pursuit of the damsel in distress. I just loved it!

In the episode, Brennan is with the LAPD in the 1950s and gets no respect from the department. Back then, it was all about the boys. Booth is a notorious jewel thief that she’s trying to catch, but after a botched heist and a dead body, the two team up to catch the real killer and “To Catch a Thief,” and maybe find love, too.

It had all of the 50’s glamour – chic retro clothes, cool cars, an old style club with Cuban music (reminded me of Ricky Ricardo), fun talk, and plenty of martinis. Nice.

What was really fun was how they mixed in all of the characters: 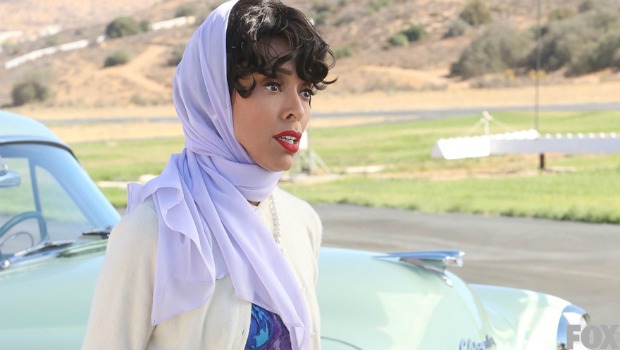 Loved the fun dialog – doll, sweetheart, darlin, fella, scram – it was great fun listening to the use of words and dialog from days gone by. And look at this photo of Cam (Tamara Taylor) – how great does she look?! I’m sure it was a hoot getting “dolled” up 50s style!

I have to address how GREAT TJ (Hodgins) was in his role. He was hilarious and perfect! The fun he had showed in the part. And of course, he and Angela were attracted to each other. It was great how they translated the characters back in time to fit the parts! Again, I loved it!

How about the club – The Velvet Fox. The set was great. I wanted to hop in and join them for dancing and a martini! And Booth and Brennan in their many costumes. Check this one out below – going back in time, right. 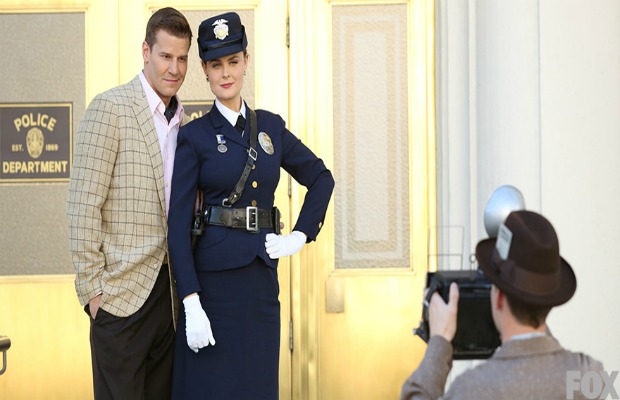 I just have to say again how much I enjoyed this episode. I’d love to hear what you thought of it. It was a fun change to the “Bones” of now. I’m quite sure the whole cast and crew loved it, too. I want another one of these episodes … or maybe a series – just so fun and glamorous.

Astonishingly, the ratings dipped from last week? How can that be? I’m pretty sure it’s because of the “time of year.” I admittedly wasn’t home last night, but, of course, taped it. I just can’t believe people would skip the 200th episode and stepping back in time to old Hollywood.

Here’s one of my favorite lines, which Angela said to Brennan: “Booth is a dreamboat I’d like to take  a sail on – how ’bout you?”