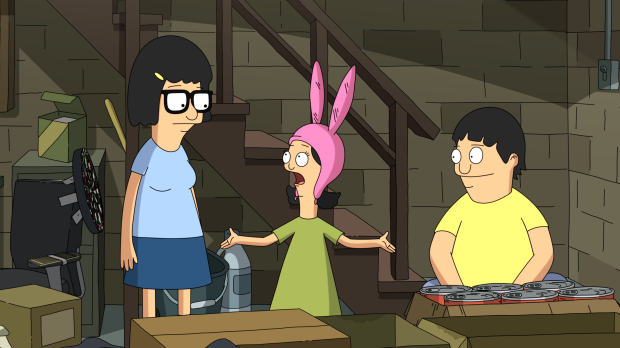 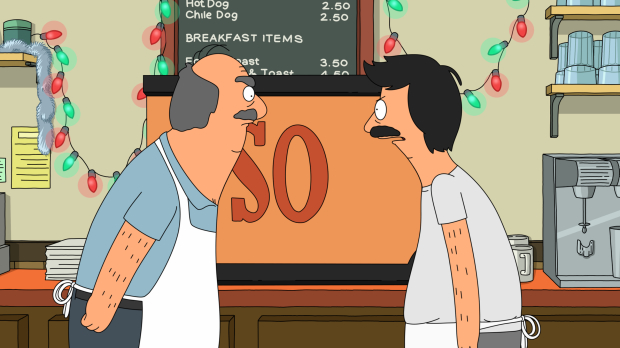 Was it really only a week ago that I was complaining about the lack of an ‘A’ story for Bob on “Bob’s Burgers“? (It was.) Well, “Father of the Bob” not only features Bob prominently, but it also provides a lot more of the Belcher dad’s back story. It’s a Christmas miracle!

And it’s actually Christmas for the Belchers who, with the notable exception of Bob, are excited to head to Big Bob’s Diner for Big Bob’s Christmas party. The Big Bob in question is none other than our Bob’s dad. Yes, we are finally going to meet Bob Sr. Well, just as soon as Teddy finishes his burger—or doesn’t. Poor Teddy can’t chew fast or slow enough for Bob, who drifts off into a reverie 30 years into the past that reveals the contentious relationship between the two Bobs.

First flashback: 14-year-old Bob is manning the grill (because Big Bob is getting his prostate checked). He serves up his “Baby You Can Chive My Car Burger” to one of his dad’s regulars, Henry (Carl Reiner). When Big Bob (Bill Hader) returns, he trashes Bob Jr.’s burger, literally and figuratively. You don’t need to have had a browbeating dad to feel Bob’s pain.

And it’s not the last time that Big Bob spoils the moment. There are a couple more flashbacks to milestones that Big Bob managed to spoil in 15 minutes or less. Eventually, we watch as Big Bob tries to make Bob (or Junior) a partner in his diner, but Bob turns him down, insisting he could never work for someone who doesn’t respect his craft. And so we have our rift, as well as a great riff by Bob on all the daily specials Big Bob rejected, including the “Crispy Brinkley Burger” and the” Richard Persimmons Burger.” 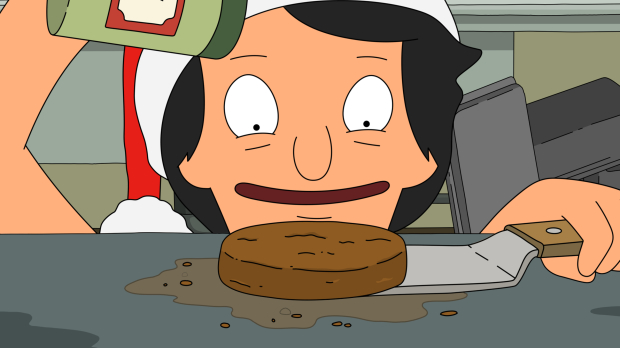 Back in the present, Bob is reminding Linda and the kids of his 15-minute time limit for interactions with his dad. But everyone’s distracted: Linda is indulging in some “Christmas magic” aka booze, and the kids are on a mission to make their dad a great gift because they forgot to buy him one (although Tina did remember to buy a hip-hop yoga DVD for their mom).

Despite the party auspices, Big Bob’s Diner is actually open for business, and Bob finds himself grilling alongside his old man. Ok, he’s actually manipulated by Linda, who is letting the “Christmas magic” work through her. But whatever the reason, two generations of burger men end up competing for Henry’s palate. Bob resurrects the “Baby You Can Chive My Car Burger,” which Henry loves, and is declared the winner.

Bested, Big Bob slinks off to the Junk Yard, a gay bar owned by another one of his regulars, Pete (Nick Offerman). Seems Big Bob enjoys line dancing and watching “Scandal,” which means he’s also one of Pete’s regulars.

But Bob’s victory celebration is cut short by the realization that his father didn’t actually want him to fail all these years—he’s silently been in his corner. This epiphany comes courtesy of the newsprint wrapping paper on the half-assed gift the kids give him (a souvenir snow globe that reads “Oh Snow You Didn’t”).

Bob goes after his father and admits—on the dance floor, of course—that he was a bad winner just then, but that he doesn’t regret following his own dreams instead of following in his father’s footsteps. And that’s good enough for Bobs Senior and Junior, which is good enough for me.

No, really, it is: sure, “Father of the Bob” isn’t overly ambitious in its plot or storytelling, but it provides some much needed canon, for lack of a better term. Bob can come across as a real sad sack, and last week’s recognition of his own subconscious sabotage had me worried. But after seeing Bob reject his birthright (“burg-right?”) and later defend the decision, I realized how key the moment where Bob absolved Gene of responsibility in his (that is, Bob’s) life really was. Big Bob isn’t the reason why Bob is unsuccessful, and neither is Gene. Which brings us back to Bob.

In case you were worried about the lack of seasonal festivities, the kids spent most of the episode racing to win a Mistle-Tony, a gift-giving award they created to recognize outstanding achievement in the field of brown-nosing. Tina surprised us all by not only leading the pack, but also dishing out excellent disses. As she constructs a multi-function chair, she snides “And this is a napkin holder, so I can wipe the floor with you.” That’s our girl.

I love Bill Hader, and I am delighted that he plays both Bob’s dad and Bob’s ex-con friend.

The kids’ Christmas gift wish list is as follows: a perm for Gene; an internship at Santa’s workshop, preferably in breaking and entering, for Louise; and a calendar of Australian firefighters posing with puppies in social situations for Tina.

What did you think of Big Bob? And which kid REALLY deserved the Mistle-Tony? Sound off in the comments!