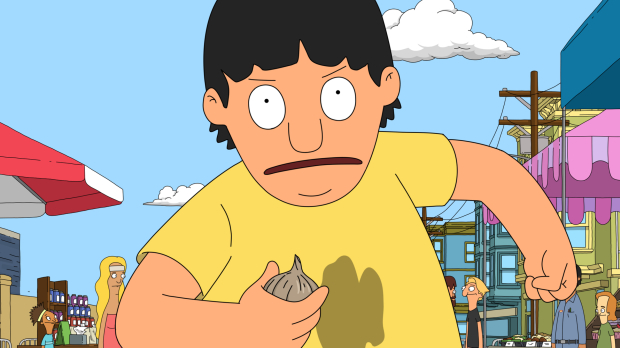 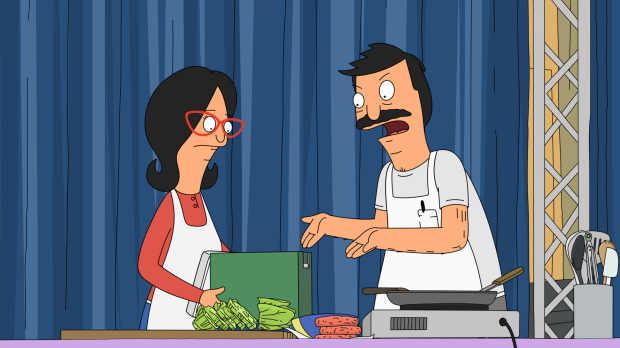 As much as I love the Belcher kids and the way Bob and Linda play off of them, I have longed for a Bob-centric episode this season. The Thanksgiving episode left him to his own devices, which meant day drinking and conversations with inanimate objects, but I like seeing Bob as a dreamer—the kind of guy who won’t settle for frying up frozen patties. “Best Burger” is a lot of fun, but also just … a lot.

The episode kicks off in the middle of the action: the whole town’s down at Wonder Wharf for the “Wharf It Down” Food Festival. Chuck Charles (Thomas Lennon) is back to emcee the Best Burger contest, and introduces the three contestants: Skip Marooch (Kumail Nanjiani), a successful restaurateur who’s making a pomegranate and green chili burger; Bob’s nemesis, Jimmy Pesto, who’s making an oregano burger; and then there’s Bob “The Slob” Belcher. Bob bristles a bit at this impromptu nickname, but Chuck’s already moved on to mocking Bob’s dish, declaring that Bob’s “Bet It All On Black Garlic Burger” is just a Stupid Burger.

Linda’s at Bob’s side, cheering him on as Chuck fawns over Skip. Bob’s flustered and sweating all over the place, but he’s pretty confident about his black garlic burger. He asks Linda to hand him the all-important ingredient, but she can’t find it in the cooler. We jump back a few hours to when Bob asked Gene to get the black garlic from the kitchen, and then we’re back in the present and Bob is furious with Gene over the missing bulb.

The kids are sent on a mission to obtain more black garlic and salvage the family name (and get a day off). The plan involves Linda’s not-so-secret money stash and the town’s specialty grocer, Figjam. The kids initially balk at having to go to Figjam, and we get another flashback in explanation: a few days ago, they were banned from the store for quibbling over prices (to be fair, $13 for a chocolate bar IS obscene). Back in the present, Louise attempts to charm Ray the owner (Andy Daly) with Tina’s help, which yields another great bit of Tina logic: “A no is just a yes upside-down.” 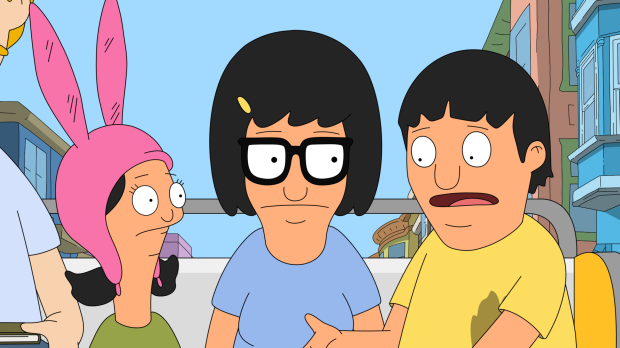 Just then Gene runs in to tell them that he has given the $20 bill to a boy on a skateboard, who actually asked to borrow only a dollar but will totally return with the change any minute now. Tina, who it seems has been burned by a boy on a skateboard before, realizes that the money’s as good as gone. So does Louise, so she snatches the black garlic and runs out of the store with Gene and Tina. She does promise to pay Ray after the contest.

The kids move from petty larceny to drag racing, albeit in Mickey’s (Bill Hader) pedicab.  He’s locked in a turf war with Manny, who doesn’t think Mickey has what it takes (huge calves) to be a pedicab driver. Mickey’s already got a fare; it’s Ron (Ron Lynch) who, being just the nicest guy, shares the cab with the kids and even offers to help them fight off their pursuers (namely, Ray).

The action then jumps back and forth from the pedicab chase to Bob and Linda stalling at the burger contest. Bob’s ready to throw in the towel, as he’s facing some pretty daunting odds: even if he can make the burger, Chuck has practically handed the victory to Skip. He’s also feeling generally outmatched by Skip, who is a successful chef and author, and manages to keep all of his hair on his head—and off the food (though Linda is doing a great job of acting as a sieve).

Manny and Ray are closing in on Mickey and the kids and Ron, and in the midst of all this Gene wants to hold onto the black garlic. Tina’s reluctant to hand it over or admit that Gene screws up everything, so she defers to Louise’s candor. Louise snaps her confirmation and goes on to explain that the family refers to making mistakes as “Gene-ing out.” And Ron adorably admits to occasionally Gene-ing out on the job.

Gene is shocked that he is a verb, and then appalled that he’s a bad verb at that. He wants to redeem himself with a little help from his sisters (and Bob Marley). After a little misdirection, he snatches the garlic from Louise and endures the ultimate test to his attention span and appetite: cupcake-flavored ice cream, then pizza tacos, and finally, a hot fudge car wash. But he delivers the garlic to Bob, and then Bob serves up an “amazing” burger and “excellent mouth feels”. Still, he loses. Skip and Chuck are thrilled.

Before you get too upset over possible callbacks to the “Family Fracas”  episode, know that there’s a happy ending: Bob’s Burgers has a line of customers down the block, including Skip Marooch. The kids get their day off and a trip through the hot fudge car wash.

Again, there’s a lot happening in this episode, and the story ends up strewn along the boardwalk. But it’s all very funny and more importantly, a bit transformative. Yes, we see once again that the Belcher women manage to have some grace under pressure while Bob and his son flail. But what’s new is the take on father and son’s drawbacks: Bob realizes (with Linda’s help) that he relies on Gene’s lack of reliability. This sheds new light on his near-reflexive acceptance of failure—not just his own, but that of everyone around him.

Linda assumed Rocky was undefeated because he “ran up all those stairs.”

“It’s not like we have a whole bunch of honor to spare, is it?” – Louise, on being a Belcher

Whose burger would you have tried? Is Bob really scared of success? And did you catch any of the book titles that Ron was carrying? Sound off in the comments!