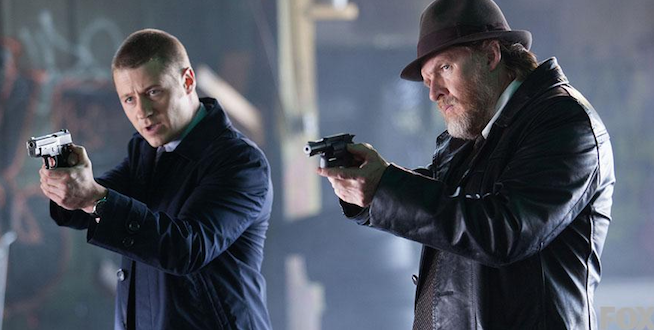 I’ve done it. I finally decided to give up on Gotham, this season’s new Batman-origin-story drama on Fox. I watched since the beginning, but fell behind a few weeks ago. Finally, I bit the bullet: I deleted the remaining unwatched episodes off my DVR and took it off my recording schedule.

This is not an easy decision for me. It’s hard to finally, officially, give up on a show, especially one that is doing well in its freshman season. I like to know what happens and I like to keep up with what people are talking about. I also feel a weird sense of loyalty for shows—even shows I don’t really care for. Take Manhattan Love Story for example, the new ABC sitcom with the dubious honor of being the first cancelation of the fall. It was terrible, basing its humor on offensive stereotypes and tired clichés, and yet I continued to watch the following three episodes. I feel it’s unfair to base a show on one short episode, so I generally give it another shot to impress me. It’s an overblown sense of committing to a project.

I was interested to see Gotham at first—more than I expected to be with my current comic-book hero burnout. I thought the pilot was fine; not brilliant, but somewhat interesting. But as I watched later episodes, I realized that I was being irritated, not entertained, by the show.

Ever since The Sopranos ushered in the age of the anti-hero on television, it’s harder to find good people to root for. More programs are created around sketchy people doing not so pleasant things, and it’s harder to find characters on TV that I actually like. Don’t get me wrong, I still love a complex bad guy, like Dexter, but there has to be something redeeming about him. I had the same revelation recently with How to Get Away with Murder: I don’t like any of the characters. But I’m still getting some enjoyment out of it, mostly from Matt McGorry’s Asher.

Gotham has one good guy. Ben McKenzie plays Jim Gordon, a new police detective in an extremely corrupt precinct in Gotham, a city where crime is at an all-time high. He investigates when Bruce Wayne’s parents are murdered at the start of the series, and will become a mentor to Bruce as he eventually becomes Batman. In Gotham, there’s more of a mystery around why Bruce’s parents are murdered, but the show only starts to hint at that about four episodes in.

I suppose I should be happy that Gordon is a good guy, but it’s not enough. For one, that’s the only thing I like about him. But more importantly, he’s the only good guy, for miles. Most of the precinct is at best lazy, and at worst totally corrupt, and the city’s Mayor (Richard Kind) is also extremely suspect. The city is actually run by mob bosses, like Fish Mooney (fiercely overacted by Jada Pinkett Smith), Carmine Falcone (John Doman), and Sal Maroni (David Zayas, late of Dexter), who fight for control, and the police go to them for help instead of trying to take them down.

Gordon’s partner Harvey Bullock (Donal Logue) is not the worst of the bunch, but he’s pretty bad. He takes the easy way out and is much more interested in meeting quota and putting anyone behind bars than in finding the truth or fighting for justice. He also forces Gordon into “killing” Oswald Cobblepot (Robin Lord Taylor), the villain who will eventually become the Penguin, but since Gordon’s a Good Guy (TM), he only pretends to kill him. Now Cobblepot is back and emotionally blackmailing Gordon to keep his secret.

Gordon and Bullock frequently go up against the two detectives in the Major Crimes Unit, Renée Montoya and Crispus Allen (Victoria Cartagena and Andrew Stewart-Jones), who seem too hung up on trying to one up the other team than to actually work together on cases. I’ve not read the Batman comics myself, but I believe Gordon promotes Montoya to detective and she eventually joins him in fighting for peace. Here, she’s just another adversary, one who may even be trying to turn Gordon’s fiancé, the good woman behind the good man, against him. Barbara Kean (played by Erin Richards) is certainly hiding secrets from Gordon about her history with Montoya.

Even Alfred (Sean Pertwee), the butler and faux-father figure who cares for Bruce, does not seem like the best person. He’s supposed to be a kind soul, but he strikes me as particularly abusive to Bruce. He’s always yelling at him and chastising him, telling him not to do things in an emotionally abusive way. Yes, Bruce is a child who needs a father figure, but Alfred is not as kind and caring as in other Batman versions (in the films, at least).

Gordon appears to be the only person with anything resembling a conscience, and he works tirelessly to try to clean up the city, alone—all while maintaining an image that he’s also corrupt and working with the team. I’d think Bullock would have to come around eventually and start to see the benefit in the work he’s doing, but it hasn’t happened yet. Gordon cannot be the only good one. It’s just not possible for one person to have so much of an effect on a city by himself—especially without being Batman.

There’s no light to any of this. There’s no good side. I’m told the comics have more of a balance between light and dark, good and evil. There appears to be nothing to root for in Gotham, and with Gordon seemingly the only good one, yet forced to maintain a position of being a bad guy, there’s nothing that’s encouraging me to watch. Even the regular citizens of Gotham seem corrupt and hopeless. It’s true, we mostly see the police deal with criminals, so perhaps there are some good people in Gotham City, but we haven’t met them. There seems to be no hope at all for cleaning up the city. What’s more, without Batman, there’s nothing “super” about the show; it’s just a stylized gangster procedural.

I’ve also found the show frustrating and annoying, with very little humor. It’s campy in a comic-book way, but it’s not particularly funny, and a little comic relief goes a long way with me. Some of the situations are simply ridiculous (a problem in much of today’s television), and the characters make poor choices. Pinkett Smith chews the scenery every time she’s on screen.

I am sorry I stopped watching before Harvey Dent came to town. I enjoy the other work Nicholas D’Agosto has done, and he does appear to bring an interesting twist to the show, but when I know that he will eventually become Two-Face—just like Edward Nygma (Cory Michael Smith), who I like but we haven’t seen much of, will eventually become the Riddler, and Cobblepot the Penguin—I know it’s just going to get worse before it gets better. Talk about a race to the bottom.

I know none of what I’m saying is really new. This was a concern with people from the beginning: if Batman is the one (the only one, it would seem) to save Gotham from itself, but he’s not going to be around for at least another 10 to 15 years, then how can Gordon make any leeway, and therefore, what is redeemable about Gotham, the series? It’s become a self-fulfilling prophecy, for this viewer at least.

The basic fact of the matter is that there’s just not enough time in the day, and too many other options for things to watch. As more channels and more ways of watching or streaming television present itself (I still haven’t finished watching Netflix’s Orange is the New Black), the less time I have for shows I’m not really invested in. I need to clean some shows off my DVR, so I’m forcing myself to be even more choosy in the shows I spend my time on. Gotham just hasn’t grabbed me: it’s too joyless, and frankly too irritating, for me to want to spend more time on it. I am still curious to know what happens, but there are other shows that I’m much more invested in and actually get excited to watch (like Gracepoint).

I do like to keep up with what people are talking about, and I am concerned that I’ll miss something major that will become a huge talking point in the pop culture lexicon (as happened with Marvel’s Agents of S.H.I.E.L.D., which I’d also abandoned). Gotham is doing well this season, so it’s likely. But it got to be too much to keep up with and it wasn’t enjoyable. My poor DVR needs a break, and so do I.

What about you, readers? Are you watching Gotham, and do you enjoy it? Is there any hope for any of the characters? Which shows have you given up on this season?