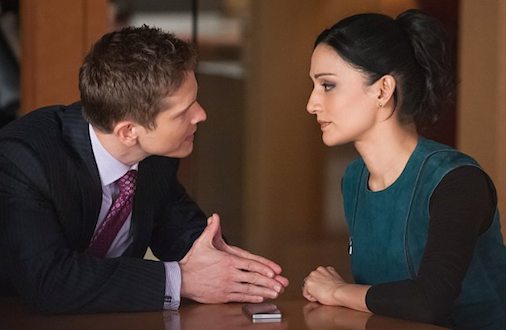 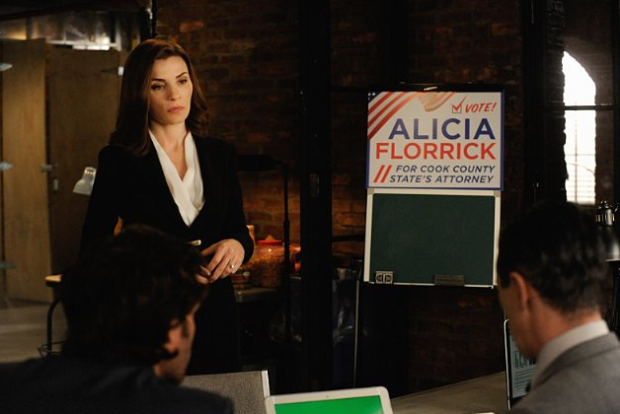 What an emotional episode, good-wifers! Tonight’s winter finale of “The Good Wife” has me feeling so many things right now. I’m sad from the result, frustrated by one of the plotlines, and amused by a few of the scenes. It’s quite the emotional roller coaster!

It’s finally time for Cary’s trial, and we see it progress through a few different points of view. Judge Cuesta (David Paymer) presides, and is grumpy and in a rush, trying to get Neil Diamond tickets for his anniversary. He also sounds like he should recuse himself from the case on the grounds that he’s made up his mind about Cary already. But no, he sticks around, and quickly fills the jury.

New DA on the case Geneva Pine is apparently dating the witness she calls to testify against Cary. Unfortunately for her but good for Cary, he reveals that he spoke to the informant recently, who admitted that he doctored the tape. Between this witness and Castro, who’s now annoyed with Pine because he thinks she cost him the trial, she’s got way too many slimy men in her life.

It turns out that juror number 11 could have been a little more honest during voir dire by disclosing that he sometimes has APD, Auditory Processing Disorder, which affects his ability to hear during stressful situations. The judge declares that he’s not able to serve—a huge blow to Cary’s case because he feels that Cary is innocent.

Cary sends Kalinda to help his case by finding Dante, the remaining assistant to Lemond Bishop, who was there during the wiretapping and could testify for Cary. After Alicia has a great moment with Finn (which I’ll get back to shortly), she “mysteriously” gets her hands on some photos of people entering or leaving Bishop’s house. Kalinda, not fully considering the consequences, goes to Bishop’s house and threatens him with child protective services, saying that she could use the photos to prove an unsafe environment for his son. That really does not seem like the brightest move, Kalinda. I’m starting to wonder if Kalinda will get killed off the show.

Turns out, it doesn’t help too much either. Kalinda does find Dante, but while he’s on the stand, Bishop enters the courtroom, immediately terrifying Dante into lying under oath and incriminating Cary. Cary knows he’s screwed.

Pine offers him a plea bargain of six months in prison—but only if he testifies against Bishop—or four years, out in two with good behavior. Cary refuses to testify, so he agrees to the plea and will now be going to jail for a long time. Bishop finds him after the trial, and offers to set him up in Barcelona as his personal legal consultant, but Cary turns him down.

So it’s a very sad outcome for Cary, and one that I don’t fully understand. At this point, I’m surprised Cary agrees to give up his freedom just for client loyalty. I’m not sure I would have, but maybe that’s just another reason I’m not a lawyer. I also don’t know why the jury is so convinced of his guilt, but perhaps I can’t see it because I know he’s not guilty.

Alicia has a little better luck with her day, though she has a somewhat bizarre fire to put out. Apparently she wrote a letter to Grace’s PE teacher because he badgered her about working out while she has a cold, but the letter is not very well written. Rather than using her own words, Alicia quotes that dopey crime show she watches, “Darkness at Noon” (which I keep wanting to call “Threat Level Midnight”), saying that she would stab the teacher with a knife and let him bleed out. She’s “clearly” joking, and Grace and her civics teacher both know that, but the teacher shows it to the principal anyway, getting Alicia in trouble.

Now Eli and Elfman are fielding calls about this situation, and trying to figure out how they can spin it—especially once Frank Prady goes on the record telling the press he would prosecute a similar threat made against a teacher. Alicia’s team retaliates against Frank by releasing a story that he had affairs with two different men. Frank insists that he didn’t know anything about Alicia’s situation when he made his statement to the press, but he also refuses to correct it. Eventually, the situation sorts itself out when Peter places the teacher and the principal on a safety commission, after Alicia refuses to give in to patronage. But as we suspected last week, Alicia and Frank’s people have already dragged the two SA candidates into the mud pit. I guess all bets are off now for a clean race. Shame.

I have a hard time with this storyline, as amusing as it may be. I find it very difficult to believe that Alicia would write a note like this, much less let Grace bring it to school with her. Alicia knows she needs to be careful, and that doesn’t seem particularly funny—but of course I’m not familiar with the context of “Darkness at Noon.” But kind of like the ransom malware episode, it’s difficult to invest myself in a storyline when I have trouble believing the basic premise: that Alicia (or Diane; or anyone) would be misguided enough to cause the problem in the first place.

The most fun tonight occurred between Finn and Alicia. The more I see them, the more I want them together, but their first conversation seems to nip that in the bud. Finn confronts Alicia and asks if they’re avoiding each other. She says no, but they should talk anyway. They admit they like each other “as friends” (Finn emphasizes that a little too strongly) and agree they should continue to meet in well-lit diners over pancakes, instead of at bars over drinks.

No, Filicia, that is not the right answer!

But it seems the fates agree with me, and conspire against their wishes. When Alicia meets Finn at a divey diner for help finding Dante, a storm knocks the power out. The waiter delivers a candle for the table, and a guitarist starts playing lovely, romantic music (not sure why that is, but OK). So here they are, at a romantic candlelight dinner of pancakes and bacon. Yay! I knew they wouldn’t let that relationship die just yet.

So Cary is off to jail, and Kalinda could be in bigger trouble with Bishop. Meanwhile, there’s likely not going to be another episode until January 4 so we’ll have to wait it out to see what happens next. I think I speak for all of us when I say, “wah!”

What do you think, good-wifers? Will Cary actually go to jail, or will they find some way to get him out? Will Kalinda be in serious trouble? What about Filicia? (or Finicia? Cast your votes now!) Will they ever come around and give in to their obvious desires? And what will you do without “The Good Wife” for the next six weeks? Chime in below.