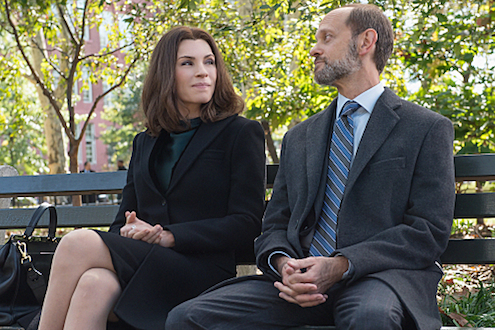 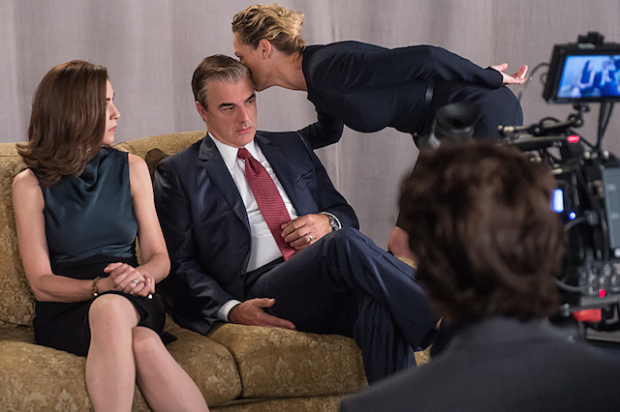 Goodness gracious, good-wifers! What fun! It’s an exciting, heat-filled episode of “The Good Wife,” as Alicia and Frank attempt to run clean campaigns, Alicia and Finn try to ignore their obvious sexual tension, and poor Cary is in fear for his life!

Alicia’s campaign manager Johnny Elfman now works with a director, Josh Mariner, (the always entertaining David Krumholtz), who’s a bit of a jerk. They’re making campaign ads for Alicia, and ask her to set up a time with Peter for a joint interview, to hopefully prevent any questions about their marriage. They also want Alicia to talk to the camera about Will’s death. It’s clearly a compelling story and the primary reason she decided to run, but it’s so gut wrenching to bring it up again. My heart is breaking all over again; I’m still not sure I’ll ever get over it. The team has to walk a very careful line with that video to make sure it’s not too crass. It’s not going terribly well.

Elfman and Mariner also make a ridiculously silly JibJab-style attack ad against Alicia’s opponent, Frank Prady (David Hyde Pierce), implying that he’s a closeted homosexual and a DINO-saur: Democrat In Name Only. Alicia points out that the ad is stupid, and Elfman agrees, saying it’s intentionally stupid because it’ll have a better chance of going viral. That’s a pretty sad state of affairs.

Almost presciently, Frank shows up at Alicia’s office with a small blue shoebox. He gives it to her, explaining that it’s oppo research on Alicia that Castro gave him to use against her. But he doesn’t want to use it. He thinks he can win with a fair fight. I absolutely respect that. I’ve always liked “Project Runway” better when the competitors help each other out. Alicia is reluctant but agrees, taking the box and Frank’s private phone number.

After battling with herself a while, she gives in and opens the box. An envelope of pictures contains that heavily circulated picture of Finn leaving Alicia’s apartment, which Alicia smirks at, a picture of her with Will (aww!), and several new pictures—implying that Peter may be having another affair, this time with his new attorney and Alicia’s Mini Me, Ramona.

Really Peter? Are you really that stupid, and that much of a cliché? Apparently. How sad for Alicia. Or should she be flattered at just how much Ramona is following in her footsteps? At least Ramona’s more age appropriate for Peter than her daughter, so that’s an extremely small comfort. But still, give me a break.

Alicia eventually confronts Peter—but not until after she visits Finn in his office. Oh my goodness, my little shipping heart is beating wildly! She’s so awkward, alone at night with Finn in his office—similar to her first intimate moment with Will—trying not to say anything even though she wants to. The tension is palpable, and he wants to be there for her, or more, but she refuses to open up. It’s so clear she wants to tell him about Peter, despite her lies (“I just wanted to see how you were doing,” she tells him), but she won’t let herself. She needs to be careful because of her campaign. Sitting on the couch together, they have a moment and Finn puts his hand on Alicia’s hand. When two of his coworkers walk by, he pulls away, and she takes that as time to escape. She walks out without a word.

Finn asks her about it in her office the next day, and they share a surprisingly heated, cryptic moment. Oh my goodness! I’ll never get over Will’s death, but I’m so excited to see these two together. There’s a lot of similarity between the two relationships, not just their names.

Alicia finally tells Peter to stop sleeping with Ramona. Naturally, he denies it, but Alicia insists that he tell her the truth. She’s angry but doesn’t care, except for the fact that he’s being careless. He’s been seen, and he knows it’s just as bad for his eventual reelection campaign as it is for her State’s Attorney race. She warns him that she refuses to stand by him again, if it becomes public. Good for you, Alicia.

His denial is a lie, of course, because we later see Peter breaking up with Ramona in his car. She’s crying, and clearly neither of them is happy about it. How awkward. I know we don’t know much about Ramona, but I’d have thought she was smarter than this too. I’m sorry to see her so upset over losing him, though perhaps she’s more upset about the job, which she feels she should resign.

The back and forth between Alicia’s people and Frank’s people continue, as Frank releases a video with his mother wearing the same dress Alicia was wearing in one of her spots (the same dress she wears on the season 5 DVD box cover). Clearly they can’t have that, though I honestly didn’t notice it was the same dress until they pointed it out. Alicia tries to film her part again, but it’s just not working. They keep the video of her in the same dress.

Despite Alicia and Frank trying hard to keep their campaigns clean, their people go around them and show negative Internet ads anyway. Frank’s PAC strikes first with an ad implying that Alicia’s in bed with her nefarious clients, like Colin Sweeney and Lemond Bishop. Alicia refuses to let Elfman show the ridiculous Dino ad, but somehow it leaks and gets out there anyway. Alicia and Frank agree they will continue to resist, despite what their mud-slinging campaign people do.

Speaking of Lemond Bishop, he is causing more trouble for Cary, whether deliberately or not. Kalinda’s good buddy Lana Delaney at the FBI gives her boss a wiretap recording of Bishop talking to one of his men about having Cary killed. They play it for Cary and Diane in the hopes that Cary will help them build a case against Bishop. Cary refuses to turn on his questionable client, and thinks that the tape is a fake. Diane hires a bodyguard for Cary, just in case.

Kalinda gets a copy of the tape from Lana—who wants her to take their relationship more seriously. She says she does, but I for one have trouble believing anything Kalinda says when it comes to relationships. Kalinda works on figuring out if the tape is real, and it turns out, it is. Cary feels the bodyguard’s presence is just making his relationship with Bishop more strained, and goes to talk to him. He assures Bishop that he’s not going to turn on him. Bishop admits that he did talk about killing Cary on the tape, but he didn’t mean it. He just talks a lot. Oh, OK, thanks for that vote of confidence.

Looks like Cary’s off the hook for now, but it was a scary few days for him. But judging by the promo for next week, it looks like his time may be running out.

So what do you think, good-wifers? Will Alicia and Frank be able to resist their teams dragging them through the mud? What do you think that disc labeled “Fifth Wheel” is about, and will we find out? Will Peter be able to keep it in his pants and stay away from Ramona? Will Alicia allow herself to take any chances with Finn? Let me know your thoughts below.