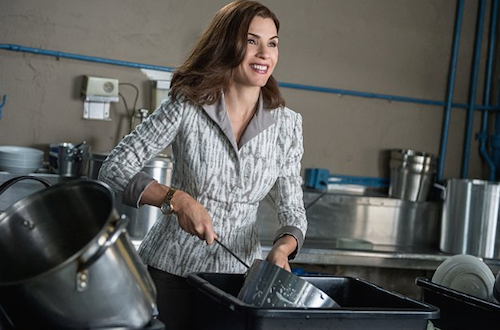 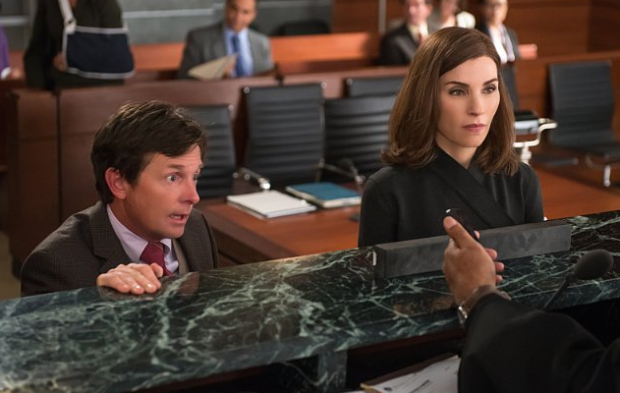 Hey good-wifers, it’s another great episode as Alicia and Cary both try to work on their appearances, and Kalinda tries to show Bishop that she’s on his side. As is frequently the lesson on “The Good Wife,” who you appear to be is more important than who you actually are.

The episode begins with Johnny Elfman conducting a focus group, a week-long one, apparently, asking people what they think of Alicia and whether they’d vote for her. They’re fairly evenly split between Alicia and Frank Prady, but there’s one woman who doesn’t like Alicia, partially because she stood with Peter instead of standing up for herself. She also thinks that Alicia seems entitled and selfish.

Alicia fixates on this woman, and immediately tries to find something that will prove her selflessness. Over a bottle of wine at his new office in the Florrick-Agos-Lockhart building, Finn suggests that Alicia volunteer with him at a soup kitchen. She agrees, but because she comes straight from court, she appears overdressed, and is relegated to the back washing pots. Someone snaps a photo of her washing what they think is an already clean pot. It’s a PR disaster.

Eli comes to the rescue, planning a proper photo op at the kitchen with Alicia actually serving food, and offering to help people with their housing applications. Clearly, Eli proves that he’s very good at his job, and despite Alicia’s intentions, she can’t just plan these things herself.

I’d think it would be impossible for anything not to seem like a photo op; like she’s only doing it to change her image—which is ultimately what she’s doing. In Alicia’s case, she really does care about the people, which is why she’s so disappointed when the focus group woman thinks she’s entitled. I cannot imagine being in Alicia’s position, where people freely scrutinize your every move. It’s one of the reasons I’m no longer a performer.

Despite telling Eli she is cutting back on her caseload, Alicia takes on another case: a student of her brother Owen was raped on campus, and Owen asks Alicia to sit in on her disciplinary session at the university. The student, Jody (Madeleine Martin), simply wants her assaulter expelled. After an apparently longer than usual session, where the panel doesn’t follow the rules in their own handbook and clearly gives the male student the benefit of doubt, they try to dismiss the case because of lack of evidence. But Alicia has none of it, and accuses them of lack of due process. Alicia convinces Jody to sue the school, and Louis Canning, now in a wheelchair and frequently drawing breath from an oxygen mask, represents the school.

Considering how frequently rape cases, particularly on college campuses, have been in the news recently, and how unfairly the schools treat the victim, this is an exciting case for “The Good Wife” to take on.

It doesn’t end much better for the show than it does in real life, despite some fortunate plot points that help them on their way. The student does achieve her initial goal: her assaulter is expelled—but not because of the rape. A “random” search of his dorm room uncovers marijuana. Alicia tries to push forward with a class action suit against the school when Kalinda finds a (rather convenient) “rape wall” on campus, where about 60 other female students wrote the names of their attackers. Sadly, Jody declines. She’s already been through so much and she just wants to put it behind her. Such a shame not to pursue the actual wrong doers, and I’m a little surprised Alicia doesn’t try to talk her into it, but I know this kind of situation happens all the time. It’s a comment on how difficult it is for women who are attacked to press charges.

Like Alicia, Cary also needs to fix his appearance, or his potential appearance, in the courtroom. He, Diane, and Rita Wilson’s Viola Walsh have a practice deposition, with Howard Lyman (Jerry Adler) presiding as faux judge. Cary is proving what Diane and Alicia say, that lawyers make the worst witnesses, because he’s allowing his indignation and anger to get the better of him. He’s belligerent on the stand, and buries himself in deeper. Alicia advises him of this, and warns him that he appears entitled (there’s that word again). This sinks in, and he takes a different, much better approach to his testimony. We don’t see much of it, but I imagine we will in the weeks to come.

To paraphrase Shakespeare, what a piece of work is Kalinda! She’s up to her old tricks again, but she’s not quite getting away with it this time. She’s again (still?) sleeping with Federal Agent Lana Delaney (Jill Flint), and lying to Cary about it. Her good buddy Lemond Bishop learns about it too, and coerces Kalinda into spying on her lover to find out if she’s trying to prosecute him. Kalinda ignores a phone call from Cary in order to eavesdrop on Lana and learns that she is persecuting Bishop, but Kalinda lies to him and says he’s in the clear. Bishop insists if that’s true, then Kalinda should help him by putting a small white plastic card into Lana’s wallet.

What exactly is that? A bug? Something worse? Something dangerous? Bishop is clearly not to be trusted. Kalinda is about to fulfill Bishop’s wish, but she changes her mind and snaps the white card in half (and it fortunately doesn’t explode). This is clearly going to become a much bigger problem for Kalinda in the future. Could it perhaps lead to her eventual departure from the world of “The Good Wife?”

Bishop isn’t the only one causing problems for Kalinda. Cary breaks the 30-foot restriction against Kalinda and confronts her at her apartment: he saw her kissing Lana. He tells Kalinda he knows they’re not monogamous, but she’s the only one he wants to be with. (Oh really? What happened to the chicky you took home from the Harvard mixer?) He asks Kalinda to stop seeing Lana, but she refuses, so they break up. Actually, he tells her “Thank you, and go to hell.” Whoa. Finally. I knew it was coming, and while I feel badly saying I’m happy about it, I am.

So what do you think, good-wifers? Are you also happy that Kalinda and Cary finally split? Do you think Alicia’s done enough to save her image? How much of a threat will Prady be, especially now that Castro has quickly and conveniently dropped out of the SA race? How soon will we get to some smoochings between Finn and Alicia? Spin your theories below.