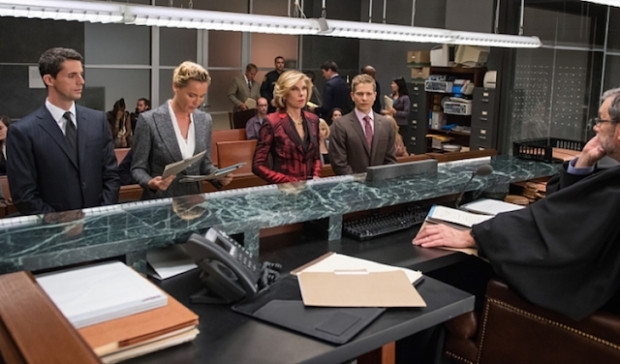 Whoa boy, good-wifers! “The Good Wife” is back on top again with this super exciting episode. There’s no case du jour to distract us from all the juicy stuff happening to our favorite people as Cary gets in even deeper hot water, and Alicia faces some pretty tough competition in the state’s attorney race.

We continue again from where we left off last week, with the new restrictions on Cary’s parole. Finn requests an extension before trial so that he can find his missing witness, Trey Wagner (Samuel Smith), the employee of Lemond Bishop who wore the wire that recorded Cary’s supposed guilt, and who took off out of fear. The hot-tempered judge (John Procaccino) denies Finn’s extension, sending him back to investigate Cary further.

Finn gets more ammo from Cary’s former coworker Geneva Pine (Renée Elise Goldsberry, who we haven’t seen in a while). Finn eventually returns to the snippy judge with another crimes charge, accusing Cary of burying evidence and working for Lemond Bishop while serving as a Deputy ASA. It seems Cary had removed some evidence that then went missing in one of Bishop’s cases: two kilos of cocaine.

A damning testimony from a police officer says that Cary insisted on taking over Lemond’s cases when he became Deputy ASA. He says Cary asked to take the cocaine to the lab personally, off the books, so that he could link the cocaine to Bishop and expedite the charges against him, but the case disappeared along with the cocaine.

Oh boy, Cary’s in some deep doo-doo. So far everything seems like the evidence against Cary is real, but clearly he’s leaving out something crucial. Kalinda thinks Cary is protecting Peter, who was eyeing the governorship at the time and knew that winning a big case would help his campaign (an interesting juxtaposition with what Alicia’s going through now). Still keeping with the 30-foot restraining order, Kalinda tries to convince Cary by phone to say he was under orders from Peter, but Cary refuses because he knows it’ll be serious trouble for Peter. Kalinda insists, and goes over Cary’s head.

Peter is served with a subpoena, but it’s a perfect opportunity for his new personal attorney, Ramona Lytton (Connie Nielsen), his former intern’s mom, to prove that despite her nerves and Eli’s disapproval (Eli can be quite a jerk when he wants to be), she really does know her stuff. She serves up a perfect rebuttal to the subpoena and gets it quashed, all on her first day back to work after 12 years of raising a family. She’s like Alicia’s Mini Me.

With Finn’s new evidence against Cary, Kalinda steps up her search to prove Cary’s innocence, and finds that a worker at the crime lab had received $30,000 in her bank account six months ago. Apparently, the woman’s cousin knew at the time that those two kilos of cocaine were coming through there and wanted them back for Bishop. She doesn’t know where he is now though, because he took off out of fear of Bishop. Yes, the woman’s cousin is Trey Wagner.

After some illegal detective work—breaking into the woman’s car to read her recent GPS searches—Kalinda finds Trey Wagner and somehow convinces him to do the right thing and testify, not against Cary, but against Bishop. When Finn tells Castro the good news, thinking Castro will be happy to take down a major player like Bishop, he instead finds that Castro doesn’t want Bishop. He wants to continue persecuting Cary to make life difficult for Alicia. Finn stands up to Castro and apparently loses his job, or quits, and tells Alicia of Castro’s plan. Good for him.

I love the growing friendship between Finn and Alicia. He’s definitely not going to replace Will, but I do love to have at least the possibility of romance in my shows (and he touched her arm when looking at her watch! Sparks!). And with Alicia now offering Finn office space in her new-old building, they may be in closer contact with each other. The trick is they have to walk a delicate line of being open, trusting friends while working on opposite sides and keeping their information confidential. It’s a fascinating dance.

The problem, however, is that Cary’s not out of the woods yet: Diane learns that Wagner and his cousin were both killed in a car accident. Accident? Really? I’m not so sure. It’s pretty shady. Could Lemond have been behind it? If so, that was pretty easy. Or could Castro have something to do with it? Could Castro really be that evil? Either way, it again brings up the question of why Florrick-Agos-Lockhart would still want Bishop as a client if he can so easily kill those who get in his way. But we’re jumping the gun; we really don’t know yet if it wasn’t an accident.

What’s also fascinating is Alicia’s preparation for her interview with the political pundit Frank Prady (the always wonderful David Hyde Pierce). We meet Frank while he’s interviewing Peter for his television show, where Eli sees a colleague who does petition bundling. Eli quickly suspects that Frank is joining the race for SA. Uh-oh, that could be trouble for Alicia.

On Eli and Johnny Elfman’s recommendation, Alicia asks Frank if he’ll consider endorsing her, and they agree to do an interview on his show. Elfman preps Alicia for totally hardball questions, including allegations that Peter had an affair with his intern, and about her son’s involvement in his girlfriend’s abortion. Alicia enters the interview totally on the defensive, bracing herself for the worst, so when Frank actually asks friendly, softball questions like where does she find the time (something I’ve been wondering myself), and how does she relate to her family, she doesn’t know how to respond. She completely bombs the interview, and is mortified by the experience.

Poor woman! She’s so out of her element here that she’s putting all her trust in her campaign managers, Eli and Johnny (I thought Eli didn’t have enough time), and it’s not going to end well.

The men look for dirt on Frank so they can hurt his campaign and scare him out of running. They find a Palestine-sympathizing paper he wrote many years ago, and want to use it against him, but Alicia refuses to let them (I’m surprised she agreed to let them look for dirt on him in the first place). They agree, but it ends up on the news anyway, through Castro. Did Johnny actually give Castro the paper? He says he didn’t, but Frank seems to think so. Frank goes to Alicia to explain that he wasn’t planning to run against her for SA, despite Eli’s petitioning colleague trying to persuade him to, but he decided to run when he learned that Alicia’s people gave Castro his old paper.

If Frank hates the political game, with “campaigns being treated like bad reality shows,” then why would he want to be a part of it? He seems to be using the same platform Alicia is running on, but somehow her advisors did the opposite of what she’d want, and ended up making her look bad in the process. Not good. But it’s interesting, and sad, to see her flailing and out of control. She’s always so put together. I’m sure she’ll get back on track, but she’s clearly out of her depth at the moment. Fascinating.

So what do you think, good-wifers? How much of a threat will Frank be to Alicia’s campaign? Do you think Lemond or Castro had anything to do with Wagner’s death? How soon will it be before we see some real fireworks between Alicia and Finn? Chime in below.