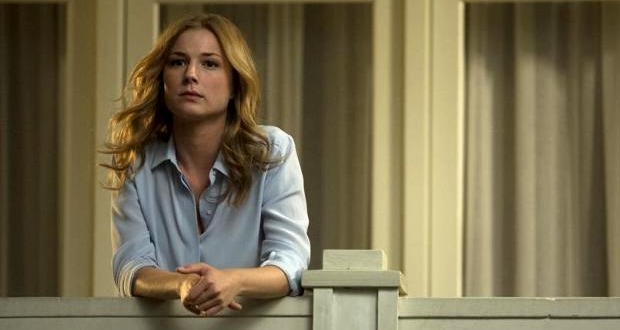 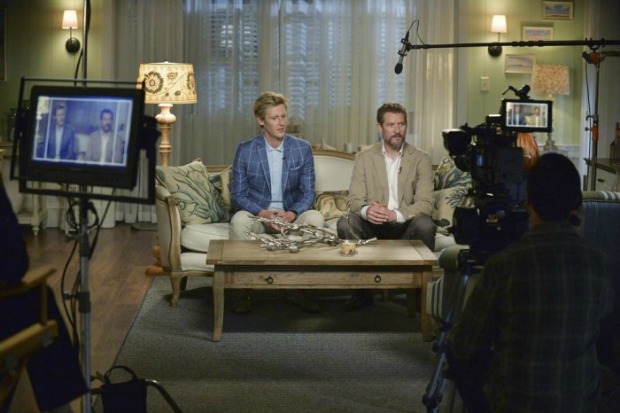 Sorry this is late getting out. I’ve been swamped – I need to be three people – maybe I should be cloned. Actually, that’s an enormous can of worms to open — for a non-entertainment website! I’m staying away from that one! It’s something Victoria might be interested in, though, right?

“Damage” — that’s a fitting name for this episode of “Revenge.” Nolan was so flattered that David asked him to appear on the interview with him – until David turned on him, publicly humiliating him and damaging his name. He accused Nolan of stealing hundreds of millions of dollars that was to go to Amanda, on the air! Nolan was clearly shocked and hurt, then bolted – to Victoria’s delight. Dang it, why do things seem to go in her favor? It drives me crazy – and it’s suppose to, I guess.

Can you believe that Charlotte called Emily to help her? It seemed a little odd because of the great loathing she seems to have for Ems… but I guess she thought Emily would know how to clean up a murder scene. Lol. That guy was bad and she was only defending herself. I’m glad Emily set Charlotte straight about never killing anyone – and telling her that Victoria is the one who killed Aiden. That took Charlotte by surprise, or did it? I think she knows what her mom is capable of. And thank goodness she has decided to check herself into rehab! We’ll see what happens with that.

Poor Nolan, David wasn’t finished. He showed up at Nolan’s place questioning him about the money and Amanda, then with a quick right, punched him in the nose. Emily, you have to confront David before Nolan really gets hurt! Nolan is such a faithful friend to Ems. He has done everything to help her, which includes counselling her – but that hasn’t helped yet. I really hope things work out for him and he finishes on top. As goofy and eccentric as he can be, he’s a good guy – like Jack.

Speaking of Jack, he’s been keeping close tabs on his partner (Ben), who I haven’t trusted, but now I think he’s probably a “good guy.” Jack is just fearful he’ll figure Emily out before she is able to finish her job – which now seems to be figuring out what her dad has been up to.

Yes, Emily did some research (she never gets caught, does she?) and is now questioning whether David was really held captive for ten years. What? At the building where he was supposedly held, she found that his bed frame didn’t have any rust on it – while standing in a lot of water! There’s also a photo of him with the date not adding up. Hum. She told Nolan, and now they both wonder if he’s in on some huge secret. I’m trying to figure out what it could be. Any theories?

Oh gosh, I need to mention crazy Louise. She is a nut, isn’t she? She has failed to get her grips into Daniel and/or Victoria. After daydreaming about Victoria becoming close with her, Vicky crushed her dream when she told Louise that she won’t be seeing her anymore – basically telling Louise that she is crazy. Well, on to the next prey then – Margaux. I’m pretty sure Margaux will figure out miss loonie-toon fast enough to say to her, “Don’t let the door hit you in the —!”

The show-runners are teasing that next week Emily/Amanda and David will meet (I thought it was going to be this week). I think they will meet, BUT, will she tell him who she is? I’m dying to know what the writers have planned for us!