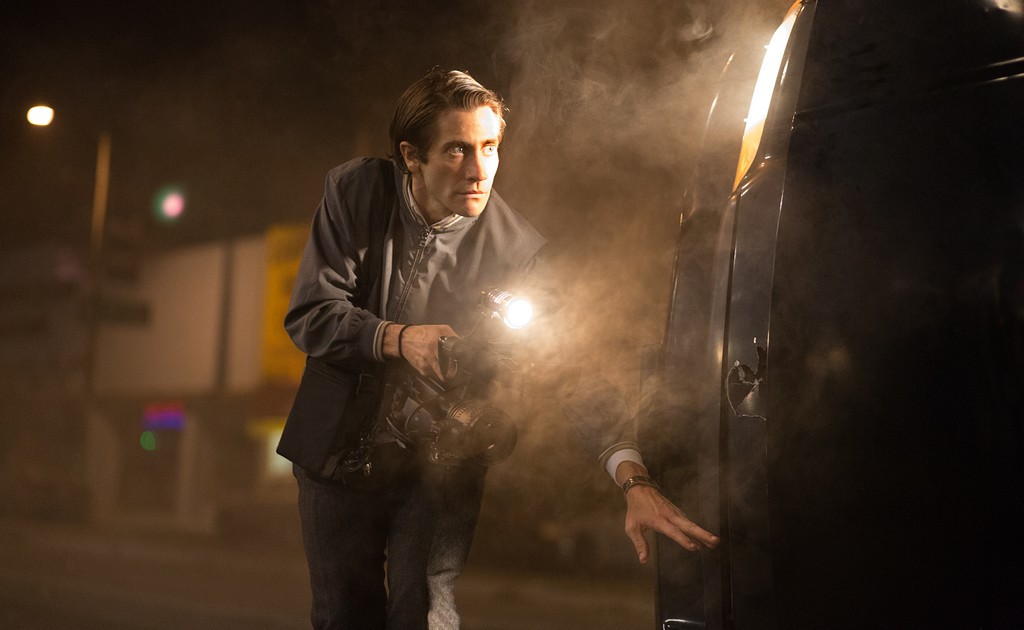 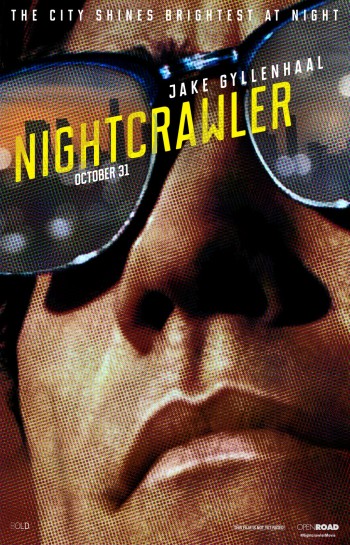 SYNOPSIS: Jake Gyllenhaal plays Lou Bloom, a driven man who’s desperate for work. When he muscles into the world of L.A. crime journalism, he blurs the line between observer and participant to become the star of his own story.

REVIEW: I feel like I really need Lou Bloom to negotiate my business dealings for me. He knows exactly what he wants, he clearly spells out what he wants, and he doesn’t stop until he gets what he wants. On the other hand, he doesn’t necessarily play by the rules. Sometimes he bends the law. And sometimes people die. On second thought, I’ll just stick with my own negotiating tactics for now. But Lou sure is fun to watch on the big screen.

Jake Gyllenhaal plays this master negotiator, a driven, determined outcast who makes his living stealing and selling scrap metal. One night while on the prowl, Lou stumbles upon Joe Loder (Bill Paxton), whose career is just a notch above thievery. Joe is a “nightcrawler,” a freelance cameraman in search of news footage during the night hours in Los Angeles. The bloodier the footage, the better.

So Lou negotiates his way into a camcorder and, using knowledge gleaned from the Internet and his own spectacular sales skills, he manages to sell some footage to a struggling L.A. TV news program run by Nina Romina (Rene Russo), who desperately needs it to increase her ratings. Everyone is desperate in this movie.

As Lou’s business grows, he hires an assistant, Rick (Riz Ahmed), and starts to realize that his footage could be even better if he manipulates the settings and characters — even if that means people are going to die.

I really hope the people at TMZ and other shock journalism sites don’t see this movie and try to emulate Lou’s career tactics. This sort of seamy, gossipy news seems to be the thing these days, and websites will do whatever it takes to get more pageviews and ad revenue.

On the other hand, it makes for a great movie full of edgy streets, high-speed thrills, and camcorders focused on the very worst of L.A.’s nocturnal scene. Screenwriter Dan Gilroy (filmmaker Tony Gilroy’s brother) makes his directorial debut with “Nightcrawler,” and he dives head first into the cut-throat world of TV news where “if it bleeds, it leads.”

I love everything about this movie, partly because I’m in the media business and crave any movie, book or TV show focused on the business. But also because Gyllenhaal is so darn riveting to watch. He’s gaunt, severe and callous, and his eyes are so intense that you feel like they could kill you if you stare at them long enough.

From the beginning, you don’t know where this movie is going and you don’t care, because by the time you finally find out, like Lou Bloom, you’re invested in the ride. There’s not one second of wasted space in this movie, and even though it’s violent, Gyllenhaal is so fascinating to watch that you don’t realize how violent it is until it’s over and you’re sitting in the theater going, what did I just see?

“Nightcrawler” is definitely going on my “Best of 2014” list.

Sex/Nudity: A character negotiates a business deal with a woman; sex in exchange for crime footage (nothing is shown onscreen, though).

Violence/Gore: Lots of violence is caught on camera, including shootings, dead and bloodied bodies, chase scenes and car crashes. A character beats up a security guard and steals his watch. Dead bodies are dragged and positioned to make for better camera shots.

Which Kids Will Like It? Kids 17 and older who like edgy crime dramas, Jake Gyllenhaal, or movies about shock journalism.

Will Grownups Like It? “Nightcrawler” is one of those movies that sucks you right in from beginning to end.

Images in this review used courtesy of Open Road Films.