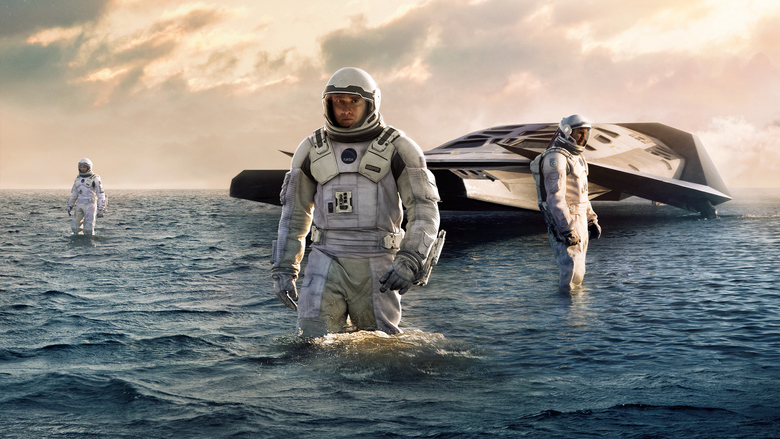 SYNOPSIS: As Earth nears the end of its life, a group of explorers use a newly discovered wormhole to explore other galaxies capable of sustaining life. 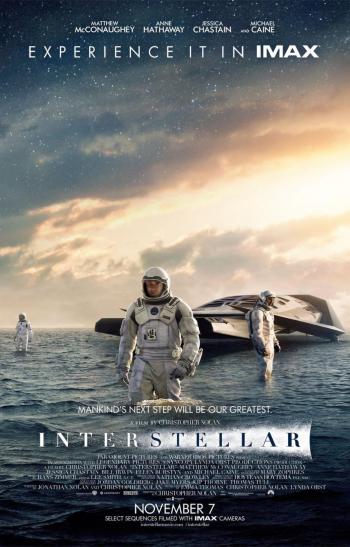 REVIEW: I’m not sure when Matthew McConaughey morphed from actor to icon, but somewhere between 1993’s “Dazed and Confused” and 2013’s “Dallas Buyers Club,” for which he won an Oscar and uttered that now infamous catch-phrase “Alright, alright, alright” in his acceptance speech, we started paying attention.

Now his voice is so revered that he can take any line, whether he’s chatting with a bull named Cyrus in a Lincoln commercial or McConauloguing his way through a scene in HBO’s “True Detective,”  and make it seem like one of the secret truths of the universe.

He does a lot of that in “Interstellar.” “We’ll find a way … we always do…” is just one of the many lines that help to calm the frantic voices in our head pondering whether Earth is actually dying a slow death. Yes, we WILL find a way, because that’s what we do. Next up: Matthew McConaughey Meditation Tapes.

“Interstellar” takes place in a future where severe drought has annihilated most of the world’s crops, leaving people to die of starvation on a desolate planet. Cooper (McConaughey) is a former pilot/engineer who, like many others, was forced to trade in his now-defunct career for life as a farmer.

Now a widower, he lives in a dust-covered house in the middle of a cornfield with his son, Tom (Timothee Chalamet), father-in-law Donald (John Lithgow), and daughter Murphy (Mackenzie Foy), who loves science as much as her dad. When she tells him there’s a ghost in her bedroom leaving coded messages, Cooper doesn’t believe it at first. But together, they decipher one of the codes, which leads them to a secret lab run by Professor Brand (Michael Caine) and his pilot daughter Amelia (Anne Hathaway). It’s what’s left of NASA.

Brand reveals that they’ve sent a group of scientists through a wormhole leading to another galaxy. Now he wants Cooper and a small team to embark on a mission to see if any of those scientists are still alive — and whether they’ve found any planets where earthlings could live.

Cooper is understandably torn between wanting to get back in the space exploration game and stay on earth to take care of his family. There’s no guarantee of how long he’ll be gone, but one thing’s for sure: If he doesn’t go, his kids may be the last generation to survive on planet Earth.

As the team, including Amelia, physicist Romilly (David Gyasi), geographer Doyle (Wes Bentley) and robots TARS (Bill Irwin) and CASE (Josh Stewart), venture into space, Murphy grows into a brilliant scientist (Jessica Chastain, whose resemblance to Foy is uncanny) obsessed with finding her father, who, essentially, is now lost in space. Meanwhile, Tom (played as a grownup by Casey Affleck) is married and continues to run the farm.

There’s a lot of geeky science woven into the plot of “Interstellar,” and I’m not even going to pretend I know the ins and outs of wormholes and black holes. But it’s still really cool to think about space travel, isn’t it? And the idea that one hour on a distant planet could translate to years and years of time passing on Earth.

I think that most people are still fascinated by interstellar travel, and director Christopher Nolan and his brother Jonathan (who co-wrote the film) take us on a visually spectacular journey from the scorched earth to the far reaches of space. There’s a lot riding on this trip, but McConaughey is a master of blending drama with lively banter. It’s especially fun when he gets into it with TARS, whose humor and sarcasm can be regulated with a digital flip of the switch.

The film is perfectly cast, including Caine, whose scholarly professor has a penchant for quoting Dylan Thomas’ poem “Do Not Go Gentle Into That Good Night,” and provides the same elder-statesman vibe he had as Alfred in Nolan’s trilogy “Batman Begins,” “The Dark Knight,” and “The Dark Knight Rises.”

There’s a bit of a disjointed shift between the beginning and the end of “Interstellar.” It starts out as “Gravity” and ends up as “2001: A Space Odyssey.” But as Hathaway’s character opines, love is a force that transcends time and space, so if you’re pulling for Cooper to hug his children again, you’ll forgive any inconsistencies and just enjoy the ride. After all, there’s more to this big universe than we could possibly imagine.

Sex/Nudity: Two adults kiss. A character references a relationship with someone.

Violence/Gore: Perilous scenes involve space travel, an explosion in space, a dusty earth (people wear masks), a deadly wave of water, and a dangerous confrontation between two men. Several characters die and some are presumed missing.

Will Grownups Like It? With a compelling story, great visual effects, and stellar performances, “Interstellar” is one of the better sci-fi movies.

Images in this review used courtesy of Paramount Pictures.