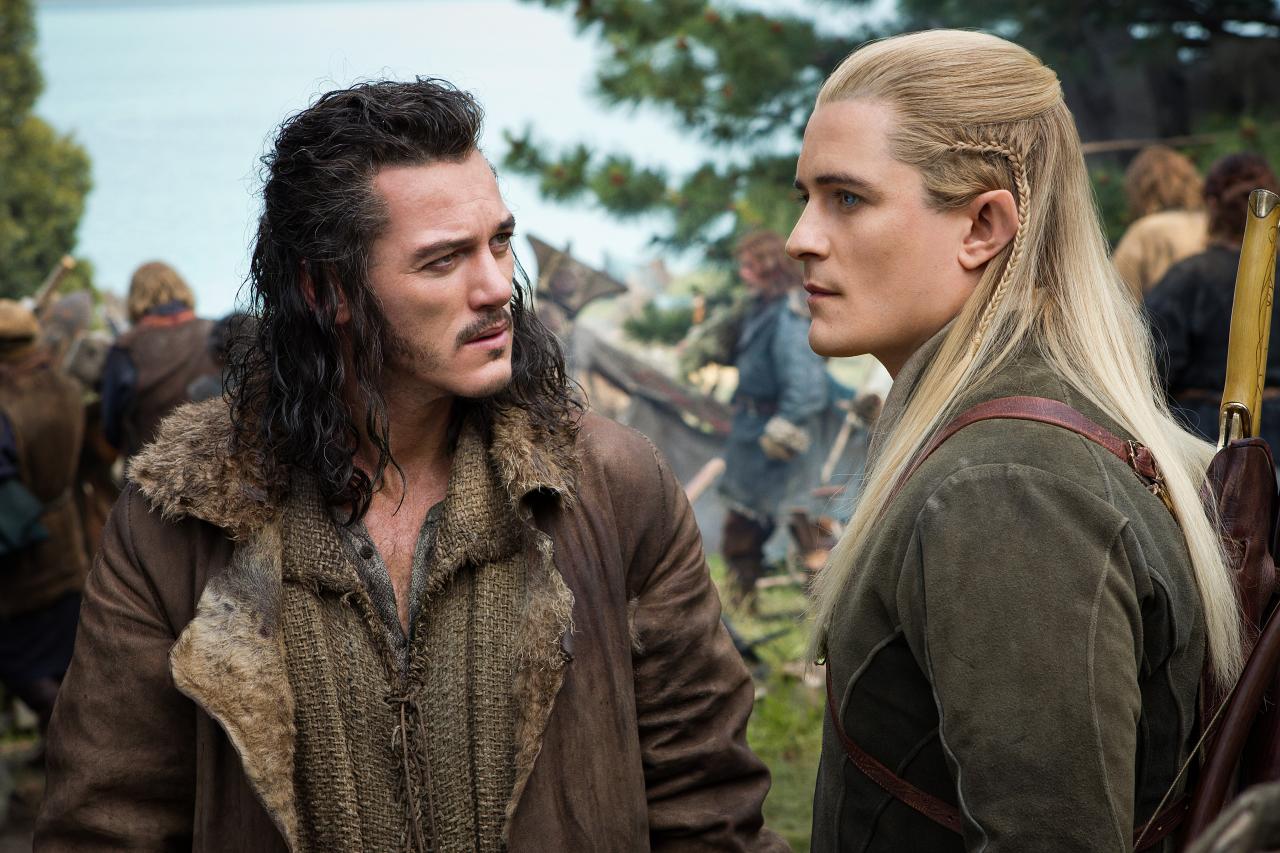 It’s the most! wonderful tiiimmmme of the year! You can hear Andy Williams singing that, right? I love the holidays, not only because of the fun gatherings and festive decorations, but also because that’s when the best movies hit theaters.

This year, there’s something for everyone, from Katniss and her powerful archery skills in “The Hunger Games: Mockingjay, Part 1” to adorable penguins in “Penguins of Madagascar.” And let’s not forget “OneLastTime for “The Hobbit: The Battle of the Five Armies” (that’s the hashtag they’re using on Twitter).

Here’s the buzz on all the holiday releases.

From Walt Disney Animation Studios and the team behind “Frozen” and “Wreck-It Ralph” comes this action-packed comedy-adventure about the special bond between Baymax (voiced by Scott Adsit), a plus-sized inflatable robot, and prodigy Hiro Hamada (Ryan Potter).

When a devastating event befalls the city of San Fransokyo and catapults Hiro into the midst of danger, he turns to Baymax and friends — adrenaline junkie Go Go Tomago (Jamie Chung), neatnik Wasabi (Damon Wayans Jr.), chemistry whiz Honey Lemon (Genesis Rodriguez) and fanboy Fred (T.J. Miller). Determined to uncover the mystery, Hiro transforms his friends into a band of high-tech heroes called “Big Hero 6.” Directed by Don Hall and Chris Williams, this movie includes some death and grief issues, which is why I recommend it for kids 7 and older.

With our time on Earth coming to an end, a team of explorers undertakes the most important mission in human history: traveling through a wormhole beyond this galaxy to discover whether mankind has a future among the stars.

THE THEORY OF EVERYTHING

PG-13 for some thematic elements and suggestive material | In Theaters 11/07 | Ok for Kids 13+ | Focus Features | Reel Preview: 5 of 5 Reels | The Theory of Everything | Facebook

With Jane fighting tirelessly by his side, Stephen embarks on his most ambitious scientific work, studying the very thing he now has precious little of – time. Together, they defy impossible odds to break new ground in medicine and science. Directed by James Marsh (“Man on Wire”), this film is based on Jane Hawking’s memoir, “Travelling to Infinity: My Life with Stephen.”

Drawn to each other, Noni and Kaz fall in love, despite the protests of others who urge them to put their career ambitions ahead of romance. But ultimately, Kaz’s love gives Noni the courage to find her own voice and follow her own dreams. Directed and written by Gina Prince-Bythewood, this movie also stars Minnie Driver, Aml Ameen, Danny Glover and Aisha Hinds. Read Paula Schwartz’ report from the red carpet of the New York premiere. Love this movie.

Yes, it’s been 20 years since that first movie. Now the dimwits are on the road in search of one of their long lost children in the hope of gaining a new kidney.  Directed by Peter and Bobby Farrelly, this movie also stars Kathleen Turner, Laurie Holden, Rob Riggle and Paul Blackthorne. I love Carrey and Daniels, but alas, this movie doesn’t deliver. Maybe a new franchise, guys?

The worldwide phenomenon of “The Hunger Games” continues to set the world on fire with “The Hunger Games: Mockingjay – Part 1,” which finds Katniss Everdeen (Jennifer Lawrence) in District 13 after shattering the games forever. Under the leadership of President Coin (Julianne Moore) and the advice of trusted friends, Katniss spreads her wings as she fights to save Peeta (Josh Hutcherson) and a nation moved by her courage.

Directed by Francis Lawrence from a screenplay by Danny Strong and Peter Craig, this movie is based on the third novel in a trilogy written by Suzanne Collins. I’ve read all the books and love these movies. Jennifer Lawrence is the perfect Katniss.

Those crazy penguins are back! And involved in a spy caper! Yes, now we can discover the secrets of the most entertaining and mysterious birds in the global espionage game. Skipper, Kowalski, Rico and Private must join forces with the chic spy organization, the North Wind, led by Agent Classified (I could tell you his name, but then … you know), voiced by Benedict Cumberbatch (yes!) to stop the villainous Dr. Octavius Brine (John Malkovich), from taking over the world.

From acclaimed director Ridley Scott (“Gladiator,” “Prometheus”) comes this epic story of one man’s daring courage to take on the might of an empire. Featuring state-of-the-art 3D and visual effects, Scott brings new life to the story of the defiant leader Moses (Christian Bale) as he rises up against the Egyptian Pharaoh Ramses (Joel Edgerton), setting 600,000 slaves on a monumental journey of escape from Egypt and its terrifying cycle of deadly plagues.

I’m generally skeptical of sword-and-sandal movies, but the cast and crew of this one, including John Turturro, Sigourney Weaver, Ben Kingsley and Aaron Paul, promises greatness.

The delightful Broadway classic comes to the big screen with Oscar nominee Quvenzhané Wallis (“Beasts of the Southern Wild”) starring as Annie, a happy foster kid who’s tough enough to make it on the streets of New York in 2014 (don’t try this at home, kids!). It’s been a “hard knock” life, thanks to her mean foster mom Miss Hannigan (Cameron Diaz), but everything changes when hard-nosed tycoon and New York mayoral candidate Will Stacks (Jamie Foxx) rescues her from the path of a speeding vehicle.

You know how all the exhibits spring to life at the museum every night? Well, that magic might come to an end unless security guard/CEO Larry Daley (Ben Stiller) can figure out why the Tablet of Ahkmenrah is dying out. To do so, he spans the globe, uniting favorite and new characters while embarking on an epic quest to save the magic before it’s gone forever.

Directed and produced by Tim Burton, “Big Eyes” is based on the true story of Walter Keane (Christoph Waltz), one of the most successful painters of the 1950s and 1960s. The artist catapulted to international fame by commercializing his enigmatic paintings of waifs with big eyes. Except … they were actually painted by his wife, Margaret (Amy Adams).

“Big Eyes” tells the story of Margaret’s awakening as an artist, the phenomenal success of her paintings, and her tumultuous relationship with her husband. Also stars Danny Huston, Krysten Ritter, Jason Schwartzman and Terence Stamp. At 87, Keane is still painting today; check out her website.

This big screen adaptation of the Tony Award-winning Broadway musical is a modern twist on the beloved Brothers Grimm fairy tales “Cinderella,” “Little Red Riding Hood,” “Jack and the Beanstalk” and “Rapunzel.”

The tales are tied together by an original story involving a baker and his wife, their wish to begin a family, and their interaction with the witch who has put a curse on them. Meryl Streep (The Witch), Anna Kendrick (Cinderella), Chris Pine (The Prince), Johnny Depp (The Wolf) and Emily Blunt (The Baker’s Wife) head up the cast of this gorgeous film directed by Rob Marshall.

Angelina Jolie directs and produces this epic drama that follows the incredible life of Olympian and war hero Louis “Louie” Zamperini (Jack O’Connell) who, along with two other crewmen, survived in a raft for 47 days after a near-fatal plane crash in WWII — only to be caught by the Japanese Navy and sent to a prisoner-of-war camp.

Adapted from Laura Hillenbrand’s book, “Unbroken” chronicles the resilient power of the human spirit. Also stars Domhnall Gleeson and Finn Wittrock as Phil and Mac, the airmen with whom Zamperini endured perilous weeks adrift in the open Pacific, Garrett Hedlund and John Magaro as fellow POWs who find an unexpected camaraderie during their internment, Alex Russell as Zamperini’s brother, Pete, and in his English-language feature debut, Japanese actor Miyavi as the brutal camp guard known only to the men as “The Bird.”