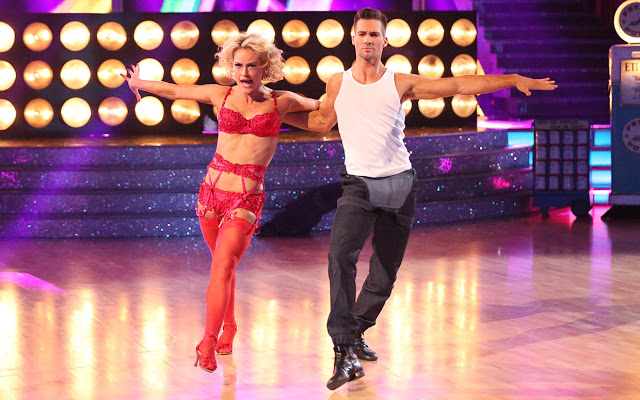 “Dancing with the Stars” aired its 19th season finale last night, with Janel Parrish and Val Chmerkovskiy, Alfonso Ribeiro and Witney Carson, and Sadie Robertson and Mark Ballas battling for the Mirror Ball trophy. Though ratings have fallen over the last couple seasons, the show is still going strong. One reason could be that the romance and sexuality inherent in ballroom dancing keeps the show alive. There’s always at least one couple per season who could be involved with their partner outside of what we see on screen, and the hosts and producers love to encourage that possibility of real life romance.

This season is comparatively light on that front, largely because Peta Murgatroyd was not paired with the hot young eligible bachelor this time. Since Peta’s start on the show, she’s been with the eligible bachelor nearly every time, from James Maslow to Brant Daugherty, to Sean Lowe. Each time, I’ve noticed too much pressure to form a sensual or sexual relationship between them and to make people think that perhaps there’s something else going on. I’ve never been a big fan of Peta for this very reason. It’s not necessary, and she seems to be trying too hard.

This season there may not have been an eligible bachelor: the only man fitting that description is Jonathan Bennett, who I believe is gay. Perhaps that’s why he wasn’t paired with Peta and was instead with newcomer Allison Holker, who’s married in real life (to another dancer, Stephen “tWitch” Boss). Peta’s instead paired with 76-year-old Tommy Chong. They did extremely well, deservedly, making it to the semi-finals (week 10) and placing Tommy as the oldest person in the history of the show to survive this long into the competition. Peta is a great partner for him, and he for her, and I’ve really enjoyed her this season. It’s as if she doesn’t expect to win, so she’s mostly just trying to have a good time while still pushing her partner to do his best. She seems more relaxed about it, and there’s certainly no pressure to create a romantic pretense.

That gauntlet has been taken up, though slowly, by Janel Parrish and Val Chmerkovskiy, who danced as Romeo and Juliet in week 8’s Dynamic Duos competition, and performed a gorgeous, romantic freestyle—with lots of kissing—in Monday’s finals. Val, like Peta, is one of the pros who is often paired with a young, single woman with whom he could conceivably develop a relationship, as was his older brother Maks (gossip magazines still push the Maks and Meryl partnership that started last season). I wonder how much the producers consider sexual orientation and marital status before deciding who’s paired up with whom.

Do the dancers feel pressure to build a romance where there isn’t one? The producers certainly hint at relationships, and encourage the dancers to find those moments where they can. Judge Julianne Hough said last night that she worked with Janel and Val on their samba on arms, turns, and “a lot more than just passion,” but the package only focused on their connection. I think by now many people know that there’s not that much “reality” in reality television, yet people still assume that something is going on. The audience is more than happy to latch on to this showmance, egging the dancers on to build a kiss into their choreography or take on romantic roles (like Romeo and Juliet), and the gossip mags are more than happy to perpetuate it too. Are we just shippers, hopeful to find those romantic relationships where we can, especially when they’re so few and far between on television?

Flirting: Part of the Dance Culture

Dancing is an inherently sexy, romantic activity. We are literally using our bodies to express ourselves, which can be sensual and sexual, even if we don’t intend it. Ballroom dancing is particularly romantic, because we’re actively sharing our body with a partner. We need to allow a certain amount of proximity and intimacy, and a huge amount of trust, to dance with another person. Flirting is also an enormous part of dance culture; before, after, and during the dance. But that doesn’t mean something romantic or sexual is going on.

I understand why the producers want romance on the show: it creates drama and excitement, and gets people talking. But what people don’t understand is that social dancers don’t necessarily dance to find romance. Sometimes, yes: lots of people meet their significant others while dancing (as I did), and new dancers often get involved in an effort to meet new people. I absolutely encourage anyone trolling dating websites like OKCupid to instead try a dance class or social event—even if you don’t meet the love of your life, you’ll at least have some fun.

But most people dance because it’s fun and they love it. They love the intimacy and the challenge of dancing with someone new. You can go to a social dance and dance with whomever is there. You can flirt and move closely with someone—of the opposite sex or the same sex—and there’s no assumption that you’re there for anything more than to dance. It’s expected that you will be close with your partner, with many partners, throughout the night, and there’s nothing untoward or promiscuous about it. It’s just dancing. Once the dance ends, it’s so wonderfully freeing to just say, “Thanks for the dance,” and flitter away to the next partner. No questions asked, no strings attached, no guilt involved. Certainly no expectation of anything more, except maybe another dance, if both parties want it.

I once felt a dilemma regarding a social dancer I knew years ago. I didn’t know him well, but he struck me as a know-it-all and had done or said some things that made me decide that I didn’t like him—something I rarely do. I tend to naively trust and find good in everyone.

We were both at a huge weekend-long dance festival in Natick, Mass., called Neffa. Thousands of people attend each year for the workshops, dances, and performances in folk and social dance and music. I somehow got into dancing with this fellow. We weren’t even in a dance or workshop. We were in the back of the exhibit hall talking about dancing, and he started teaching me a really cool, complicated dip called the Window Shade (click through and watch the video; window shade at 2:10). He was great at breaking down the steps and really showing the way to safely do the trick without endangering either partner. We just sort of messed around, with that move and other dance steps, kind of playing around without music, but having so much fun. I remember feeling so conflicted about it, about him, because I had to allow him to hold me in order to teach me the moves, but I was still convinced that I didn’t like him. He still struck me as overconfident, even cocky, but I had such a great time flirting and dancing with him.

It’s easy for dancers to say, “This is only dancing. I’m not really interested in this person at all except for their ability on the dance floor.” It’s easy to dance with someone who you’re not physically or romantically attracted to, especially if they’re a good dancer, because you want to enjoy the fun and challenge of following them. You want to put your trust in them. Perhaps I’m totally misguided in a “When Harry Met Sally,” “men and women can’t be friends” kind of way, but I don’t think so. Men and women who are gay, for example, happily dance with someone of the opposite gender and exhibit the same closeness and sexiness, but they’re clearly not attracted to the other person. I’m a straight woman, but I’ll often dance with women because I like to lead and because I’d rather dance than sit out (there are usually more women than men in the ballroom). I’m equally as sensual with them as with men (relatively speaking), but once the dance is over, that’s it.

Yes, there are certainly dancers who take advantage of this trust and intimacy, so you still need to listen to your gut, and don’t dance with someone if they give you the willies. But I think those kinds of dancers are few and far between, because most of them stick with dancing for the same reason we do: they love to dance.

There was a man at the ballroom dances I went to in Virginia who loved the rumba, a particularly sensuous, slow moving dance. The studio had a wall of mirrors along one side, and this man would always lead his partner to the mirrored side of the room. He’d lead her in front of him so they both faced the mirror, doing the side-to-side rumba basic with proper hip action. It was slightly disconcerting, because he took a little too much pleasure in watching himself in the mirror, gyrating with his partner. He was a nice enough guy off the floor and was still fun to dance with because he led well, so I eventually decided he was harmless and just liked to look at himself in the mirror.

Lots of dancers do meet their romantic partner while dancing, and it can make it that much more enjoyable. But just as there are couples who are romantically involved, there are also established partners who aren’t. Professional swing dancers and teachers Steve and Chanzie (featured in the upcoming documentary on swing dancing that I’m involved with), for example, have an on-going working relationship. People assume that they are a romantic couple because they share such closeness when they dance, but it’s strictly platonic.

Similarly, on “Dancing With the Stars,” the couples work solely with that one partner for many weeks, so they are going to build a different level of intimacy than just going to a dance and dancing with several people in an evening. But I do wonder if the celebrities fall into the new dancer trap and confuse the necessary closeness of dancing with real intimacy. Most of the contestants are not social dancers, so they may not be aware of the culture at social dances. But many of them are actors in some way, so they’ve probably encountered the same thing, or worse, in their acting projects (actors often have to kiss or appear nude with their partners, which doesn’t happen in dancing—as close to nude as “Dancing With the Stars” costumes may get).

I’m a shipper as much as the next person, if not more. I love to see the romantic tension and the will-they-won’t-they give and take of characters in a scripted show (like, currently, Finn and Alicia on “The Good Wife”). But I don’t care for it in “Dancing with the Stars.” As a social dancer, I know that the romance doesn’t have to be present for the dancing to be hot, and I feel slightly manipulated or deceived when they try to convince me that something exists on “Dancing With the Stars” when it doesn’t. I do believe that the partnerships on the show grow very close, but it still doesn’t mean there’s anything romantic happening, and it just becomes gossip. Instead, let’s just enjoy the dancing for what it is.