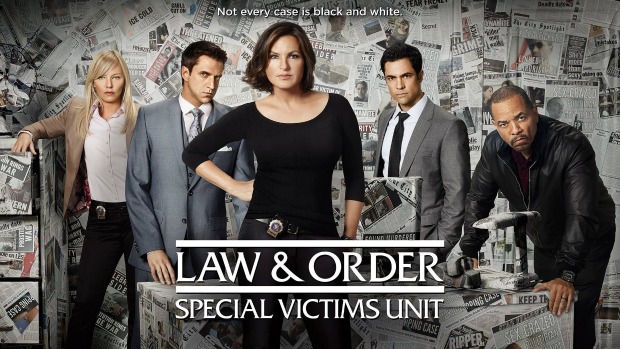 Tuesday night, November 11, 2014 at 10:00 ET, “Chicago Fire” will begin a three-show crossover on NBC, followed by “Law & Order: SVU” on Wednesday at 9 and “Chicago PD” at 10. Characters from each show will “cross over” into the other show as the story lines blend.

Matt Olmstead is showrunner for the two Chicago shows, while Warren Leight is showrunner for SVU. The two men talked with journalists last week about the ambitious undertaking of crossing the three shows. They said that this is a true crossover in that there are several scenes with actors from each show appearing on the sets of the other shows.

Below are some of the highlights of the discussion:

On how the writing teams worked for the crossovers:

Warren: Each show’s team wrote each show’s episode, but Matt and I were on the phone a lot in the initial planning stages. One of our writers, who wrote the teleplay for the SVU part of the crossover, went out to L.A. for a few days. There’s back and forth.

Showrunners are all about control. It’s very scary for a showrunner to let somebody else write their characters’ lines, so we checked in with each other. If there was something that I felt was a little bit wrong for one of our characters in the PD part, I politely made my opinions known and vice versa.

On the difficulty of integrating the story lines:

Matt: Dick Wolf [Executive Producer of all three shows] laid out a version of what he was envisioning of what the bouncing ball would be, essentially. You can spend a lot of time on meetings and follow-up meetings and logistics and trying to chart this whole thing.

I think what Warren and I both did was, “Let’s just jump in.” I know what I’m going to hand off to him at the end of “Chicago Fire,” and he’s telling me what he’s going to hand back over to me from SVU. “Let’s just get some drafts in, and then, we can begin to fine-tune and figure out the logistics from there.”

Warren: It’s fun for the actors to act with each other, and they always come back refreshed. We have a smaller squad than Matt’s team does. We have only four detectives, so at first, we had to grapple with extra bodies in our squad room and which ones go where. Just a few more pieces on the board.

Always when we’re writing for actors this good, you don’t want them to be in a three-page scene and just have one line. It’s sort of family hold-back in a way. You want to make sure everybody gets something.

On the potential fireworks between the characters of Benson (played by Mariska Hargitay) and Voight (played by Jason Beghe):

Warren: You know, it was fine when they were in New York, Matt.

Warren: There’s two kinds of fireworks we could mean here. They have two very different approaches to interrogation. The two shows have different approaches to police procedure. I think we all know Voight can be a little more physical, and Olivia is, in general, a more empathic detective. There are two different schools of how you work an interrogation, and those kinds of fireworks take place in both episodes.

I think they’re among the most fun scenes in both PD and SVU. Then, the question is, at the end of the day, at the end of a case, do these two probably have more in common than any of the other people in their squad room? What did you think of that, Matt?

Matt: I totally agree…. The chemistry and dynamic of two characters in both shows was reinforced by how the two actors felt about each other. In terms of Voight, he rolls over most people. There aren’t a lot of people who can go toe to toe with him, so here comes this equal whom he respects, is formidable, he knows he can’t run a game on her, and even though they have different policing styles, there’s a mutual respect.

On whether Voight will ever have a love interest:

Matt: He’s kind of married to the job. I said [to Jason], “You know, there’s a scene coming up with Mariska.” He said, “Don’t say another word! I know exactly how to play it.” So, who knows what else in the character’s mind he feels about the Benson character?