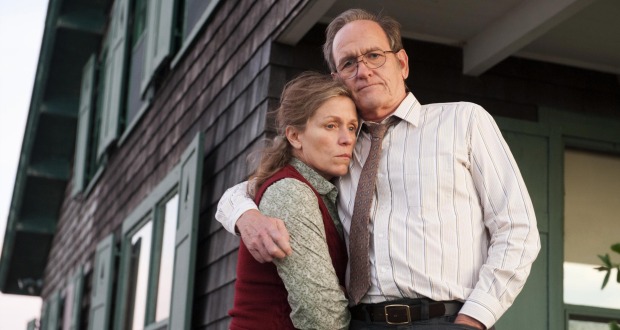 Frances McDormand is magnificent as the title character of the four-part HBO miniseries “Olive Kitteridge,” based on the Pulitizer Prize-winning novel by Elizabeth Strout that chronicles the illicit affairs, crime, hilarity and tragedy that ensures in the seemingly placid and hardscrabble New England town of Crosby over a 25-year time span.

The story begins when Olive is in her early 40’s and teaches seventh-grade math. She is married to a kindly pharmacist, who she often badgers and insults. The miniseries is as much a story of Olive’s journey as a portrait of an ordinary marriage with its trials and tribulations, petty resentments and minor victories. Richard Jenkins is terrific as Olive’s long-suffering husband, Henry, who is as easy-going and relatively sunny as Olive is curmudgeonly and negative.

The action continues until Olive is in her early 70’s, retired, and reconciled to the rhythm of an uneventful but relatively happy marriage. During the years she tries to find balance in her relationship with her son (John Gallagher Jr.), who she loves but who resents and fears her sharp tongue and mood swings. Life takes cruel and typical twists for Olive as it does for most people.

Romance enters unexpectedly in late life in the form of wealthy widower Sam (Bill Murray), a bald-headed old man with a big belly she discovers one morning slumped over on her walking path, possibly from a heart attack. “Are you dead?” she asked him. “Apparently not,” he replied. Tragedy and comedy co-exist naturally in Olive’s world.

With her gray curls and thick, veined ankles, unadorned on screen as she is in the book, Olive, captured by McDormand, is a fascinating and complicated character. She is ferocious, intelligent, tactless, cruel and achingly kind, sometimes all at once. The actress is not physically like Olive, who Strout described as stout and big, but she inhabits the spirit of the character so completely – a fact sure to be recognized this awards season – that you cannot take your eyes off her even as you wonder what cringe-worthy thing she will say or do next. The miracle is that Olive, who is unbelievable rude and unlikeable, slowly grows on you, and you come to love her honesty and heart. McDormand captures this without sentimentality.

McDormand and Tom Hanks executive produced the miniseries, which hews to the spirit of the book that has been gracefully adapted by Jane Anderson and expertly directed by “The Kids Are All Right” director Lisa Cholodenko. Except for Hanks, they all turned up last week at the show’s premiere at the SVA Theater in Manhattan, along with cast members Rosemarie DeWitt and Cory Michael Smith.

On the red carpet I asked author Elizabeth Strout who inspired her for the character of Olive.

“People always wonder if it’s my mother,” she said. “It’s not. I grew up in Maine. Even though I’ve lived here for over 30 years, I grew up on a dirt road with many older relatives, old aunts, mostly aunts, often grumpy, and it was just the air I breathed as a child, so it was sort of natural for me to find that character as a compilation of many of these different people that I grew up with.”

I asked Strout how she came up with Olive’s physicality, her large size and ungainliness. “Olive just came to me as somebody who was large. She’d gotten larger and she knew that and was uncomfortable with that, but it wasn’t going to stop her from eating. I could almost feel it and sometimes, even now, I guess because there’s been so much written about Olive, all of a sudden – this is already a few years ago in my writing career – I just looked at my ankles the other day and I thought, ‘Oh, they’ll get bigger, like Olive’s,” she laughed. “There wasn’t any particular person that I based her on. I just saw her and felt her.”

At the end of the book, Olive seems to be embarking on a romance. I asked Strout if she had any plans for a follow-up book on Olive? “I’ve actually found some old Olive stories that I hadn’t used. I’m such a disorganized person, but I don’t know. I think maybe I better just let her go and have people hope the best for her.”

Strout told me the project for the series began with a phone call three years ago from her agent, who told her, “You know, Frances McDormand is interested in this,’ and I was like, ‘Really? Wow! That’s great.’ I met with Frances a few times in New York and we talked about Olive. We talked about different things. She’s an amazing person and actor, and she got it. She knew about it because Olive’s very interior. There’s a lot that goes inside without her speaking it. And Frances does that. She shows us in her minimalist motions and her facial expressions.”

I asked if McDormand asked for tips on portraying the character, but her only questions were, unsurprisingly, about adapting the book. “She asked me about the timing. Like how did I think they would get the 25 years in? I said I had no idea. I don’t know anything about film. I was no good,” Strout laughed.

The author told me she never envisioned her book as a movie. “No. I did not. ‘The Burgess Boys,’ which I just wrote, I actually can see that as a movie because the narrative is much clearer and the characters are very distinct in certain ways. But with Olive, I didn’t. I did not think of it, so it’s extra special for me.”

I asked screenwriter Jane Anderson how she became involved in the project and about the challenges of adapting the book. “I read the book for pleasure, and when Fran called me up and said, ‘Are you interested in adapting it?’ I said absolutely. But it took me a couple of years to get it right, because it’s a great piece of literature and the better the piece of literature, the more profound and subtle the piece of literature, the harder it is to adapt for screen. And because my parents are in Olive and Henry, I saw the theme of the book as the theme of making a marriage work and, I think, ultimately they do work as a couple. I think often the pessimistic, difficult people and tender, easy people often work together as a unit. They need each other.”

The main goal was to be true to the book’s lack of sentimentality. Olive is a character you can’t stand at first but she grows on you. Anderson agreed.

“That first chapter, she’s terrible. You can’t bear the woman. She’s cranky. She’s cruel. She’s dismissive. But then there’s the brilliance of Fran. Because Fran didn’t just want to just make her sentimental. Fran didn’t care if you liked her or not, and that’s what made her so good. Fran has no vanity. It was lovely to have her voice, the voice of Olive.”

Jenkins, who is so terrific as Olive’s husband, told me he didn’t worry about his character coming across as one-dimensional or too much of a milquetoast. “I think the time made it possible, the movie’s four-hour length. You get to see a complex life, not just certain characteristics of a person. You get to see the whole person. Nobody is just one thing, so I think that helped.”

Director Lisa Cholodenko told me how she became involved in the project when McDormand called her three years ago and told her about the book, which she then sent. “She said she read it. I’m going to play it. It hasn’t been published. I’m going to deal with HBO, see if you’re interested in adapting it.”

The director told me she loved the book and heard McDormand’s voice, but the timing wasn’t right for her. “I told Frances, I don’t know how to adapt this. Go with God. I hope you find somebody awesome to do it. I don’t think I’m the person to do it now, but I would love to talk to you if you get a script. And three years later I got a call from HBO saying, ‘Hey, we have this script. Are you still interested?’ I said, ‘Yeah, I’ll read it.’ I was hooked.”

I asked about the casting choice of Bill Murray as Olive’s possible love interest. He has a legendary reputation for being difficult to contact and refusing most movie parts, so his casting is particularly intriguing. “What’s not to love about Bill Murray?” Cholodenko chortled. “What was more wonderful is you never know if he’s going to show up, so you’re like, Yeah, yeah, no, Bill’s going to do it! Yeah, let me know when he lands. And he did!”

All premiere photos taken by and used with permission of Paula Schwartz.