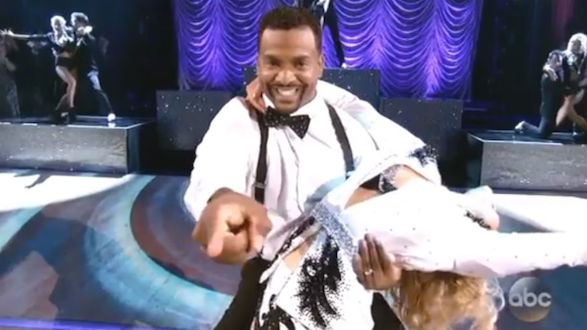 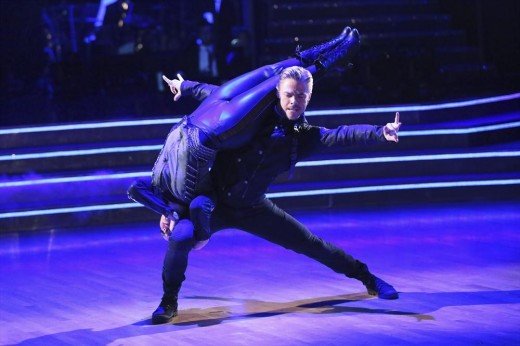 Wow, what a dynamic night of tough competition, dance fans! The “Dancing with the Stars” Finals are on fire, with four brilliant freestyle routines and four perfect scores, and the dancers all having a big wacky party!

The stars have two performances tonight: a judges’ pick, where they dance one of their earlier routines chosen by one of the judges, and then the always stupendous, always exciting freestyle round. You never know what can happen, and it’s usually quite a good show.

Tonight is no exception. As great as all the dancing is, my choice for Top 5 is easy. Though I enjoy the Judges’ Picks, I felt all of them lacked a little something from the first performance, either because of problems with sets or music, or the dancers’ injuries taking a small toll on them. Plus, they just didn’t have the novelty of seeing them for the first time. Add to that how brilliant all four of the freestyle dances are, it’s a pretty clear choice for My Top 5.

But that’s only four, you say? For my fifth, I decided to give The Pros some recognition. I’ve talked before about how I generally don’t like the dance bumpers the pros do after commercial breaks because they’re repetitive and full of overtly sexy flexes and poses. Tonight, happily, they dance a great opening number, and a terrific bumper (before Janel and Val’s samba) filled with swing, lindy, and Charleston moves; actual dancing with no poses. Val really stands out in that bumper too, clearly having a great time and just cutting loose. It’s quite fun to see.

Bethany and Derek’s Revolution Freestyle: Bethany bounces back after her problematic Judge’s Pick with this tight, exciting Revolution number. Derek’s choreography is dramatic and super cool (perhaps taking a page from Travis Wall), and though Bethany doesn’t have quite the same pizazz as the professional dancers, she absolutely holds her own and looks strong and flexible. The lifts are fantastic, the choreography generally great all around.

Sadie and Mark’s Mario Brothers Freestyle: How adorable is this? So cute. As with her Judge’s Pick salsa, Sadie is just the tiniest bit off the music in a couple of places, but she’s having a great time with the material, and Mark’s choreography is athletic and fun. I love that exciting, high A-frame. I wonder how or why he chose this theme, but apparently it’s something he’s wanted to do for a while. It definitely suits them both extremely well.

Janel and Val’s Intimate Freestyle: I was concerned that they would fall behind in scores because they didn’t have the same glitz, glamour, or kitsch, that the other dancers have, but “less is more” definitely works for them. They really play up the sexy, romantic angle, but the routine is absolutely gorgeous, with incredible choreography, and beautifully executed dancing. I do find the music distracting, with its dramatic cover of the fun 80s anthem 500 miles, but I got past it thanks to the routine’s incredible lifts. The unique fish dive out of that complicated lift, and the impressive straight press? Amazing.

Alfonso and Witney’s Medley Freestyle: They had me at tap! This routine is classic, old school dancing, with swing, Charleston, Lindy, some hip-hop, and some tap all mixed together. Super-fast non-step tempo, and despite the troupe’s presence, the routine is pretty much all Alfonso and Witney. So exciting and very impressive. I’m glad Witney doesn’t injure herself (that we know of); Alfonso accidentally steps on her foot and she twists her ankle in an ugly, painful-looking way at the start of the routine, but she keeps going and doesn’t look injured at all. Granted, the medley he promises in the package sounds much more involved than what we see, but their choreography is fantastic. The tapping in the routine is very classic stuff (pullbacks, double doubles, and falling off the log), and he’s obviously not wearing tap shoes so of course the sound is dubbed, but it’s ok. It’s still awesome, and works well with the rest of the routine too. Fantastic.

Bethany and Derek’s Week 1 Jive: Such a shame the set didn’t move and knocked both of them off their game. Bethany needs to consider the song lyrics more and
just shake it off (easier said than done, I know), because the error throws her for most of the dance. Too bad because she’s definitely improved tremendously over the weeks.

Sadie and Mark’s Week 4 Samba: She’s still totally adorable and has a great time with the routine, but she’s slightly ahead of the rhythm almost the whole time. In fact, it’s probably her excitement and adrenaline that causes her to rush. It’s fun to see Barry Fife—I mean Len Goodman, working with the couple.

Janel and Val’s Week 6 Samba: I can see what Julianne is saying about their connection, especially given how much they focus on it in the package, because she plays to the audience more than to Val. But she’s still a great dancer and you can’t tell she’s injured. The kiss on the forehead reads odd though, because it breaks the smolder of the moment.

Alfonso and Witney’s Week 1 Jive: This was a great routine in week 1 so it’s hard to improve, and in fact, I think week 1 was still slightly better because Alfonso had a blast with it. He smiled so brightly during that routine the first time.

It’s so sad to eliminate someone tonight, especially after all the exemplary dancing and perfect scores, but someone has to go home. Despite her wonderful back-story and impressive journey, we bid a tearful adieu to Bethany, leaving Sadie, Janel, and Alfonso as your Top 3.

So what do you think, dance fans? Were you surprised to see Bethany go? Which are your favorite routines? Who do you think will take the Mirror Ball trophy tonight?