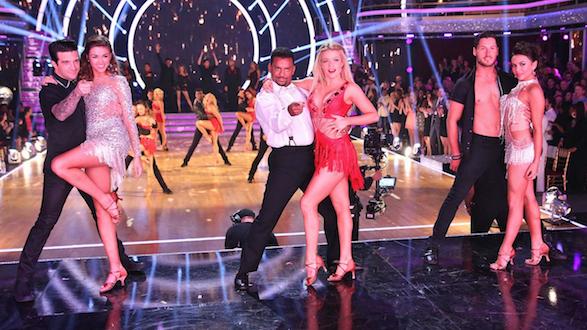 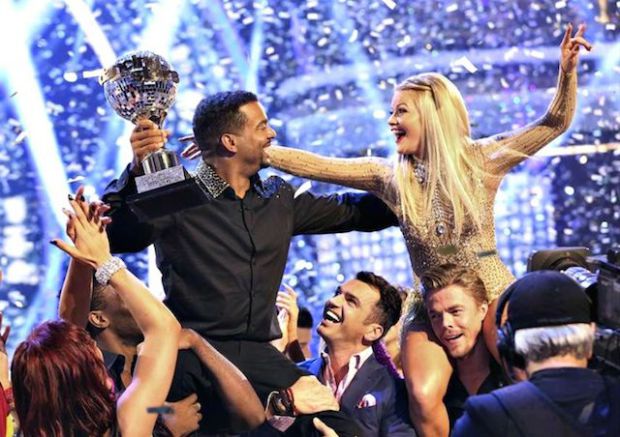 Wow, dance fans! It’s done! The closest competition probably in the history of “Dancing with the Stars” is now over, and we have a new champion!

But first, there’s an awful lot of filler to get through before they announce the winner. Some of it is lots of fun, and some seems unnecessary, but it is a good celebration of the season.

There are lots of packages, from recaps of several weeks of competition, to crazy outtakes and illuminating behind the scenes shots. The dancers say what they’re grateful for, and the final three competitors give thanks and farewell to their partners. I especially love the pros’ assessment of the three finalists, talking about their strengths and weaknesses (in the “Road to the Finals” special), and the cute “Fresh Prince of Bel Air” rewrite. I just wish, with all the special packages, that they’d bring back the DanceCenter segments. I still miss those.

DWTS celebrates in style with lots of live performances too, with pros, former contestants, and musical guests Nick Jonas, Jennifer Hudson, and Meghan Trainor. I especially enjoy the latter performance, with its choreographed routines and pink doors. Some former contestants dance shortened versions of their previous numbers, like Lea’s jive, Antonio’s cha-cha, Betsey’s disastrous boa cha-cha, and Jonathan and Allison’s jazz, this time with an assist from Allison’s husband Twitch. Boy, they had Allison working overtime tonight; she seemed to be in nearly every number.

Bethany and Derek won the audience’s choice for freestyle encore, and performed their brilliant routine again. Of the many pro dances, I especially love the waltz that Tony and Emma dance with two other couples. They whirl around on a white circular stage while fake snow falls. It’s beautiful, but perhaps heightened by the fact that I really miss seasons.

It’s quite a crazy party too, with thousands of fans screaming and crazy live happenings. And like any good party, they even have cake, as they wheel out a birthday cake for Bruno—who doesn’t even realize what’s happening.

There are three new dances too, as the final three have to do a 24-hour Fusion Challenge for their final competition. It doesn’t make much difference for the winning decision, because all three couples get perfect scores—but all three routines are really terrific.

Sadie and Mark’s Samba Quickstep Fusion: I still don’t quite buy that Sadie has no dance experience, because she’s been so good this whole time. She does look a little tired, or nervous, but it’s a difficult routine, with a nice mix of the two dances. She’s still stunningly beautiful and so cute. Btw, if that “fun fact” they shared during the “Road to the Finals” is true, that they didn’t have any dancing at her prom, then that is one of the saddest things I’ve heard in a long time.

Janel and Val’s Fox Trot Paso Doble Fusion: It’s difficult dancing to music where the beat doesn’t come in right away, though it makes it more dramatic when it does. But this is a great, dynamic routine. I love the combination of the two dances, and Janel’s a beautiful, clean dancer.

Alfonso and Witney’s Cha-Cha Argentine Tango Fusion: This is a strange mix of dance styles—and yet it works really well. I love those quick ganchos and that incredible kick-yourself-in-the-head assisted leap Witney does. The routine is slightly messy, probably because he’s still injured, but the choreography’s great.

Finally, after too many commercial breaks, it’s time for the results. I’m a little surprised that Janel and Val comes in third place, especially given all the buzz about whether the two are dating. I thought Janel would battle Alfonso for the win. But no, Sadie goes up against Alfonso, but Alfonso takes the trophy. As much as I love Sadie, I’m glad Alfonso won. He is definitely the stronger dancer, and he’s an infinite performer.

So there you have it, dance fans! Your new “Dancing with the Stars” Mirror Ball champions: Alfonso Ribeiro and Witney Carson!

What do you think? Are you happy Alfonso won? Or were you hoping Janel or Sadie would take the trophy? Chime in below.