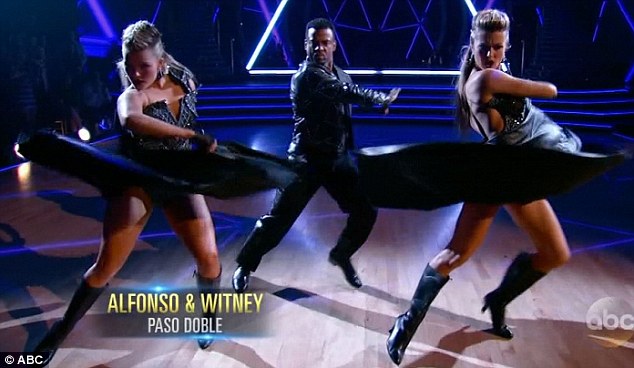 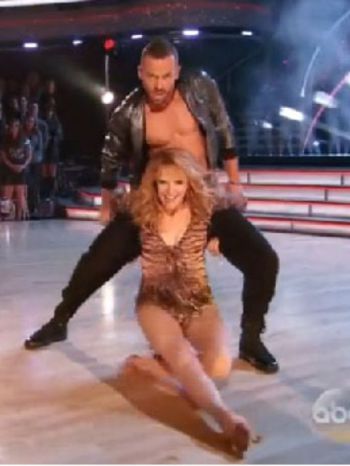 Quite an exciting night full of anticipation on “Dancing with the Stars,” huh dance fans? Tom Bergeron and Erin Andrews (in a smashing red pantsuit) announce first thing that Tommy and Peta have made it into next week’s semi-finals!

First of all, it’s already the semi-finals? Boy did the time fly by. Secondly, I’m not sure anyone expected Tommy to stick around this long, including Tommy. But he did, and though he’s not the best technical dancer, he’s still great. Now it’s anyone’s guess who could be going home.

Wow, the judges are on some kind of happy juice tonight! They’re laughing and goofing around and . . . choking on something. I’m not sure what’s happening exactly, but they’re completely off their gourds. And Len’s being quite generous! What a wacky evening.

It’s a very full night too, as the contestants dance two routines each, their duet and a trio with another pro. The trios are on fire too, making for a very difficult decision. So let’s get into My Top 5:

Janel and Val’s Quickstep: Wow, that’s a fast quickstep that, once they get started, never stops moving. Helpfully, the slo-mo replay shows the exact moment when Val’s feet get stuck and the pair gets a little tripped up, but they recover quickly, and the rest of the routine is wonderful. It’s a sweet, classy, fun quickstep, and a tough routine. And the kiss (big kiss!) works well, though I’m not as anxious to see it as others are.

Alfonso and Witney’s Paso Doble with Lindsay: Wow, they’re really doing crazy things with choosing which dances should match which songs. Turn Down For What is not a paso doble—and yet, it totally works! I can’t believe how well, in fact. It’s much better than it has a right to be. When I think about it though, the Paso Doble is all quick, sharp, strong movements and lots of thrust, and the same is true of hip-hop. So it actually makes sense. It’s just so crazy to think about.

Bethany and Derek’s Argentine Tango with Tony: I confess this doesn’t quite live up to my expectations, because I’m really excited about a three-person Argentine Tango. It’s still very good, with lots of cool moves, and Bethany is turning into quite an amazing dancer. I agree with Carrie Anne that I want a little more connection between the partners, but she’s dynamic.

Sadie and Mark’s Fox Trot with Emma: This is a terrific showing for a history-making fox trot. Sadie is the first female celebrity to dance with a female pro, and she absolutely holds her own (with help from that gorgeous gown). The choreography is wonderful, they dance it really well, and you can’t really tell that Sadie messes up at the end. Yes, there’s a tiny moment where something is just a little awkward, but I probably wouldn’t have noticed if she hadn’t said anything. My only complaint is from a story standpoint: I want Emma to say forget this guy and not pine after him like a puppy, but I know that won’t work well with the dance.

Janel and Val’s Salsa with Keo: Wow, this is cool. Yes, there’s not much salsa in it, but what they’re doing is really funky. And exhausting! I love the stepping, and the routine is hot and very athletic, with some cool, tricky lifts at the end there. I agree with Len, it’s slightly uncomfortable, but they’re still impressive lifts done very well. It’s wild.

Tommy and Peta’s Viennese Waltz: Tommy needs to watch his posture a little, and he has a little slip, but the waltz is very nice. I love Carrie Anne’s comment: “you truly teach us that less is more.”

Lea and Artem’s Samba: The music (not a samba) is a bit slow and they’re off step, but she looks sexy. I agree with Carrie Anne, she needs more of the wild and crazy abandon, because she’s still too careful. But she has great legs, and I love her speech.

Bethany and Derek’s Viennese Waltz: I want Bethany to smooth out her waltz steps a bit, and the routine is too short, but it’s beautiful and sweet. I’d like to have seen more.

Sadie and Mark’s Jive: They’re off beat and her footwork is like her diction: a little mushy. But she’s a good dancer and she’s so cute.

Tommy and Peta’s Samba with Sharna: This didn’t work for me: not enough samba and too much with the sexy innuendo and flexing and posing. It’s also messy, but Tommy is definitely an entertainer and he’s clearly having fun.

Lea and Artem’s Paso Doble with Henry: She’s adorable, but she’s still being too careful. She needs more strength and more thrust. I’m starting to blame Artem’s choreography a little too, because the music always feels too slow.

After all the dancing and anticipation, it’s finally time for the results, and I think we’re all starting to feel that Lea may be in trouble. I think she knows it too. Sure enough, Lea is sent home. I’m a little sad, because she’s really adorable and an excellent dancer, but I also agree, especially since Tommy is already safe.

What do you think, dance fans? Are you surprised to see Tommy in the semi-finals? Did you think Lea would make it? Which are your favorite routines tonight? Let me know in the comments.