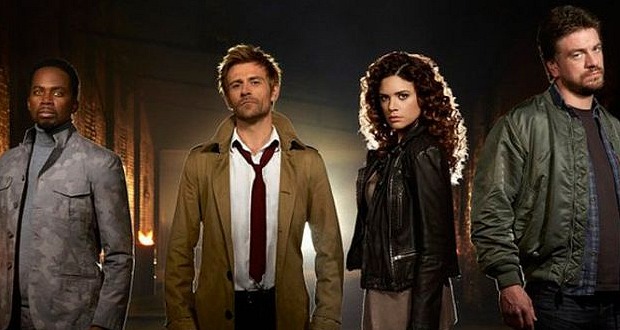 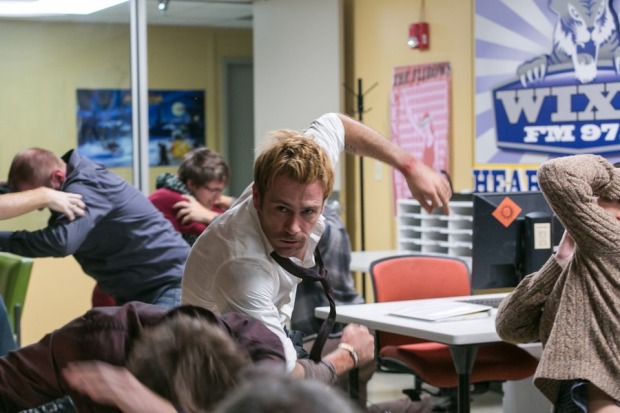 This week’s episode of “Constantine” has just about every Satanic trope you could ask for, from soul selling (well, brokering) to “heavy metal is the Devil’s music.” We also meet a major character from the comics, but the introduction is a little problematic.

The opener: a woman makes her way through animal carcasses in a warehouse to find a vinyl album that’s been hidden inside of a Bible inside of a wall. She asks a friend, Bernie, to run a “spectral analysis” on the “acetate” but repeatedly warns him not to actually listen to it. What he doesn’t listen to is her warning; he ends up putting on headphones to listen to the damned thing, and then puts a screwdriver through his neck.

Then we’re in the woods, where Zed has tracked Constantine and Chas to a cabin. (Apparently, the partnership that was implied at the end of last week’s episode didn’t mean much to John.) Chas isn’t very welcoming at first, but he accepts that Zed is temporarily part of the team. Constantine admits he has doubts about her, and asks Chas to do some investigating as he and Zed head to Chicago.

The stigmata spot on Liv’s map has begun to bleed, and Constantine thinks it’s related to the apparent suicide of his friend, Bernie. Bernie was the only record producer who would work with Constantine’s band, Mucous Membrane, for which John is undoubtedly grateful. Zed and Constantine sneak into the Medical Examiner’s office with a Hand of Glory (pickled, of course) to ask Bernie’s corpse a few questions. We get a closer look at what this magic costs Constantine: not only did he force Bernie to “relive” the worst moment of his life, but he also had to barter a few days of his own life to do so. This moment of explanation manages to be more chilling than the writhing bodies in the morgue when John and Zed wake the dead. 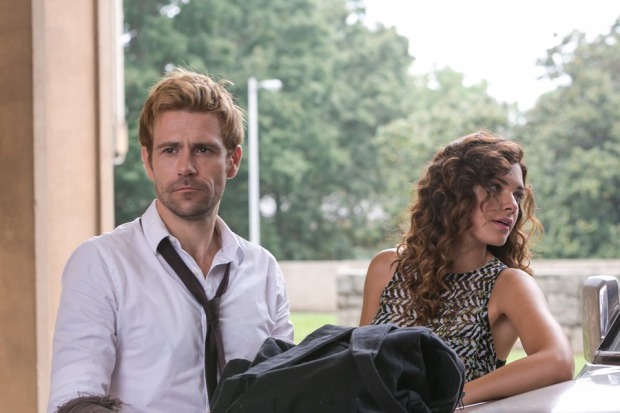 Eventually, Constantine and Zed get to the bottom of things: some 20 years ago, Jasmine Fell (the woman in the opening scene) sold her soul to the Devil—well, his broker, Anton—in exchange for her cancer-ridden husband’s life, but not the successful heavy metal music career he enjoyed (that was just a side effect). Anton offered Jasmine a chance to null the contract: she just had to find a 1930s acetate that’s rumored to be a recording of the voice of “the First of the Fallen, the Most Unnameable of Devourers.” You know, the Devil. And if you listen to the record, the voice possesses you, i.e., makes you do terrible things to yourself and others.

As it turns out, though, Anton wasn’t acting on Satan’s orders—in this case, he was working for Papa Midnite, a crime lord and voodoo priest. The writers actually showed restraint this week, and Constantine managed to say “voodoo priest” without any racist commentary (though it’s clear he doesn’t mean it as a compliment). Papa Midnite wants the recording as a kind of bargaining chip, an ace up his sleeve (like the Ace of Winchesters). And though he confesses it to Manny the Angel under duress (he’s bleeding out, thanks to a knife wound and anti-coagulants), John admits that he considered hanging on to the acetate for similar reasons.

Papa Midnite’s too smart to rely on Anton, though, and sends some heavies to the Fell household to get the acetate. His minions then wreak some havoc in Chicago that culminates with a trip to a college radio station (a moment that made me wonder what year the show is set in). Constantine charges to the rescue with “tactful noise” to block out the recording. But an impromptu mosh pit knocks his earbuds out, and he almost succumbs. Luckily, Papa Midnite shows up and blows up the speakers, giving Constantine enough time to send the minions and the record to hell.

Fans of the “Hellblazer” comics will, of course, recognize Papa Midnite as an immortal who’s just as schooled in magic as Constantine. The way he burns the Constantine voodoo doll at the end of the episode appears to be drawing a line in the sand. But Papa Midnite’s backstory is so much more complex than that of the new Big Bad, which is something I hope the show’s writers will keep in mind. 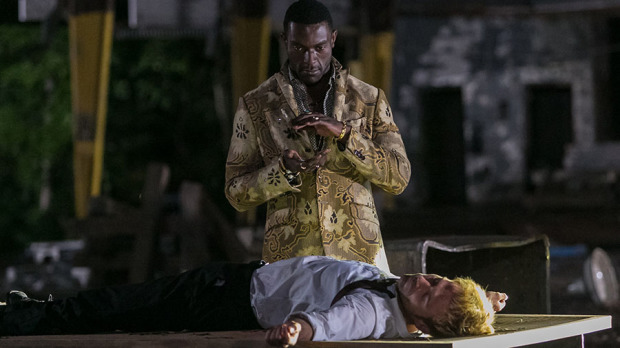 The aerial shot of Chicago’s lakefront (the McCormick Center and Soldier Field) is accompanied by a title card that reads “Chicago’s South Side.” As a native Chicagoan, I can tell you that there’s a lot more to the South Side than the South Loop.

Zed proved to be useful in multiple situations, from conjuring visions by touching the newspaper with the story of Bernie’s suicide to signing with the hearing-impaired witness to a bloodbath. But the episode’s outro is her holding a crucifix, which makes you wonder just how “helpful” she wants to be.

How did you feel about “The Devil’s Vinyl”? Were you also disappointed that it wasn’t just titled “Hear No Evil”?