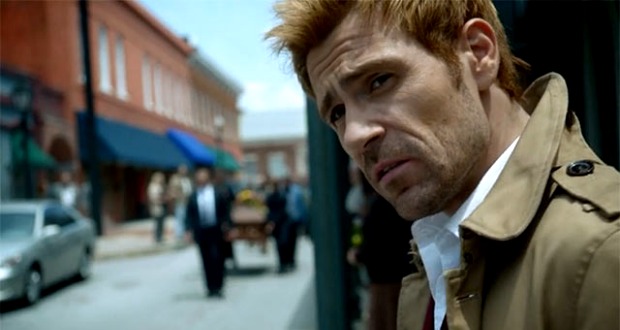 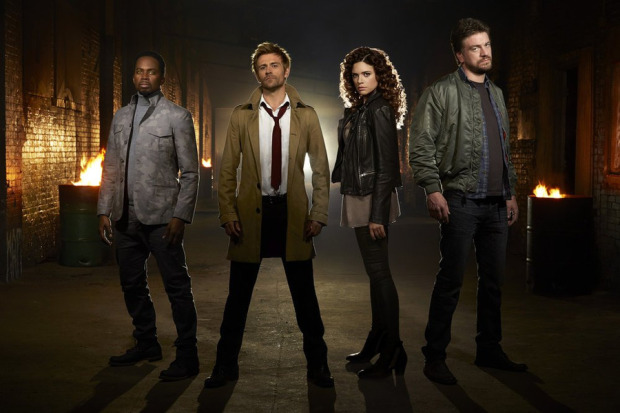 What could be better on Halloween than a story about vengeful spirits and unseen terrors? The holiday tie-in was probably unintentional, but I settled in for what I hoped would be a grown-up ghost story. Instead, “The Darkness Beneath” fumbled badly in handling some all too real problems.

The plot is pretty run of the mine, er, mill: something’s afoot in the small town of Heddwich, Pennsylvania. It seems the mine that employs the men of the town has turned against them. There have been nine deaths on the job, and the foreman, Lannis, is burnt alive in the shower in the opening scene (but not before menacing his wife). Miners say they hear knocks from down below, followed by rippling rocks in the mineshaft.

Back in Atlanta, Constantine and Chas are getting their finances in order, i.e., counting their gambling winnings (thanks to a little batraquomancy). Chas notes that the drop of Liv’s blood that landed on Heddwich is, um, bleeding, but declines Constantine’s invitation to investigate, citing the long arm—and memory—of the law (and something about a “succubus on a freight train”). So John’s on his own, but not for long. 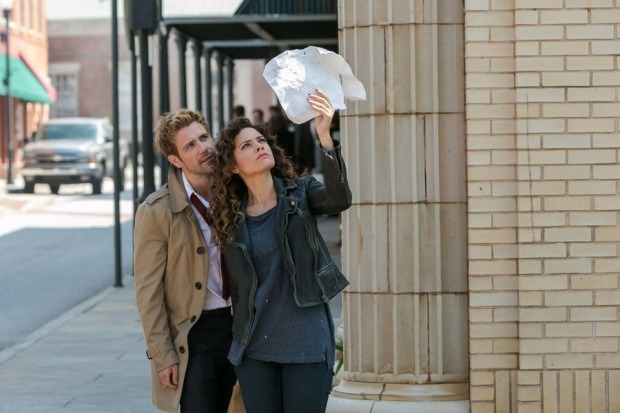 Enter Zed Martin, the woman we saw sketching Constantine at the end of the premiere episode. She doesn’t seem to know why she draws him so often, but she conveniently ends up in Heddwich in time to run into him on the street. They initially argue over the significance of these sketches, but after Zed reveals her clairsentient abilities (which Constantine promptly vets), they agree to team up long enough get to the bottom of the mystery of the mine.

And who was the demon of week? They’re the Coblynau (like the English “goblin”) who, for the purposes of this episode and not Welsh folklore, are the spirits of dead miners. The Coblynau aren’t necessarily evil; in fact, they usually only knock to warn miners that they are delving too deep. But they’ve been summoned for evildoing—or vengeance—by someone whose conjuring abilities have been amplified by the traveling Hellmouth mentioned last week.

Is that someone the pastor who’s lost a son and his faith to the mine? Or is it the widow of the abusive foreman? I’ll save you the guess, because it’s not the answer that actually makes sense; it’s Lannis’ widow (we never learn her name, and she’s only credited as Lannis’ wife on IMDb), who has summoned the dead miners to kill her abusive husband. For some reason, she doesn’t stop there, and commands the spirits to kill as many of the miners as possible.

This was a disappointing development on multiple levels, but MacGuffins aside, the writers really botched the character of Lannis’ wife. Here we have a domestic abuse victim—who doesn’t even get a name despite ostensibly being the culprit—who is just further punished by her abuser when he comes back from the dead to kill her. She certainly deserves to be brought to justice for orchestrating the deaths of innocent men, and I know that this is a show that’s about the occult so perhaps her death by Coblynau rings of poetic justice, but COME ON. Who thought it was a good idea to turn a victim into a bloodthirsty killer, and then to leave her nameless?

But I forgot: we’re told that Lannis’ wife is Romani, and we all know what that means (to some people). As Constantine notes, in a slur overlooked by the network censors, “There’s nothing blacker than Gypsy magic,” so she was probably just rotten to the core. Yeah, let’s just go ahead and let negative stereotypes take the place of actual character development. And as a bonus, they might even make having a victim meet her end at the hands of her abuser a little more palatable, right?

And it’s not just Lannis’ wife—ugh, seriously, writers, get it together—who gets an inconsistent portrayal. Source material aside, we’re supposed to find Zed to be pretty badass (hence the leather jackets and sleight of hand), as well as a foil and complement to Constantine. But she’s all over the place in this episode: a little swoony, a little psychic, a little gruff, but mostly just out of place. She has the requisite mysterious past to go with her powers, but just because the audience doesn’t know who she is doesn’t mean she shouldn’t seem to either.

But let’s get back to the episode and its ending: Constantine’s voiceover indicates that, though they’re partners, it remains to be seen whether Zed’ll remain on Constantine’s good side, and he on hers. And next week, Constantine is maybe being tortured. 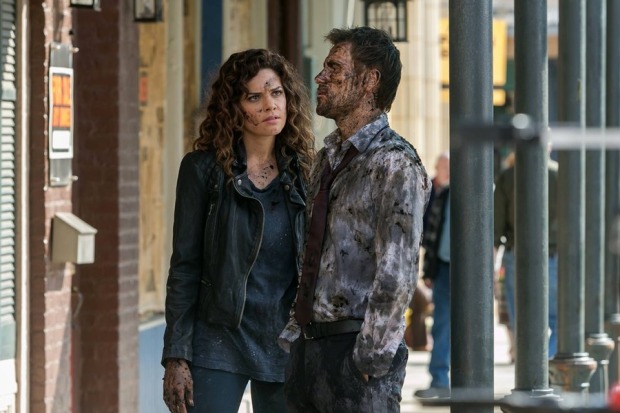 I rather dug this Moria-esque line from one of the grieving miners: “We dug a little to deep. We knocked on the door to hell and now hell is knocking back.”

But on second thought, that line just reminds me that the writers could have taken this story in a much more interesting direction.