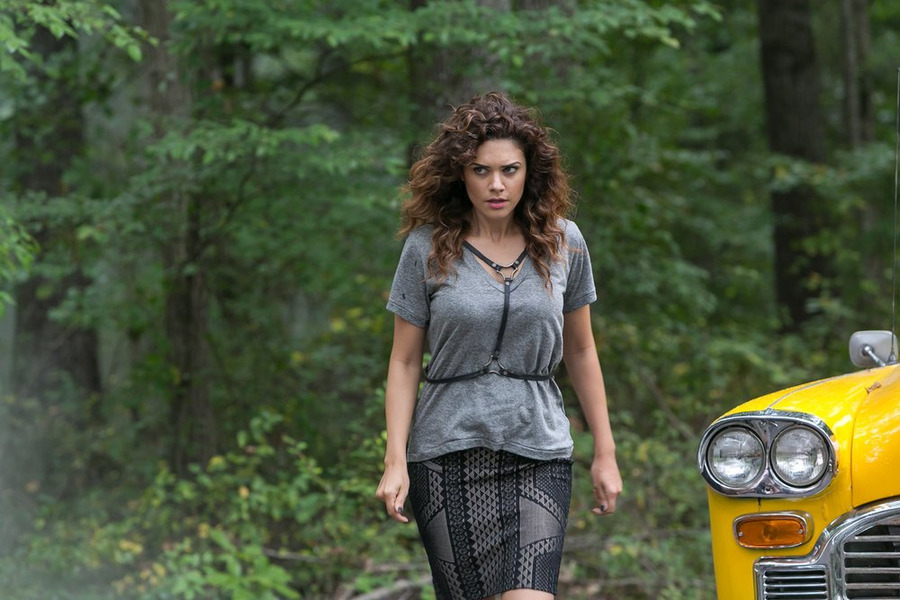 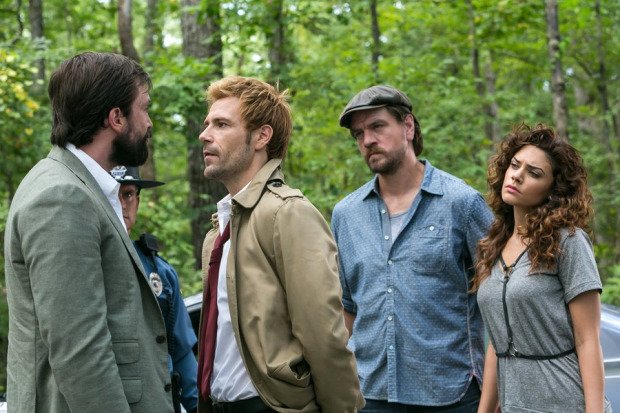 This week’s episode of “Constantine” — “Danse Vaudou” — has a lot of characters (corporeal and otherwise), a fair amount of plot, and a new city, so of course it gets unwieldy fast. But it was good to see Papa Midnite get a more proper introduction, and I enjoyed the tease at Jim Corrigan’s avenging angel future.

Following the format of previous episodes (and just about any police procedural), the opening scene is the Constantine team’s raison d’etre in New Orleans: a young woman is killed in an alleyway within earshot of a drunk detective who fires on the murderer, who is a woman in a surgical mask who seemingly absorbs bullets. The detective, Jim Corrigan (Emmett J. Scanlan), clasps his hands to his head, muttering “No.”

Then we’re in Atlanta, where Constantine & Co. are tinkering with a zoetrope that sends Zed on a psychic trip into…someone’s past; she watches a woman teach her son (presumably), Jimmy, to shoot a revolver. The mother’s advice: “Slow is smooth. Smooth is fast.” Zed comes out of the trance in time for Chas to notice that the stigmata spot above New Orleans has begun to bleed, and the team heads south to investigate the murder in the alleyway.

And what nifty netherworld contraption does Constantine use at the crime scene? A wrist cuff that’s kind of ugly, and only slightly helpful: it tells the team what they (and we) already know, that there be demons in the Big Easy. Detective Jim Corrigan is hanging around the scene in an unofficial capacity, as his story of firing at and missing the assailant didn’t go over well with his superiors. When the team introduce themselves as paranormal investigators, Corrigan is taken aback by their honesty, snarking that “Con men don’t normally introduce themselves as con men.” But he is rattled by Zed and the words from her vision. Just then, Constantine says “Don’t mind her. She’s psychic.” (I tell you, Zed don’t get no respect.)

Although Corrigan’s not entirely sold on Constantine’s theories, he grudgingly agrees to help investigate. Together, they deduce that it’s ghosts at work, not demons. And there are multiple: there’s Misaki, the woman with the shears who asks “Do you think I’m pretty?” before stabbing her victim; she was a model who committed suicide after being attacked by another model. There’s also Philip, a young hitchhiker who disappears from the car once he’s snagged a ride, causing the car to crash into a damaged tree. 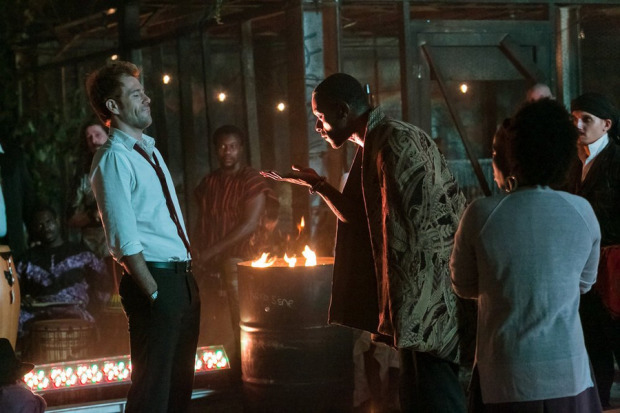 Of course, since we’re in New Orleans, all roads lead to Papa Midnite. It turns out that although Papa thought he’d just been speaking with the dead, he was actually raising them. And for his next trick, he inadvertently resurrects a woman’s cancer-ridden husband, Clarke, when she pays Papa to help her say goodbye to him. Ah, that pesky Rising Darkness–it’s throwing everything out of whack. Luckily, Papa doesn’t need much convincing to do the right thing; he agrees to work with Constantine to get these spirits back to their resting places. Constantine’s not content to just remedy the situation, and since he has Papa over a barrel, he also negotiates debt erasure (for the acetate) and a question for Papa’s “sister”.

So folks pair off or wander off: Papa Midnite and Constantine craft a customized spell together to send the spirits back to their resting places; Zed and Corrigan keep an eye out for the vanishing hitchhiker to prevent further death; and Chas goes to the alley alone for recon work, where he’s promptly attacked by Misaki, the ghost with the shears.

After their joint spell fails, Papa blames Constantine, telling him he is a “magpie of magic…a thief of tradition. You steal from other people’s cultures and beliefs.” He tells Constantine that because he is disrespectful of the Loa and other forces, his magic isn’t as strong as it could be. Constantine pretends that it suits him just fine, but then he has an epiphany. He realizes that the ghosts aren’t lingering for vengeance; they’re being held up by the guilt of the people who hurt them/whom they left behind. They make the necessary adjustments to their spell, and Constantine bows his head just a bit more than last time, and then Misaki, Philip, and Clarke complete their journey to the “other side.”

Zed found plenty to do in this episode, from manipulating info out of a police officer at the scene of a crash to staking out spirits with Corrigan. And speaking of Corrigan, he turns the tables on Zed, spooking her when he asks why she changed her name. You see, he recognizes her from a missing persons report. Zed cops to shoplifting at a gas station, but it’s all kind of pointless, because Corrigan drops the matter just as quickly as he brings it up. He tells her he destroyed her missing persons file, then displays a little southern charm by bending to kiss her hand. Of course, the physical contact triggers a vision, and Zed sees him bleeding as well as glowing green. She wipes away a tear when he asks if she’s OK, but she doesn’t tell him what she saw.

How well do you think the team worked together this episode? Did you pick up on Jim Corrigan’s alter ego right away? Tell us in the comments!

I kind of love Constantine’s “working class” approach to his powers; he’s not concerned with birthright, just in doing right.

If they had just thrown in a reference to the Green Ribbon, we’d have had quite the “Scary Stories to Tell in the Dark” collection.