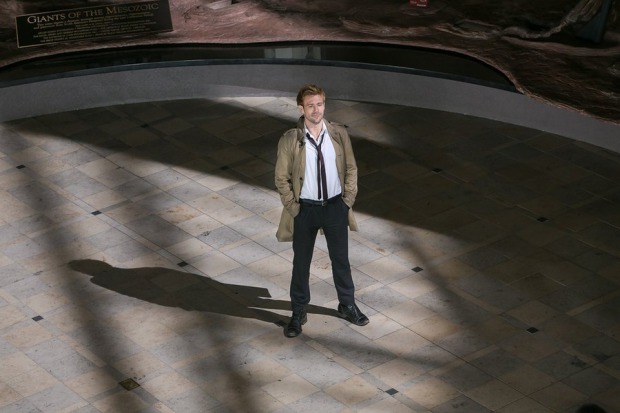 I’m not sure I could grade an episode of “Constantine.” Every episode so far has had an equal number of highs and lows, which would seem to average out to 50/50, but a 50 is a failing grade, isn’t it? And I don’t think any episode has been a total failure (racist remarks aside). But if I were grading, “A Feast of Friends” would definitely raise the average.

A wan, sweat-drenched man (Jonjo O’Neill as Gary “Gaz” Lester) tries to make his way through U.S. customs in Atlanta only to be “flagged” by airport security. The TSA agent doesn’t believe Gaz’s “just passing through Sudan” story, even after a scan of the relic-looking bottle he’s carrying fails to turn up anything untoward. Gaz begs the agent not to open the bottle, so of course the agent opens it, and he ends up swallowing Gaz’s story after all; that is, a swarm of khapra beetles.

I know it’s probably not the first question that comes to mind after seeing a bunch of bugs go down a guy’s windpipe, but why is Gaz in Atlanta? Well, it turns out he was a member of the Newcastle Crew, so he’s there to get Constantine and Zed’s help (I don’t remember what errand Chas was conveniently sent on).  John’s not happy to see him—he thinks Gaz is a screw-up, and a drug addict to boot. Gaz protests the characterization (too much, as it turns out), and finds a sympathetic ear in Zed, who literally gets contact highs (and withdrawal symptoms) from touching him. 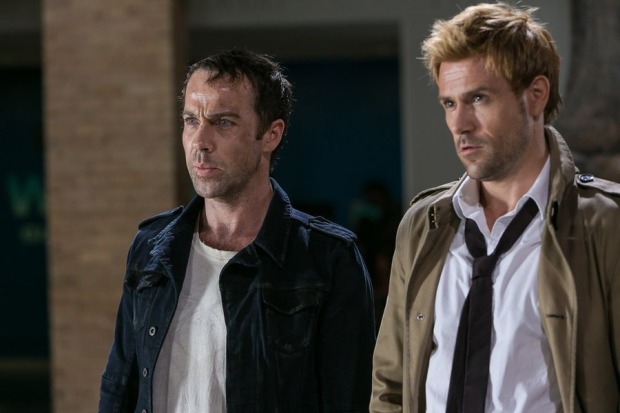 We learn that the beetle swarm makes up the hunger demon, Mnemoth, who is also riding the “Darkness is rising” wave that has bolstered the other evil entities we’ve encountered so far. Mnemoth had been imprisoned inside of a young man by a shaman; Gaz recounts finding this poor, tongue-less (the shaman’s insurance against being cursed by the demon) man in Khartoum and recognizing the containment symbols on his face. Gaz finds a different vessel for Mnemoth (the fancy old bottle), but the young man dies during the transfer. Then Gaz flies to Atlanta and, well, see above.

The demonic possession turns host bodies into ravenous monsters who take chunks out of everything and everyone around them. No host body lasts long as it is eaten from the inside out by Mnemoth, who promptly inhabits the nearest living human ad nauseam. Constantine’s not cowed and tries to take on Mnemoth alone, armed with a bottle marked with the Seal of Solomon—which is handy if you’re looking to “trap genies,” but apparently not enough to contain an insatiable and malevolent being.

Constantine’s not too happy about admitting he needs help, so he yells at Gaz some more for being a screw-up, and Zed tells him not to be too hard on his friend. John laughs at the idea that Gaz is his friend, explaining that they’ve used each other—he needed Gaz’s money, and Gaz needed Constantine’s street (occult?) cred. Then after a literal and figurative trip, Constantine seemingly has a change of heart and enlists Gaz’s aid: first, in stealing a kusa sword from a museum, then in confronting the demon at an Atlanta landmark. 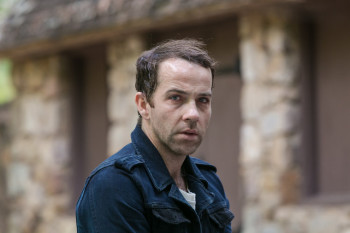 Of course, in the denouement, we learn that no one’s changed: Gaz is still a drug addict, and Constantine never stopped believing that. And even though Gaz meant well in Khartoum, he screwed up again. So John reveals his plan to repeat the shaman’s actions and half-heartedly offers to draw straws with Gaz to determine who will be the human sacrifice. So poor Gaz sorta pulls a Sydney Carton and offers up his body, even though he knows it means unbelievable pain followed by death. In the closer, we see Constantine holding Gaz’s hand, the latter strapped to a bed and writhing in agony. Then Manny the Angel shows up and kneels at the bedside, and we can breathe just the tiniest sigh of relief that Gaz’s pain is over.

This probably sounds like it was hard to watch (it kind of was), but it was also the best episode so far. It was the first to lift its inspiration and plot from the Hellblazer series (issues one and two). Most importantly, it demonstrated just how tricky working with—hell, even just knowing—Constantine is. Ever since the premiere, John’s been telling anyone who will listen that people have a habit of dying around him, and dying because of him. The most egregious examples, though, have been prompted by his arrogance; his cockiness led to Astra’s death as well as Gaz’s. At least Gaz sort of made that choice for himself, though there’s no denying that Constantine played him like whatever instrument he played in Mucous Membrane.

The less said about Zed, the better. I really don’t know where this show is taking that character.

Museums are institutions of learning, so Gaz really should have taken a look at the placard inside the display he broke into.

What did you think about Gaz’s sacrifice? Do you think he made the decision on his own? What grade would you give the episode?