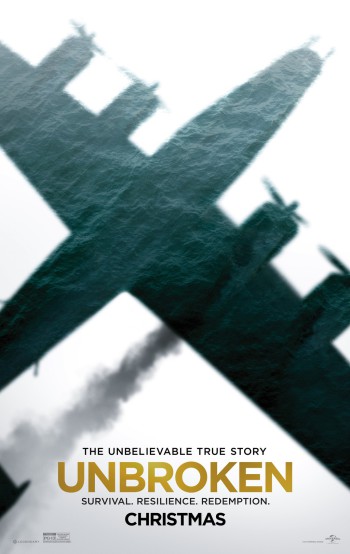 This is really cool, and a great way to recognize our veterans. In honor of Veterans Day, Universal Pictures is recognizing former Olympian, WWII veteran and POW survivor Louis Zamperini and other heroes like him who’ve served or are currently serving in the military.

You can join them by taking part in the #IAmUnbroken project, which celebrates and inspires unbroken spirits from all walks of life and invites users to share their own #IAmUnbroken stories.

Go to www.IAmUnbroken.com to upload your videos, photos and text or take to social media to post your inspirational story with hashtag #IAmUnbroken.

Stories are now being featured on the site, and a select few will be chosen to have a team create a professional video segment of their story with the chance to be featured on NBC’s “TODAY.”

Based on the book by Laura Hillenbrand, who also wrote “Seabiscuit: An American Legend,” and directed by Angelina Jolie, “Unbroken” follows the incredible life of Olympian and war hero Louis “Louie” Zamperini (Jack O’Connell) who, along with two other crewmen, survived in a raft for 47 days after a near-fatal plane crash in WWII — only to be caught by the Japanese Navy and sent to a prisoner-of-war camp.

It’s an inspiring true story about the resilient power of the human spirit.

Starring alongside O’Connell are Domhnall Gleeson and Finn Wittrock as Phil and Mac — the airmen with whom Zamperini endured perilous weeks adrift in the open Pacific — Garrett Hedlund and John Magaro as fellow POWs who find an unexpected camaraderie during their internment, Alex Russell as Zamperini’s brother, Pete, and in his English-language feature debut, Japanese actor Miyavi as the brutal camp guard known only to the men as “The Bird.”

The film is produced by Jolie, as well as Clayton Townsend (“This Is 40”), Matthew Baer (“City by the Sea”) and Erwin Stoff (“The Day the Earth Stood Still”). Leading the accomplished behind-the-scenes crew is 11-time Oscar-nominated cinematographer Roger Deakins (“Skyfall”).

Academy Award winners Joel and Ethan Coen (“No Country for Old Men”) rewrote the screenplay from earlier drafts by William Nicholson (“Les Misérables”) and Richard LaGravenese (HBO’s “Behind the Candelabra”).