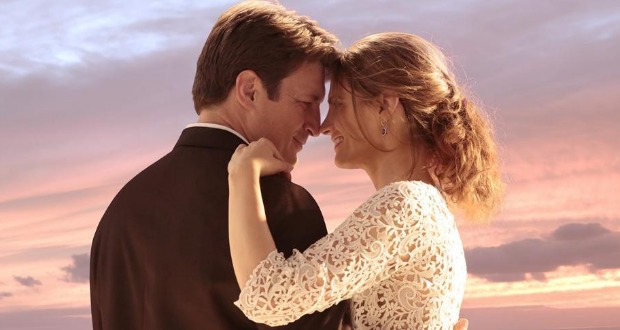 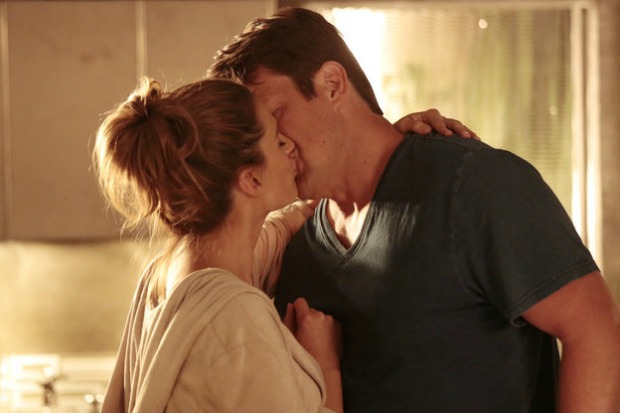 I know all you “Castle” fans are as happy as I am! Castle and Beckett finally tied the knot with just family surrounding them, at his fabulous home in the Hamptons! Yay!

This episode was very clever, as they always are. After the crime was shown, it flashed to Castle’s condo with the two of them in the kitchen after Castle, for the fourth day in a row, couldn’t sleep. The anxiety of still not knowing where he was for two months and the two not getting hitched were weighing on him. They talked about where their lives might be if they hadn’t met. Castle winning a Pulitzer (which he still might) and Beckett working her way up to captain.

Beckett’s phone rang — it was a call about a crime. At the scene, Castle was thrown into a dreamworld where he saw what life would be for them both if they’s never met each other – boring and unfulfilled is what I saw. The twist of the show was Castle helping the team solve the case they were currently working on (in real life), but in a dream, where Beckett, Espo, Ryan and the gang didn’t know who he was.

Of course he thought they were pulling a fast one on him again, like they did for his birthday – which was such a great episode. He soon realized they weren’t and used his boyish charm, smarts, and wit to win Beckett (and Ryan) over – again. Espo was harder to convince, which lead to fun interaction and dialog between the two – including Castle calling Espo out for  having commitment issues with Lanie. It was cute, wasn’t it?

When Castle finally came out of his dreamworld (back at the crime scene), he realized his life would not be better or fulfilling without Beckett in it – and he let her know by asking her to marry him, again. Beckett answered, “I already said yes.” Then Castle said, “Will you marry me right now?” She was thrilled…

The next scene was at his beautiful Hamptons estate. What a place, right? They both looked so happy and it was fitting, yet a little sad that only Martha, Alexis and Beckett’s dad were in attendance. It seemed that Lanie, Ryan and Espo should have been there.They are like family too, don’t you think?

I’m sure Castle could have flown everyone up on a private jet. (Kate, besides being very happy with Castle as your life partner, you’re going to have quite the perks. Cheers!)

Here are some excerpts from their vows:

Beckett: “…I love you Richard Castle, and I want to live my life in the warmth of your smile and the strength of your embrace. I promise you I will love you, I will be your friend and partner in crime and in life, always.”

Castle: “…You are the joy in my heart. You’re the last person I want to see everynight when I close my eyes. I love you Katherine Beckett and the mystery of you is the one I want to spend the rest of my life exploring. I promise to love you, be your friend and partner in crime and life, ’til death do us part and for the time of our lives.”

Okay, are those sweet or what? They are so cute and right for each other. I love how Kate really let her guard down after realizing and admitting her love to him in that beloved season 5 finale. You can really see the love for him, and that makes me happy (as corny as that sounds).

Will Martha still live with Castle and now Beckett? That would be weird.

Are we going to see a wedding with Espo and Lanie by the end of the season?

What is Castle’s childhood secret? That will come to play later this season, I’m sure of it.

Did you like how this episode of “Castle” played out? Are you happy the two are finally hitched? Can’t wait for the honeymoon episode – it looks like fun. Leave thoughts below.