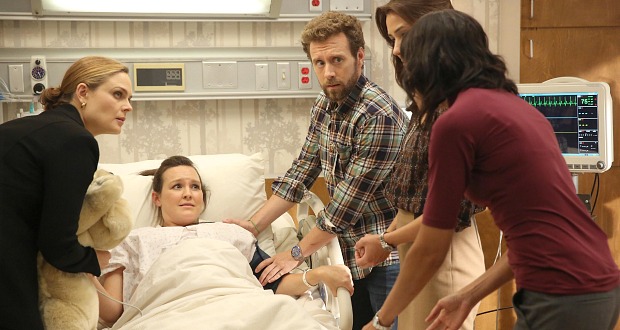 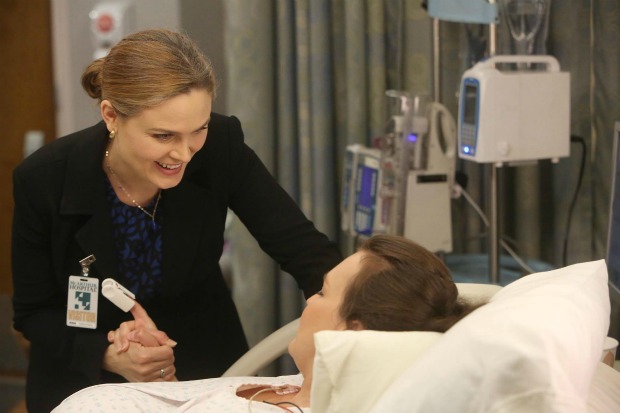 We all knew that Daisy was going to have Lance’s baby in this episode of “Bones.” It still hurts that Sweets (John Francis Daley) is gone, but at least he will have a child to carry on his legacy. It wouldn’t be right any other way.

At the lab, the team has the body of a puzzle master that was found at a fracking site. A cast on his arm had some clues written in crossword style, but nothing that led the team anywhere. Daisy, who is very pregnant, was back to work, but seemed different. Her “vib” was very un-Daisy like. The loss of dear Lance had changed her her – she’s still dealing with his death. I can’t imagine how hard that would be in real life to be pregnant and then lose your partner. It would be horribly sad.

A funny injection to Daisy’s story line was that she had hired a doula – oh no. Oh yes, and it was funny.  Valentina (“The Facts of Life’s” Mindy Cohn), was great in her role — silly, irritating (even to Brennan) and earthy. More on her later.

Back to the murder investigation. Booth and Aubrey interviewed Lawrence Brooks’ wife, Emma. She told them she thought his assistant, Alexis, might have something to do with his murder, because she always resented that she never got to write her own puzzles. She did tell them that Brooks got a message that was somewhat threatening – it was from Emory Stewart.

As a suspect, Stewart was a good kid and citizen. Then his parents died and he turned dark. He became violent and had a record. He was also thought to have been stalking Lawrence Brooks. He was even writing a book on Brooks. That seemed odd. Anyway, he told the team about a Donald McKeon, who was an old roommate and competitor of Brooks. He was staying at the same hotel where the angry message to Brooks had come from. He did say he called, but it was to take legal action. He claimed that Brooks had published his puzzles, that he was stealing them. I still didn’t think he was the murderer.

The team figures out that a head trauma and a chemical they found in his bones led to Alzheimer’s. Booth and Aubrey met with Emma again, and she confirmed that a boating accident had led to early onset Alzheimer’s. Sad. She also admitted to publishing his crossword puzzles for him (he was losing his memory and not writing the same anymore). She accidentally published one that Donald McKeon had sent Brooks, which led McKeon to think Brooks was stealing his puzzles. She was publishing puzzles because they needed money. They were broke. How, though, were they worth over a million dollars?

Lawrence had been gambling online. Aubrey finds the bookie and meets with him. The bookie told Aubrey that it wasn’t Brooks who did the betting, it was his assistant, Alexis. Ah ha! She started using his money to pay off her debts when she found out he had Alzheimer’s. She gambled his money away, but she swore she didn’t kill Brooks.

A cool scene was when Aubrey shut Booth down on his plan to set up a gambling sting. Booth wasn’t happy with the way Aubrey was talking to him, but then Aubrey told Booth that Sweets documented things very thoroughly (of course he did) – including Booth’s gambling addiction. Aubrey wasn’t about to let Booth get anywhere close to gambling. I loved it, and I think Booth did, too. He knew Aubrey cared, and it meant a lot to him.

At the hospital, Daisy started going into labor. Brennan, Angela, Hodgins and Cam were all there. Booth was on his way. Daisy starting moaning, yelling and showing that she was in pain! The annoying doula showed up (no offense at all to women who use doulas), and Daisy finally realized that she wanted drugs, shiny machines and to yell! Go girl!

Valentina: “I really have to put my foot down, the shrieking…” Daisy interrupts: “…get your crystals and get the hell out.” Tell her Daisy! Now you can start to deliver baby Lance!

Brennan was a real trooper; holding Daisy’s hand and helping to lead her through. She also distracted her by asking questions about the murder. All of the team joined in. Daisy ended up figuring out the murder! Yay Daisy!

Aubrey meets again with Emory Stewart. He was adopted as a child and was actually Brooks’ biological son. He found out and tried to meet with Brooks. When they met, Emory was mad that Brooks acted like he didn’t even remember. Emory was irritated after Brooks freaked out, pushed him and broke his neck. Unfortunately, Aubrey had to tell Emory that Brooks wasn’t rejecting him, but that he had Alzheimer’s.

The delivery scene was very touching. Daisy insisted that Booth be in the room, too. She said Lance would have wanted it. After going through pain and agony that we moms know, a little boy came out. Ah, so sweet. “What’s his name?” Daisy replied, “Lance insisted that his first name be Seely. Seely Lance Wicks Sweets.” It was so touching for Booth and for all of them. I have to admit that I teared up. Then Daisy wanted Booth to be the first to hold him. Sweets would have loved that.

What did you think of this episode of “Bones”? Did you love the birth scene and naming the baby Seely? I thought it was great. Please leave any comments below.