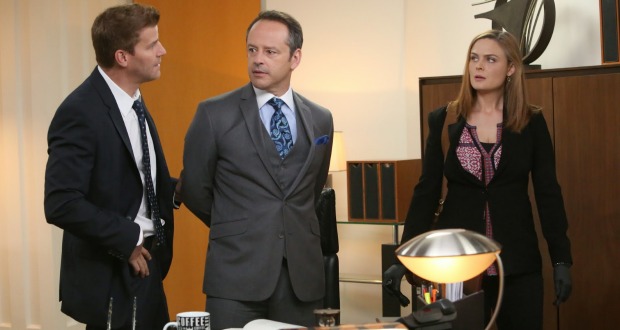 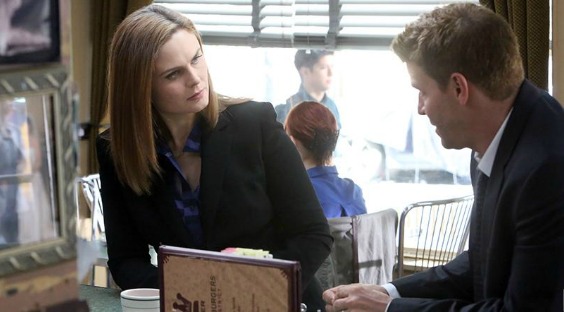 This episode of “Bones” started with a group of divorced men watching their kids at a playground. Unfortunately, a skull went flying out from under the merry-go-round, ruining everyone’s fun! I’m always curious about how each episode will begin … always gruesome, but with a twist of humor.

The dead guy was a stockbroker (Toby Wachlin), which brought up some unsettling feelings from Aubrey’s past. Aubrey’s dad was a broker who was arrested for securities fraud. He made a fortune at the expense of his clients, jumped bail and left for Croatia, leaving 13-year-old Aubrey and his mother alone. No wonder he let out his anger to Booth and at the perp, although inappropriate and unprofessional. Booth was good with him, and Aubrey is learning from his mistakes. I like the kid. I think he’s a good addition to the show, although nobody will ever replace our beloved Sweets.

At the lab, the annoying Dr. Wells is back, irritating and challenging Brennan for the top spot. Right, like any squint will ever de-throne her. I have to say, though, all of the squints – Daisey, Clark, Arastoo, Windell, Mr. Nigel Murray – have  been brilliant – but never better than the queen bee herself. Throughout the show, Wells attempts to one up Brennan, but can never quite top her. That brings a smile to my face.

At home, Booth and Brennan deal with Christine’s first bout with swearing. She called her bunny a jackass. Ah, the memories came flooding back for me, remembering (which wasn’t that long ago) hearing my kids swear for the first time – LOL. I took Booth’s approach – it’s not something a child at that age should be doing, although Brennan thought differently, until Christine called her a jackass. I laughed out loud at that. More later.

Booth and Aubrey visited Toby’s boss at Horizon Equities. He came off as a very arrogant rich guy (which he was). He said Toby had made a lot of money for him, but also lost a lot. The conversation went nowhere really. They also interviewed a co-worker, Blair Ellis, also an ex-athlete (he had anger issues). I thought it might be him, because it would have been too obvious being the wife or boss – although they had motive.

Back at the lab, Dr. Wells really irritates Brennan, and she says to him, “You are a pain in my ass,” to his surprise. Very funny – Cam liked it too. He made it very clear that he wanted to solve the murder, and be “the man,” which is not a good idea trying to upstage your boss. Hello…

Brennan shows why she’s, well, “Brennan.” She spots a tiny particulate in the bones, which happens to be part of Blair’s athletic ring. He had one of his angry fits, and smashed Toby’s head against a table. He was trying to teach the guy loyalty. Well, that didn’t work, did it? Yikes. And yes, Brennan is still top dog at the lab, right, Dr. Wells.

After the case is solved, Brennan has a nice talk with Aubrey about her experience with Max. How she was left at the age of 15 and has never forgotten it. It was a nice moment where both got to know each other a little better. I am hoping we learn more about Aubrey’s past and what lead him to work for the FBI.

The last scene was very funny, wasn’t it? Brennan saying goodnight to Christine, and Christine saying “Goodnight, jackass.” LOL. Well, Bones, it’s not okay if she swears now, is it? Booth was loving it. I loved his face when he and Christine sat on the sofa and waited for Brennan to give her a lecture. His “I told you it wasn’t okay for her to swear” face was priceless.

Oh, one other thing. Did that party scene seem like a toned down version of the party in “The Wolf of Wall Street?” Those stock brokers!

Did you like finding out a little about Aubrey’s past? Do you want him to stay on “Bones”? I am really excited to see Daisy give birth to baby Sweets, although sad that Lance is gone.