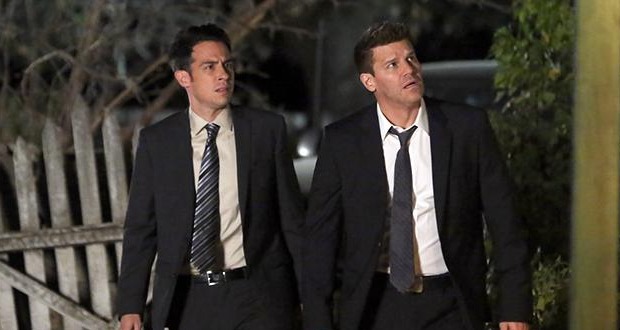 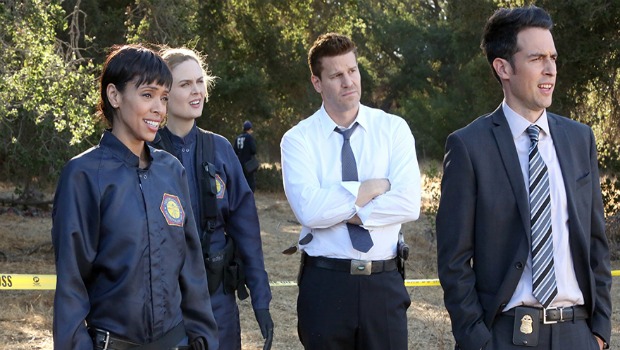 This week’s episode of “Bones” — “The Love Lost in a Foreign Land” — addresses the subject of human trafficking. One thing that I’ve always liked about “Bones” is that it addresses important subject matters that aren’t always popular to talk about. Animal rights, human trafficking, cults, religion, child abuse, and organ harvesting have all been covered on “Bones.”

In this episode, the team is dispatched to a body that was found on the side of a road. Unfortunately, goats ate the victim’s clothes, along with other personal effects. After getting the body back to the lab, they discover that the woman, Teresa, is of Chinese descent. A watch that was found at the scene is traced to Sandra Zins (“Downton Abbey’s” Phyllis Logan), Teresa’s boss (Teresa was Sandra’s maid). Sandra tells Booth that she hired her through the agency Sunny Helpers. Victor Lee was the contact who took care of everything – and I mean everything. More later.

Going backward, the first scene has Cam and Arastoo in the bedroom. Woo woo. They discuss his upcoming dissertation, and Arastoo is surprised that his mother has been e-mailing Cam her recipes – one that happens to be a complex dish served at weddings. Unfortunately, Cam hurt his feelings by saying “if” we every discuss it (marriage), not “when.” He was a little hurt and disappointed. I think Cam may have used the word “if” to protect herself. I do predict that they will get married this season. What do you think?

Meanwhile at the lab, Brennan doesn’t approve Arastoo’s dissertation subject matter, which leads to a confrontation with Cam. Cam asks Brennan why she didn’t approve it. I thought that too — why? Well, of course Brennan always has the right answer, “A dissertation by someone as accomplished as Mr. Vasiri should lead research in a new direction.”

Why are you always right? Oh yeah, because you’re Brennan. Cam still wasn’t very happy, and later got into trouble with Arastoo for butting in. We know guys don’t like that, right ladies? Just ask my husband.

Back to Victor Lee, who seemed to be a good guy who wanted to help these poor women get an opportunity. But later, we find out he is huge component behind the whole human trafficking ring. He tried to blame one of Min-Yung’s (Teresa) client for the assault on her, but the client said he never touched her and gave Booth and Aubrey information about the bus she always rode. Particulates that Hodgins found trace to a cave, which is — of course — on the bus route. I don’t know how they think of these things.

Booth and Aubrey stop at a house on the bus route and find Victor Lee hiding many women — his slaves — in a cellar. Ugh – women trying to get a better life, being lied to, abused, and enslaved. Aubrey was so mad and disgusted. I loved seeing his emotions come out.

Min-Yung’s boyfriend (who they think is the killer) is questioned. He admits to killing Min-Yung’s father – because he was abusing her, selling her to men in the village. He left for the states to make money for a new life for them, but also became a victim of slavery. It was so sad, he realized that Min Young came to the states to find him, but ended up an abused slave, too. He was very sad, the poor guy.

What had to be one of the saddest scenes is when Booth and Brennan figured out that Tammy (American name) was the one who killed Min-Yung by stabbing her with a cuticle pusher. Tammy was one of the slaves hidden with Min-Yung in the house. She tells B & B about how Min-Yung was sneaking out to look for Sung. Victor caught her and beat her, but also told her that if she kept sneaking out, the rest of the slaves would be punished – which meant hurting their families back home, which included Tammy’s eight-year-old daughter. Have you ever heard the term “Mama Bear.” I know exactly how Tammy felt. A momma will do anything to protect her child. In this case, she killed Min-Yung.

It was really terrible, a lose-lose situation, and brought to the forefront the many terrible layers of human trafficking. It’s a sad and sick reality. I hope and pray more attention is given to it, and that governments will do something to help stop it. I know, easier said that done.

Cam and Arastoo make up. They both apologize and may talk about “you know what!” Booth and Brennan have a nice dance, realizing the magnitude of the case and how lucky they are. What a nice ending to a disturbing, but important storyline.

Angela to Hodgins: “I just want to go home and give Michael Vincent a hug.”

Booth to Brennan: “Don’t ever let me take any of this for granted, Bones – how lucky we are.”

What did you think of this episode? It was pretty eye-opening for me. Are you excited for the 200th episode?! Leave comments below!