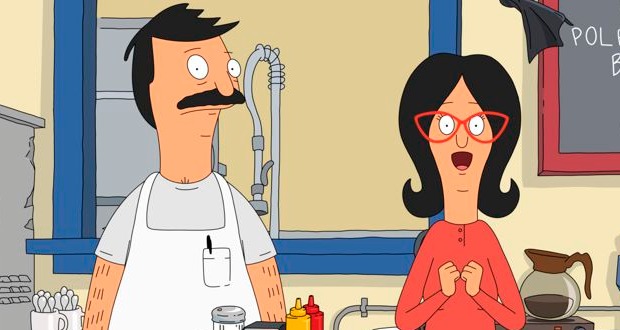 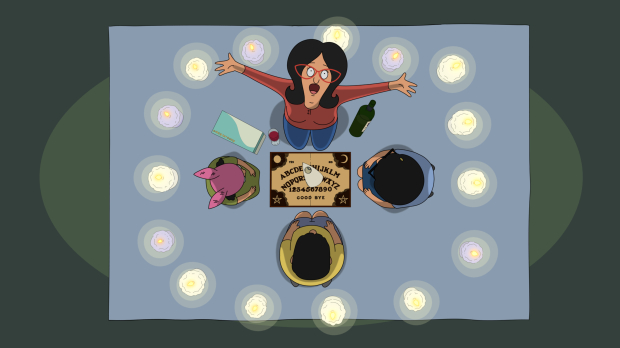 I was as excited as anyone to watch the conclusion of the 2014 World Series, because it meant the return of “Bob’s Burgers”! Well, until the next NFL game anyway. Fox has placed the Belchers squarely in preempting territory by running it in the 7p ET Sunday slot. Maybe “Bob’s” recent Emmy win for outstanding animated series will secure a little more confidence going forward.

A month passed between the season premiere and “Tina and the Real Ghost” (Ryan Gosling reference #1), but the show doesn’t miss a beat. We open on The Belchers Three walking the Wagstaff hallway, where Gene and Louise are complaining about the “ordinary food” (like bread) that must tide them over before their Halloween gluttony. But Tina wants to join Jimmy Jr. and the other kids from her grade at the cemetery for some light vandalism, i.e., breaking into a mausoleum. “It’s a rite of passage,” Tina and Jimmy Jr. agree, but then Jimmy won’t agree to arrive with Tina. Louise comforts (and goads) her, telling her that “He was all over you.”

At Bob’s Burgers, Bob and Linda are dealing with a bug infestation and an ineffectual exterminator, Marcus, the Winston Zeddemore stand-in who balks at working in Bob’s “haunted” basement. Marcus tells the Belchers they have a ghost, and that the “phantasmal bugs”—which Bob insists are real—are its doing. Marcus gives some tips on how to “catch and release” the spirit, and the Belchers get to work.

Armed with candles, a shoebox, smooth jazz (Gene’s contribution), and some “séance wine”, the family, sans Bob, makes a Ouija call to the wayward ghost, who turns out to be a 13-year-old boy named Jeff. The kids take Jeff to school the next day, and he quickly becomes the most popular kid in school. Sure, kids like Zeke are initially skeptical about Jeff’s existence (“Death is the end. High-five!”), but another Ouija session, and the knowledge that ghosts eat soup, wins them all over. Soon, Tina is dating Jeff, much to the pleasure of her parents (well, just Linda) and all of her classmates. 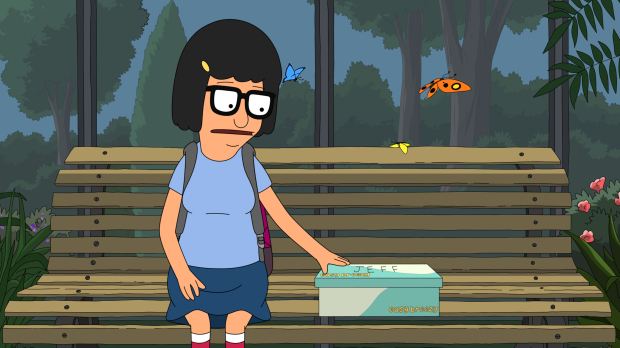 All except Tammy, that is, who is jealous of Tina’s elevated social status. Tammy “steals” Jeff from Tina, and even details his change of heart in a message written in steam on the mirror in the girls’ bathroom at school. Tina collapses into a puddle of what might be urine, and Louise again tries to comfort her big sister, as Gene says what we’re all thinking: “Jeff’s a scoundrel.”

It turns out Louise was behind the planchette and therefore Jeff. She comes clean to everyone but Tina, and then she and Gene follow the pre-teens to the cemetery to get back at Tammy. But Louise’s scheme just involves putting some of the phantasmal bugs (which turned out to be plenty real) into Jeff the Shoebox. It’s Tina who plans and executes a terrific prank, scrawling a scary message on the wall and pretending to lock the kids into the crypt. She admits she knew that Jeff wasn’t real when she overheard her family talking about how he wasn’t real, which prompts everyone else to confess something (apparently, Zeke has wildly conflicting beliefs on the afterlife).

There’s a lot going on here aside from the jokes, and the shared delusion among the kids that eventually spreads to the adult patrons of Bob’s Burgers takes up a lot of story. But Tina’s the star; although we immediately knew she would fall for Jeff the Ghost/Shoebox, the way she gives up the ghost is simultaneously true to her character and a progression. Tina admits that what she wanted from Jeff was constant attention, but then decides that she can give that to herself. We’ll see how long Tina remains an island, but for now, it’s encouraging to see her as something other than boy-crazy. 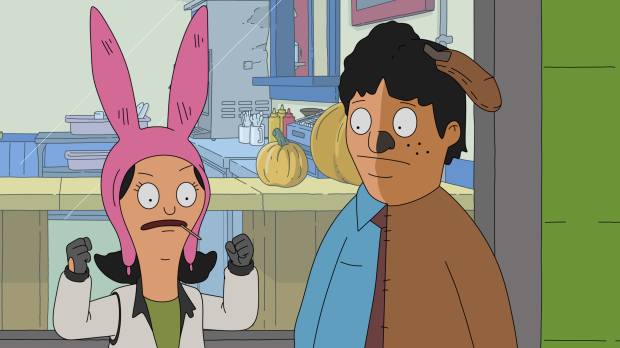 Which Belcher kid had your favorite costume? And did you feel shortchanged by the number of “Ghostbusters” references?

The Human Polenta-pede might be the least appetizing daily special yet.

Ryan Gosling reference #2: Louise dresses up as his character, the Driver, from the movie “Drive” for Halloween.

“She got catfished by a box.”—Gene, on the hoodwinking of Tina

“The butterflies are beautiful this time of year. They’re caterpillars the rest of the year,” Tina so astutely observes while on her first “date” with Jeff.