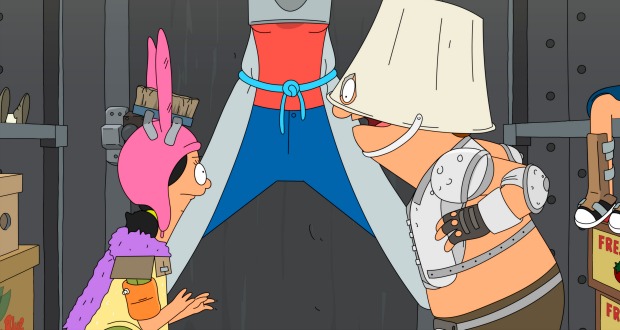 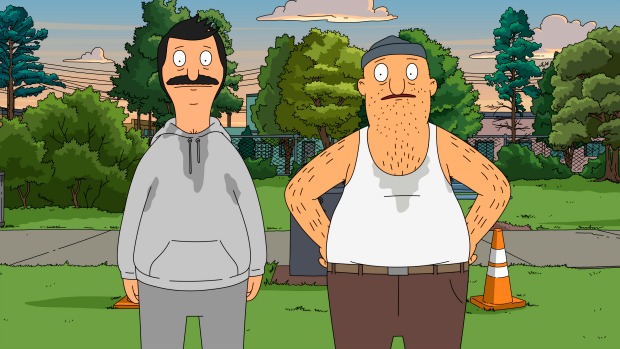 Let’s skip past any grumbling about waiting 2 to 4 weeks between “Bob’s Burgers” episodes because Fox recently announced that they’re moving the Belchers to a real primetime slot: 9:30/8:30 Central. Say it with Linda, folks: All right!

The show follows up a Tina-centric episode with a closer look at Bob’s relationships with his customers, specifically Teddy, whose ever-constant presence at the counter has been pretty fun for the viewer and lucrative (probably) for Bob. But his “burger a day” regimen has taken a toll on his health. He tells Bob and Linda (and Mort) that his doctor says Bob’s burgers are killing him. Everyone’s horrified by Teddy’s eating habits (a little disingenuously, I think, since they serve and/or eat with him daily), even Mike, the mail guy with unremarkable calves. Teddy can’t believe the Belchers don’t eat their own food regularly, and that’s when we learn how they cut loose: “We eat off menu. It’s how we have fun,” says Linda, before muttering, “Kill me.”

Later, Bob has a nightmare involving shoving burgers directly into Teddy’s heart (ewwwwww). He confesses his guilt over “killing Teddy” to a sleeping Linda and she reacts quite pragmatically, murmuring that the car does have a full tank of gas, and she could always home school the kids. Bob is impressed and a little appalled that Linda could throw together a post-homicide plan so quickly, but she shrugs off the compliment. Bob vows to Linda and the kids that he’s going to help Teddy get healthy, and they tease him about his “friend.” 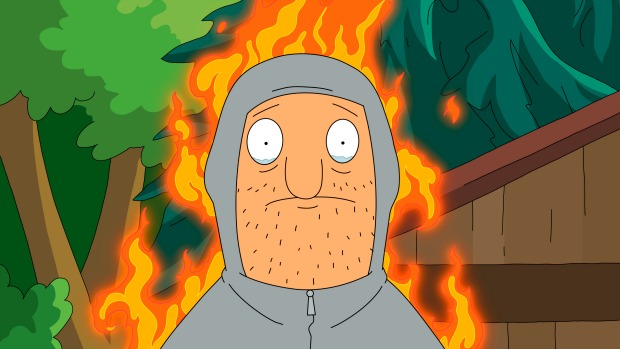 Bob and Teddy take up jogging and stumble across a fake stuntman training session in the park. And because I can already hear you asking, fake stuntman training is for people who want to train like stuntmen (and women, I’m sure, but there aren’t any in this episode) but not do actual stunts. Bob’s amused at the sight, but Teddy is delighted and signs them up for an intensive weekend boot camp. The news prompts Linda to compose a Harry Nilsson-like tune for the bosom buddies, with lyrics about taking a knife in the gut and feeding soup to each other.

The weekend’s a bust, though: Bob, worse for wear after being thrown down concrete steps and “chased” by aliens, tells the camp instructors (Tim Heidecker and Keegan-Michael Key) that Teddy’s his best customer, not his best friend. Poor Teddy hears this and would probably blush in humiliation if he weren’t being set on fire.

Bob tries to apologize, but it’s too late; Teddy switches his allegiance to Dusty’s Feedbag and its belt buckle belly buster, a five-pound burger. Bob tries to reason with the manager (Kevin, not Dusty; Dusty’s is a chain restaurant) who argues that they’re all consenting adults. Things escalate, and then Bob gets to put his fake stuntman training to use when he’s thrown through a real window onto pavement of the unpadded variety. After seeing proof that their friendship is real, Teddy drives an injured Bob to the restaurant and not the hospital, despite Bob’s pleas.

And what did the rest of the Belchers get into? The kids, inspired by freezing-farts-for-alien-posterity shenanigans, turn the walk-in freezer into a tiny ice rink, or “Freezerdome,” a name Linda so helpfully contributes, along with costumes for the kids and their friends. They square off in pairs, some fighting for Linda’s love (which she encourages) and others for bragging rights, but all of them want the championship belt (no, not that one). Zeke’s low center of gravity (or mass) takes him far in the tournament, but the trio of Louise, Gene, and the fart that “killed the dinosaurs” knocks him on his duff. Hooray for happy endings!

Teddy once played Blake in a contractors’ union production of “Glengarry Glen Ross.” I guess his acting career didn’t end with the shark movie.

I forgot to take note of the Burger of the Day board, so I missed out on any puns. Well, Bob’s puns.

What would your Freezerdome name be? And how catchy was Linda’s “best buds” song?