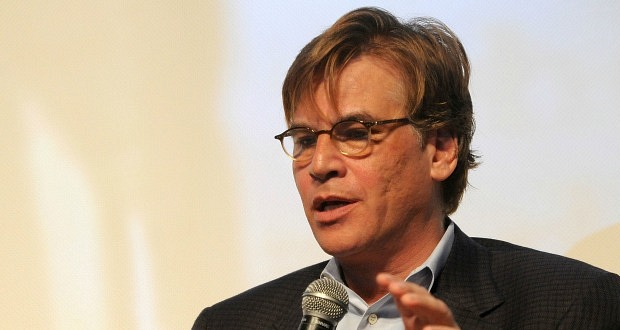 Aaron Sorkin, the creator of “The Newsroom,” participated in an interview for guests after a special screening of the second episode of the third and final season of the political drama, which chronicles the behind-the-scenes events at the fictional news channel ACN, anchored by a steely Will McAvoy (Jeff Daniels). The cast also incudes Emily Mortimer, Alison Pill, Thomas Pill, Chris Messsina, Olivia Munn, Sam Waterston, Jane Fonda and John Gallagher.

Sorkin, best known in television for the political drama series “The West Wing,” wrote the script for “Moneyball,” and also nabbed an Oscar for his script for the movie, “The Social Network.” Currently he’s at work on an untitled Steve Jobs project, rumored to star Michael Fassbender.

The handsome and affable 53-year-old writer said the final season of “The Newsroom” is his best, that he finally found his writing groove. “The first two seasons I just never felt comfortable in my chair. I was able to write a good scene, a good moment, but I was never able to put it all together and write the show that was in my head. This season I was able to do that.”

As for what inspired “The Newsroom,” he explained, “roughly the same thing as the ‘West Wing.’ It felt like journalism was being held in lower esteem than politics – if that was possible – and in many cases, deservedly so. So I thought, gee, I had met reporters who aren’t cynical, who aren’t ratings driven, who want to tell you the right stories and the whole story and tell you the truth, whether it’s boring or not. Obviously they’re up against huge forces going the other way.”

His previous television shows also include “Studio 60 on the Sunset Strip” and “Sports Night.” “I like workplace shows,” Sorkin noted. “There’s a kind of a base note theme that runs through the stuff that I write, which is that it’s okay to be alone in the big city if you can find family at work.”

He also explained why “The Newsroom” deals with actual news events, even if they seem a little dated. “I didn’t want to invent news,” Sorkin said. “It felt to me like it wouldn’t feel like the world we were living in if suddenly we invented the past.” During the months and months the show was gestating, he explained that he hung out with news people, including Keith Olbermann of “Countdown,” which is now off the air.

Sorkin noted that news department executives are too fixated on ratings. “I’ve now been around journalists both in front of the camera and producers and executives for a while, and I have to tell you that there is much, much discussion about ratings in the news business than there is in the commercial television business.”

He added, “On ‘The West Wing’ our ratings would go up and down, and we never made a single creative decision based on, well, let’s see what the ratings are.”

Sorkin said criticism of the show that he was trying to show news professionals how to gather and convey the news was “silliness.” He added, “One of the reasons why news is held in low esteem is because new media wants it to be held in low esteem.”